Bringing a vision into view 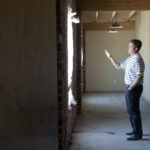 Tony Krsnich, a Kansas City-area developer, is leading a project to convert the 1904 Poehler warehouse building into 49 apartments. Work started on the project in January and already is 70 percent complete and plans to be open by this summer. Now Krsnich is envisioning other projects in the area near Eighth and Pennsylvania streets.

From Leslie Soden’s future fourth-floor apartment in the former Poehler Grocery Warehouse building in east Lawrence, you can see quite a bit.

Tony Krsnich will host a neighborhood party from 2 p.m. to 8 p.m. May 5 at the corner of Eighth and Pennsylvania streets. The party will include music from live bands, refreshments and an opportunity to view progress on the Poehler project.

From a southern exposure, you can catch a glimpse of the red rooftops of Mount Oread. From an eastern window you can watch trains rumble through the valley. And through the leaves you can see the winding path of the Kansas River.

“It is really beautiful up there,” said Soden, who hopes to move into her still-under-construction apartment by July 1.

Others are excited about the view from the ground, too, especially as momentum builds to turn at least two other old industrial buildings near Eighth and Pennsylvania streets into projects to attract artists to the area.

“I’ve always had a vision of Lawrence becoming the Santa Fe of the Midwest,” said George Paley, a longtime Lawrence developer who was referring to the southwestern arts scene of Santa Fe, N.M. “It is a big dream, but I think this area is going to get us a lot closer to it.”

Tony Krsnich, the Kansas City-area developer who is leading the project to convert the 1904 Poehler warehouse building into 49 apartments, said the project is going exceedingly well. Work started in January, and already the project is 70 percent complete.

Or, at least, the portion of the project he had planned.

Now the east Lawrence development is starting to delve into realms that he didn’t envision when he purchased the long-vacant building last year. Krsnich has begun work on the adjacent Cider Vinegar Building to convert it into a ground floor art gallery with an outdoor reception space, while small offices will occupy the second floor.

Next door, Paley is leading a group that includes several faculty members from Kansas University who hope to create a center for artists, scientists and technology innovators to collaborate on projects. Paley and his group have preliminarily secured an approximately 20,000-square-foot former T-shirt warehouse that is just south of Eighth and Pennsylvania streets. Plans are in the works to fill the building with studio space for artists and innovators.

Paley is convinced the studio space, when coupled with the new Poehler apartments — most of which are rent-controlled because of the use of state tax credits — will attract artists and innovators from wide and far to locate in Lawrence.

Krsnich, who said he didn’t have any plans for an art theme when he purchased the building, said he is now all-in on the concept. He said he currently is working to secure about two acres of vacant property on the west side of Eighth and Pennsylvania streets to create an outdoor sculpture park and place for small outdoor concerts or arts events.

“It really has happened by accident, but now I’ll be surprised if this area doesn’t become known as Lawrence’s arts district,” Krsnich said. “We’ve seen how that has worked out in Kansas City and elsewhere, but I think we have more potential here.”

Krsnich said he plans to have all 49 apartments in the building ready for occupancy by July 1.

Already, the project is attracting attention from potential renters. Krsnich estimates he has given about 40 tours.

“Normally you don’t get that type of activity until a couple of weeks before you’re ready to open,” said Krsnich, who led the project to convert the long-vacant Chatham Hotel in Kansas City into apartments.

Krsnich said the apartments, 38 one-bedrooms and 16 two-bedrooms, will be done in a “classic loft style.” That means granite counter tops, stained and sealed concrete floors, and exposed ceilings that show off the brick building’s massive wooden beams.

Rents, though, won’t be typical of trendy loft developments. Krsnich’s group received state tax credits through the Kansas Housing Resources Corp., which obligates the development to offer 43 of the 49 apartments at below market rate rents for the next 30 years.

Rents are still being finalized, but Krsnich said one-bedroom units, which average in size about 750 square feet, will rent for around $550 per month. Two-bedroom units, which average about 1,100 square feet, will rent for about $650 per month. Residents, per regulations of the state program, will have to meet income guidelines to qualify for the rent-controlled apartments.

Krsnich said the development also will include a large courtyard area for residents, complete with a community barbecue area and a putting green. The roof of the building also is covered with solar panels that will produce up to 57 kilowatts of electricity.

Soden, who lived in a similar type of development in San Francisco, said she is counting the days until she moves in.

“I really do love old houses, but this is a chance to really live in an important piece of Lawrence’s historic infrastructure,” she said. “And what is great is that even though it is being redone, it is still very east Lawrence.”

Construction crews already are replacing the roof of the former Cider Vinegar Building, which is a stone factory building just west of the Poehler building. Krsnich estimates the art gallery space will be able to accommodate events of up to 300 people, and the outdoor plaza area can host about the same.

Krsnich, who received about $1.3 million in assistance from the city for infrastructure improvements, said he will ask the city to make improvements to Pennsylvania Street. He said he is still working to put together more detailed numbers before he makes his official request to the city.

Work has not yet begun on the adjacent T-shirt warehouse building. But Paley said renovation work on that building will be less extensive.

“We’re going to open it up and let things go where they will,” Paley said. “I think once artists start locating there, people will want to come down and see what’s going on.”

Paley and other members of his group, which includes local arts organizer Eric Kirkendall and some members of various departments at KU, had applied for grant money to start a similar center in a building Paley owns along 23rd Street.

But Paley said the momentum of what is happening in east Lawrence caused the group to look here, and also to decide to move forward before receiving any grants.

“I just feel like there is so much going on here that we have to,” Paley said.

Krsnich said he’s also excited about the momentum under way, if not somewhat surprised that it has all come together so well.

“This entire area, you can just feel that is on the edge of popping,” Krsnich said. “When we found this area, I was just so surprised it even existed. This is a half-mile from Mass. Street. For years people have been building miles away to the west and bypassing this area. I’m just glad we found it.”