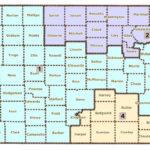 A proposed congressional redistricting plan put together by state Rep. Clay Aurand, R-Belleville, who is vice chairman of the House Redistricting Committee, would place Lawrence in the 1st U.S. House district. The Legislature again will take up the matter of redistricting when the wrapup session starts April 25.

Both of those plans seem to have been defeated.

What to try next?

Lawrence, the most liberal city in Kansas, is already split between the 2nd and 3rd congressional districts, but Democrats believe there may be a move to place Lawrence in the vast 1st District, one of the most conservative districts in the country.

He said the goal of House Republican leaders has been to place Democratic areas of Topeka, Kansas City, Kan., and Lawrence in separate congressional districts in order to dilute Democratic voting strength.

Hensley said the latest version reflecting this strategy is a congressional redistricting map called “Deep Purple” that was put together by state Rep. Clay Aurand, R-Belleville and vice chairman of the House Redistricting Committee.

Deep Purple would make Lawrence the easternmost point of the 1st District, which includes all of western and much of central Kansas and is represented by U.S. Rep. Tim Huelskamp, a Republican from Fowler. The eastern part of Douglas County, including Eudora and Baldwin City, would be in the 2nd District, which is represented by U.S. Rep. Lynn Jenkins, a Republican from Topeka.

Aurand said Hensley is overstating the potential of Deep Purple to get votes in the Legislature, although he defended the proposal.

“You have to get the people from somewhere,” said Aurand, noting that the 1st District needs about 58,000 more people to be equal in population to the state’s other three congressional districts. The Deep Purple map would give each district approximately 713,280 people.

Aurand said his plan would keep Kansas University and Kansas State University in the same district because it also would split Manhattan. K-State would be in the 1st while the site of a proposed federal biosecurity lab near the campus, the National Bio and Agro-Defense Facility, would be in the 2nd. Republicans have said that Jenkins is better placed in Congress to ensure that NBAF gets funding.

In addition, Aurand said Emporia State and Fort Hays State universities would also be in the reconfigured 1st, as would Kansas’ two major military installations, Fort Riley and Fort Leavenworth.

Aurand said that no proposed congressional redistricting map is perfect but that perhaps his is less onerous than the other ones.

Hensley said he believes a compromise plan is emerging that will be considered when legislators return for the wrap-up session that starts April 25.

That compromise, he said, would keep both K-State and NBAF in the 2nd, as Jenkins wants, while also providing the needed population in the 1st by moving several more rural counties from the 2nd to the 1st and moving the Wichita-based 4th farther into eastern Kansas. He said it is important to keep communities of interest together in the same districts.

“What does Lawrence have in common with the 1st District?” Hensley asked. “Very little.”