Topeka ? As state officials Wednesday considered licensing regulations of abortion clinics, about 30 people rallied outside the Statehouse to try to stem the tide of anti-abortion legislation coming out of Gov. Sam Brownback’s administration. 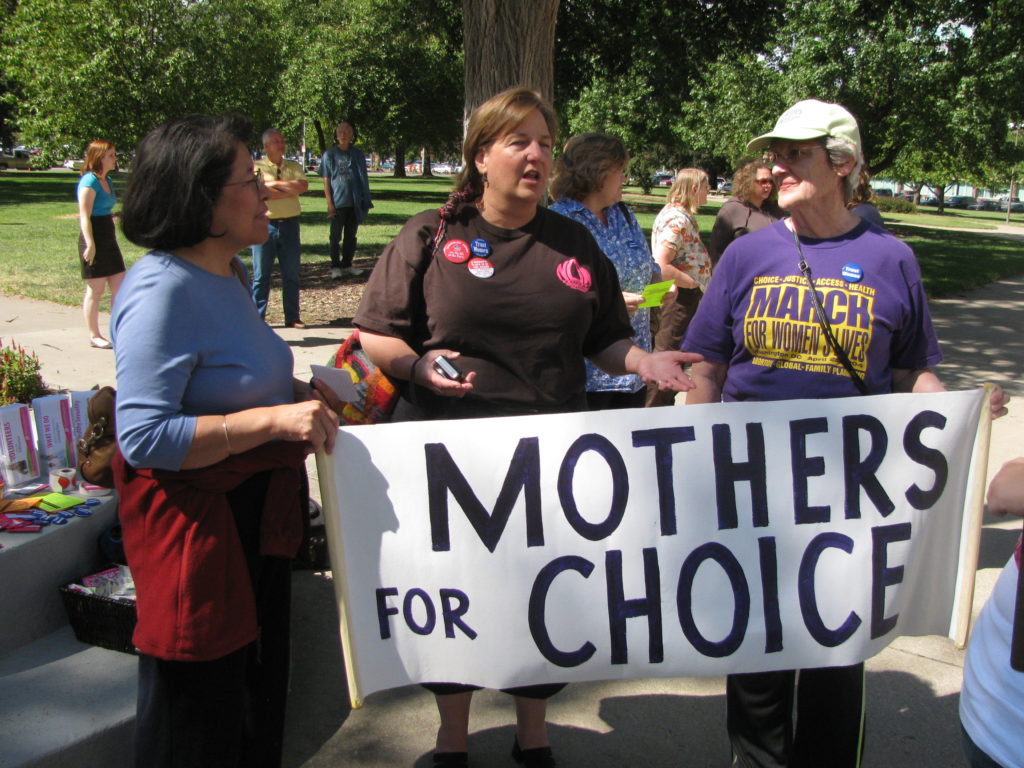 Women attending a rally Wednesday outside the Capitol hold a pro-choice sign. From left to right they are Carol Ramirez of Topeka, Melissa Carlson of Overland Park and Marilynn Ault of Topeka.

“We’re defending against a legislative and cultural attack on our lives, futures and even our bodies,” said Kaspian Zero, a single mother from Kansas City.

Diane Wahto of Wichita said women must have the choice to decide their fate. “It is immoral and unjust to force a woman to give birth to a child she can’t take care of,” she said.

The rally was put together by Speak for Choice, a group formed by several Kansas University students.

One of the founders, Leslie Goodwin, said the group is trying to raise awareness about anti-abortion laws that have recently been enacted with an eye toward getting more pro-choice people elected.

“We need new people in office,” she said.

Meanwhile, the Kansas Department of Health and Environment held a public hearing on proposed regulations to license abortion clinics.

An abortion clinic regulation bill, which was passed by the Legislature and signed into law by Brownback, was supposed to take effect July 1. But a federal judge blocked the rules until he decides a lawsuit brought by abortion clinics.

But Drs. Herbert Hodes and Traci Nauser, a father-daughter team of obstetrician-gynecologists from Overland Park, who provide abortions and sued the state over the regulations gave detailed testimony in opposition.

They argued the regulations would impose “medically unnecessary requirements that far exceed the prevailing medical standards of care.”

The regulations, they said, would shut down their business and be “particularly harmful to women who are suffering from medical complications during pregnancy or have received a diagnosis of serious fetal anomaly.”

For example, one of the regulations would require facilities that provide abortions to have procedure rooms of at least 150 square feet, excluding cabinet areas. “A procedure room of this size for the performance of abortions is neither medically necessary, nor required by the applicable standards of care. Indeed, even hospitals and ASCs (ambulatory surgical centers) in Kansas, which provide far more invasive and complex procedures, are not mandated to have procedure rooms this size,” the doctors argued.

Another regulation would require a 50-square foot janitorial and storage space for each procedure room. Again the doctors said this was unnecessary “evidenced by the fact that the other regulated medical facilities in Kansas are not required to meet such a specification.”

Two other bills signed into law by Brownback are the subject of court challenges. In one, a federal district judge blocked a state budget provision and ordered the state to pay Planned Parenthood federal family planning funds.

While the funds are for non-abortion services, the budget provision was pushed by anti-abortion legislators who say any tax funding of Planned Parenthood is wrong because the organization does do abortions.

And in another lawsuit, the American Civil Liberties Union sued to block law that will prohibit private insurance policies from covering abortion costs, unless the procedure is needed to save the life of the woman.

Brownback has said the laws represented “the will of the Legislature and the people of the state of Kansas.”