The Painted Donkey: Art auction and story collection meant to send a message from art lovers to Topeka 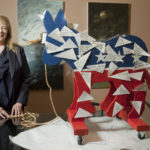 Margie Wakefield has created a red, white and blue painted donkey to publicize The Painted Donkey: An Art Auction Event, Sept. 8 at the Carnegie Building, 9th and Vermont. Artists have donated work to the auction to raise funds for the Douglas County Democratic Party in support of government-funded art programs.

Never has playing pin the tale on the donkey been such a painful game.

Organizers of The Painted Donkey: An Art Auction Event are asking art lovers to write “tales” of why they think the arts are important on triangle-shaped “tails” to be pinned on a cute plywood donkey.

Those tails — either the originals or the copied “tales” — will be sent to Gov. Sam Brownback in protest to the governor’s move earlier this year to defund the Kansas Arts Commission, making Kansas the only state without a government-supported arts entity.

Painted Donkey organizers started collecting tails/tales at the year anniversary of Final Fridays — Aug. 26 — and plan to keep collecting through the auction, which is 7 p.m. Thursday at the Carnegie Building. Tickets are $15. The double-blind auction, featuring more than three dozen local artists, will raise money for the Douglas County Democratic Party, says event founder Margie Wakefield. She says that, all wrapped together, the donkey, the tales and the auction are meant to be a statement to Brownback and legislators — both Republican and Democratic — about why the arts are crucial.

“This was initially born out of the idea of a reminder that we do think that art is an integral part of our community and our culture and that it’s extremely important to support it,” Wakefield says. “And so, obviously, the artists were very excited about that idea. We just have a great group of artists that are donating a piece.”

Artist Molly Murphy, who is both donating art and helping Wakefield put on the auction, says she’s been encouraged, inspired and impressed with the tales that have been pinned onto the donkey and shared by the community. She hopes the governor will be, too.

“They asked initially, ‘Why do you think the government should support the arts?'” Murphy says. “And our favorite response in the group was, ‘So that artists don’t have to become politicians.'”

The governor’s public relations representative has yet to comment.