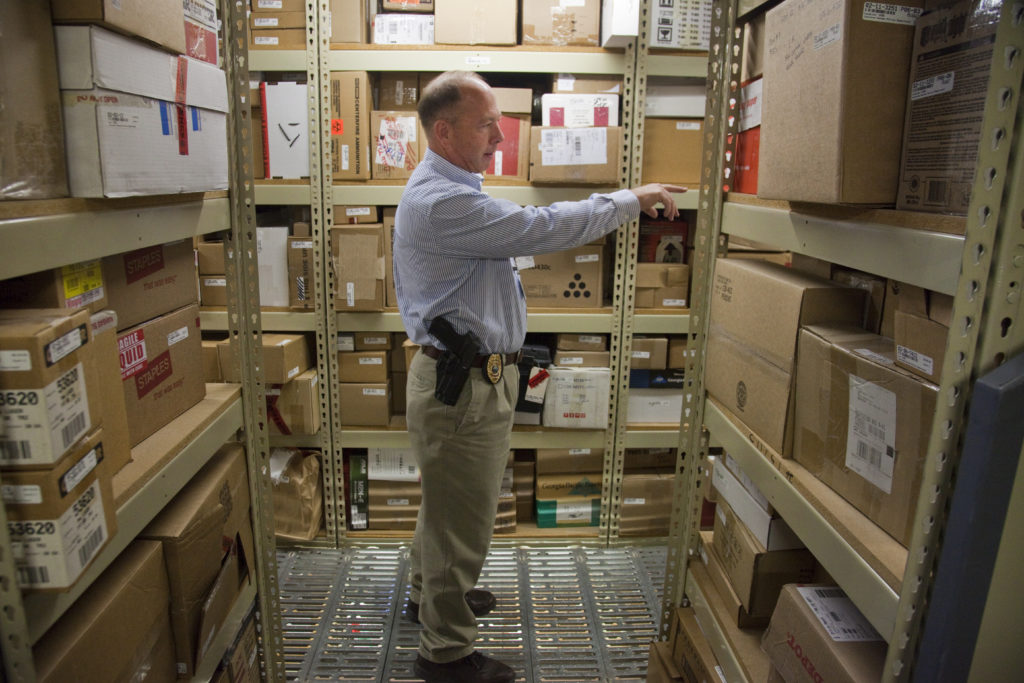 Officer Keith Jones checks the third level of the evidence room at the Judicial and Law Enforcement Center, 111 E. 11th St. Crime evidence is housed in various locations and space is getting tight. 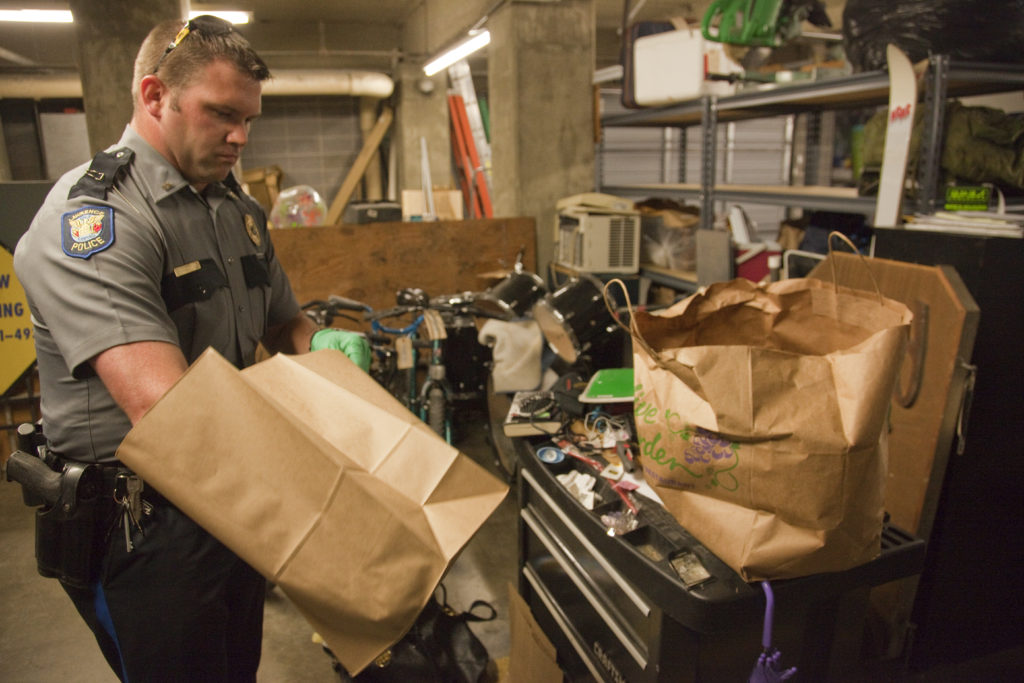 Officer Michael Ramsey processes items that were found in a stolen car. He had to use a roller storage cabinet for a work surface in the garage under the Judicial and Law Enforcement Center. 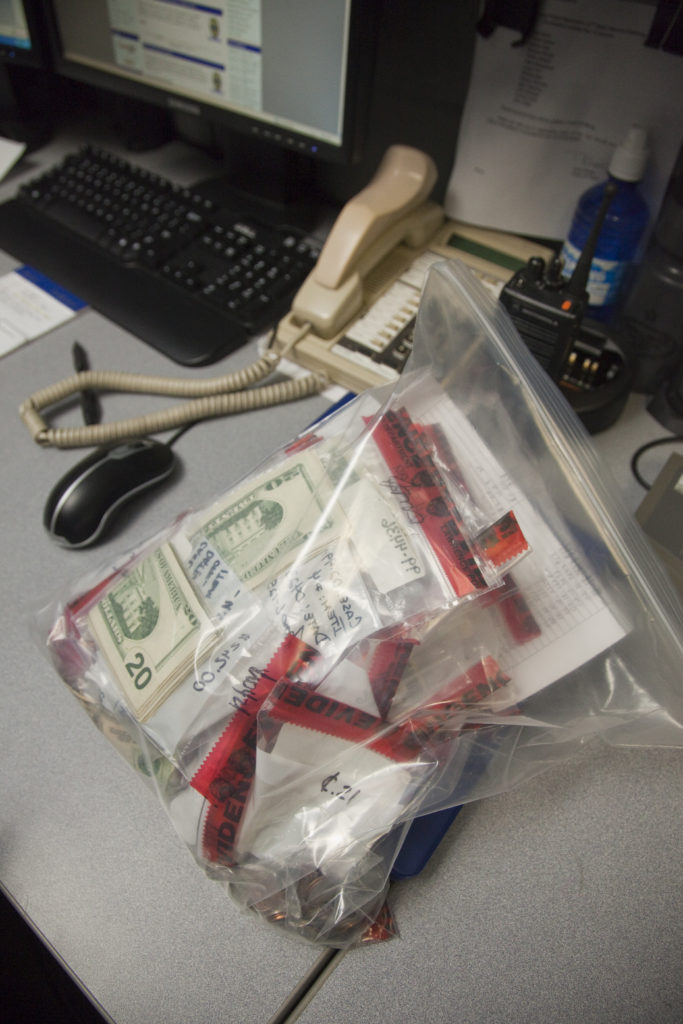 A ziplock bag holds smaller bags of cash that is waiting to be counted in the evidence room.

He jokes that his two evidence officers and civilian employee, who oversee thousands of pieces of evidence for the police and the Douglas County Sheriff’s Office, could work for shipping giant UPS.

The room is in the former gym from when that part of the building was a jail, and it now includes a steel staircase for two makeshift floors inside. It’s more room for evidence officers Keith Jones and Doug Payne to find a place for new evidence, like possible stolen items that were recovered or even drugs, guns and money.

But there’s not much space left, and the police department has evidence stored in more than one place, including at the city-owned former Morton’s Building Materials Inc. building, 900 E. 15th St., where items like vehicles are contaminated with mold because the building leaks and has other problems.

Khatib has used the space restrictions for evidence storage as one example in urging city leaders to explore building a new law enforcement facility to house the entire department.

“We, as a law enforcement agency, have not really had a purposefully designed facility for just police, as long as I can remember,” said the 20-year department veteran.

Currently the city’s police department is largely split between the patrol division downtown at the law enforcement center, which also houses Douglas County District Court and the sheriff’s administration, and the Lawrence police detectives and administration in west Lawrence at the Investigations and Training Center, 4820 Bob Billings Parkway.

City commissioners on Tuesday will consider a proposed time line for assessing the police department’s buildings.

The proposal has the commission approving a possible architectural firm by late December, which could report back to commissioners in February. Commissioners did include $30,000 in their 2012 budget for the study.

Khatib said the outside firm could check for efficiencies in how the department currently uses its facilities, and commissioners could compare that with recommendations he has made, including for a building designed as a police department that could help protect more police vehicles, have better interview rooms and allow for the department to be housed in one building to facilitate better communication between patrol officers and detectives, for example.

He said the city around 2000 purchased the west Lawrence building, which was currently constructed as an office building, and that half of it is not habitable for the department without extensive renovation.

“A law enforcement facility sometimes is not perceived as glamorous and important and maybe as culturally significant as some of the other projects the city does,” Khatib said. “But there is a real need for a police department facility.”

Finding space for the 120,000 items collected in evidence is one major challenge the department has, Khatib said. It can be anything from a crushed can from a minor-in-possession case to a weapon in an alleged homicide to a vehicle bumper in a fatality accident.

“The proper handling of evidence and the proper preservation of evidence is a critical component of case preparation and prosecution and finding the truth in cases,” Khatib said.

He said his officers do their best despite the obstacle the tight space presents.

Often the evidence collected must stay there because court cases can take months or even years before they’re resolved. And even then, they’re required to preserve certain things later in case of an appeal. Jones, the evidence officer, pointed on Friday to a box of items the department had finally received legal permission to get rid of. They were from an auto burglary case from 1998.

Jones works to train officers, especially the new recruits, about how to package items to take up as little space as possible, especially when they are in paper bags.

“Do not package air,” Jones told the department’s 13 recruits in a recent presentation. “We’ve got plenty of it back there, and we really don’t need any more.”

He also implored the recruits to be cautious when they recover firearms, especially to make sure they are no longer loaded. If they can’t get the ammunition out, they must notify a supervisor and Jones himself before they submit the gun in an evidence locker.

“We need to know about it,” Jones said. “What I don’t want to have is one of us come to work and find a loaded weapon and it accidentally goes off.”

He also warned the recruits to be extra careful when they submit drugs, guns and money as evidence. Cases involving those items are most likely to be hotly contested in court, he said, and bring extra scrutiny on the department.

“You can see where your integrity as a police officer is very, very important,” Jones said. “You have to take that extra step and make sure that it’s done right, so that something doesn’t come back on you and could bite you.”