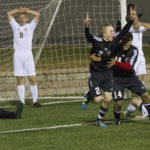 First, there was mayhem.

Lawrence High sophomore Connor Henrichs had just scored the game-winning goal in the 95th minute of a double-overtime, 1-0 victory against Free State High.

LHS was going to state.

The team engulfed its hero in celebration. The Lion faithful flooded the Free State soccer field, converging on the players with Henrichs as the epicenter of merriment. The moment was so surreal that it was hard for him to string his emotions into full sentences.

But there are two sides to every story. The Firebirds played just as hard, for just as long. They were on a completely even playing field with their opponent for 95 minutes, but as equal as they were on the field, LHS’s and FSHS’s emotions could not have been more opposite. All you had to do was look past the midfield where the Firebirds were busy drying eyes.

“We really battled in this game,” FSHS coach Kelly Barah said. “I think that was the toughest piece for them to swallow.”

The Lions and Firebirds have played each other for almost 200 minutes in their two meetings this year, and the first goal scored was the one that mattered the most. FSHS (9-7-2) had a good season, and Barah won’t forget that.

“It’s always about family and things like that with us,” he said. “So as sad as the result is, we still pride ourselves in what we’re trying to build here.”

After the Firebirds did their usual postgame ritual focusing on “ubuntu,” which stands for “I am who I am because of who we all are,” everyone involved with the team embraced and comforted each other.

FSHS senior Hunter Peirce said the last four years have helped him grow into a man. As a Firebird, he said, he has learned to be close to everyone from the ball boys to the parents in the stand. That lasts longer than any loss on the soccer field.

“This is the next start of my life,” Peirce said. “It’ll go on from here.”

On the other side of the field where the Lions were celebrating, the players reminded coach Mike Murphy about his promise to shave his hair. Some misheard him and thought that he said that he would do it Wednesday. He actually said he would do it after they “win state.” It wasn’t the time for getting complacent just yet.

“Regional championship is nice,” Murphy said, “but there’s more to do.”

LHS (8-7-3) had to use everything it had to win the marathon match.

As is the new tradition of Lion and Firebird soccer, the game was close throughout, not just on the scoreboard. The Lions were the aggressors for more of the first half, but nothing was going in. The game was still anyone’s for the taking.

The contest had one considerable momentum swing. Just before the break, FSHS senior Jake Walter was dribbling toward LHS senior goalie Tanner Click. Click made a quick dive on the ball and snagged it, but in doing so, injured Walter’s ankle. Walter didn’t return to the game.

Losing a guy who scores 20 goals in a season is rough, but Barah said it didn’t affect the outcome of the game.

“This team has never been about one person,” he said.

In the end, the stats or the yellow-cards weren’t the important factor from this game. Somewhere in the postgame celebration, Peirce found time to swap jerseys with LHS’s Johannes Reiber. He was sporting a jersey from a rival team that just beat him, which he never took off.

Lastly, there was respect.

“My best friend is on that team,” Peirce said of Reiber. “I couldn’t ask for it any other way.”