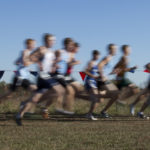 A blur of color shoots across the horizon as varsity boys runners take off at the start at the Sunflower League cross country meet Saturday, Oct. 15, at Rim Rock Farm.

Before most of the girls coming down the Rim Rock Farm skyline for the finishing stretch became visible, Shawnee Mission West’s Allie Cash breezed to the finish line to win the girls 4K at the Sunflower League cross country championships.

“It gives me a good rabbit to chase,” Robinson said. “When I see her, I know I’m running well.”

Cash has jumped to fast starts all season and usually creates distance early on. But there was a point in the middle of the race where the top runners were all bunched together. Robinson had a chance to take off with her, but decided to stick with the pack.

“I was still within eyesight of her,” Robinson said. “I almost thought about going out and running with her.”

In hindsight, she was glad she didn’t, or Robinson would have faded sooner, she said. She still finished what coach Steve Heffernan said was the best race of her high school career.

Overall, the FSHS girls finished fourth out of 12, with big contributions from Molly McCord, who finished 13th, and Rosemary Newsome, who finished 22nd.

Free State senior Kain Anderson finished second in the boy’s 5K with a 16:11, but dealt with an almost identical issue as Robinson with a runner from the same school.

SM West’s Jonah Heng won the race, but Anderson was seven seconds behind. Anderson said the difference was in their different styles of racing.

“We go out at the same pace, but somewhere in the middle of the race he just gets stronger,” he said. “I just stay too relaxed.”

Lawrence High’s Gavin Fischer had to earn his 10th-place finish when teammate Nathan Stringer came up from behind to push him on the final sprint. Fischer beat him by a tenth of a second, and Zach Andregg was two seconds behind in 12th place.

The 10-11-12 finish showed how effective the Lions can be when they race as a team.

“Today, Zach and I just tried to stay with him as long as we could,” said Stringer, who set a personal best by 20 seconds.

After a third-place team finish at league, the Lions were pleased to see their strategy of sticking with the top runners work. When LHS ran at Rim Rock last month, Fischer ran about the same time as he did this week, but he was the top runner by 30 seconds.

Coach Brian Anderson said his team fared better because it wasn’t distracted by homecoming and other school-related events.

“This time we got more focused on the race,” Anderson said.

Grace Morgan didn’t set a PR, but she did shave about 35 seconds off of her last race at Rim Rock. She placed 14th overall to lead the girls to an eighth-place team finish.

Morgan said most of the team was trying different strategies to prepare for regionals. Her race was more about slowing down than speeding up.

“I didn’t all-out sprint in the beginning,” Morgan said. “I just tried to go faster throughout the race. I think it worked.”