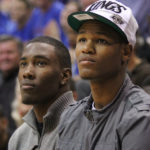 Kansas freshmen Jamari Traylor, left, and Ben McLemore watch the Late Night in the Phog festivities from the bench on Friday, Oct. 14, 2011 at Allen Fieldhouse.

As partial qualifiers, McLemore, a 6-foot-5 guard from St. Louis, and Traylor, a 6-8 forward from Chicago, will be able to practice second semester and be eligible to play in games at KU next season.

Until second semester, they will be unable to take part in any team activities, thus were not allowed to participate in Friday night’s Late Night in the Phog activities.

“The NCAA has legitimate reasons why the ruling is what it is. We don’t agree with the ruling, but we are not saying we are right and they are wrong. We agree to disagree,” Self said. “They’ve been good and responsive and up front in telling us the situation for the most part.

“We’re not happy with it at all. I’m not. I don’t think it’s right. When we recruited these kids, we thought they were full qualifiers without question. … These are really good young men. We feel they’ve proven themselves to be full qualified status. They (NCAA officials) see different. So we fought. We fought hard. We didn’t win.”

Self told the two players of the final ruling Friday after he learned they could not participate at Late Night.

“We’ve known. I just haven’t shared it for a couple of weeks because we were still holding out hope — appeal, another appeal, then another appeal. It just didn’t work out,” said Self.

Self said it’s “sad” the two couldn’t participate in Late Night. They did attend.

“I don’t see what that would hurt them being a part of this,” Self said.

In September, KU lost freshman power forward Braeden Anderson, who was ruled ineligible to be on scholarship at KU this school year.

The NCAA deemed the 6-foot-8 Okotoks, Alberta, Canada native a partial qualifier, which would make him eligible for financial aid and possibly earn the right to practice second semester but not play in games. However, because of Big 12 Conference policy, all partial qualifiers must be approved by the league’s faculty athletic representatives. Anderson’s case was not approved for aid and not allowed to attend KU.

Traylor and McLemore were approved for aid by the faculty reps.

KU has just eight recruited scholarship players after the loss of the two.

“There’s a lot of people out there who would love to have Thomas Robinson and Tyshawn Taylor as their anchor and point. I’m not going to say poor, pitiful us,” Self said. “Our depth situation will not be the same. You are looking at a guy inside (Traylor) that had a chance to start and play a ton. You are looking at a guy on the perimeter that may be as good an athlete as we’ve recruited on the perimeter (McLemore), at least since Brandon (Rush).

“The way I look at it is, we signed a heck of a recruiting class for next year because you include these guys in next year’s class with guys we hopefully sign this year, it could be a heck of a class.