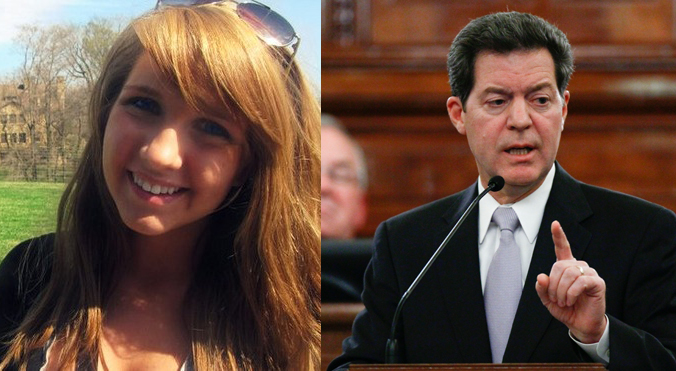 Topeka ? Facing ridicule on a national level, Gov. Sam Brownback on Monday issued an apology, saying his staff overreacted to a disparaging tweet about him written by a high school student.

That led to a trip to the principal’s office for Sullivan, who was scolded and told to write letters of apology.

What followed was a national fire storm, much of it critical of Brownback and the principal, Karl Krawitz. Brownback was accused of trying to intimidate a youngster, abridge freedom of speech, wasting taxpayer dollars by monitoring what was written about him and being paranoid.

“My staff overreacted to this tweet, and for that I apologize. Freedom of speech is among our most treasured freedoms,” Brownback said.

The incident began last week when Sullivan was among a group of students at the Statehouse for a Youth in Government program.

Brownback, a Republican, was addressing the group. Sullivan, who describes herself as a Democrat and who recently registered to vote, tweeted from her cellphone, “Just made mean comments at gov. brownback and told him he sucked, in person #heblowsalot.”

Shawnee Mission East senior Emma Sullivan, 18, tweeted on Sunday that she did not intend to apologize. On Monday, Gov. Brownback apologized for overreacting.

She actually did not say that, and later said she was “just joking with friends.”

When the governor’s office saw the tweet during monitoring of social media comments, it was reported to Youth in Government officials.

Brownback’s spokeswoman, Sherriene Jones-Sontag, said at the time, “It was important for the organization to be aware of the comments their students were making. It’s also important for students to recognize the power of social media, how lasting it is. It is on the Internet.”

She added of Sullivan’s tweet, “That wasn’t respectful. In order to really have a constructive dialogue, there has to be mutual respect.”

Sullivan said she landed in the principal’s office for nearly an hour and was told she had embarrassed her school and district. Principal Krawitz told her to write a letter of apology. At first Sullivan said that she would but that she wasn’t sorry. Then she refused to apologize, and the Shawnee Mission school district earlier Monday issued a statement saying she didn’t have to.

“The district acknowledges a student’s right to freedom of speech and expression is constitutionally protected,” the district’s statement said, adding, “The issue has resulted in many teachable moments concerning the use of social media.”

On Monday, it was Brownback who was apologizing.

In his statement, Brownback said, “I enjoyed speaking to the more than 100 students who participated in the Youth in Government Program at the Kansas Capitol. They are our future.

“I also want to thank the thousands of Kansas educators who remind us daily of our liberties, as well as the values of civility and decorum. Again, I apologize for our over-reaction.”

The “overreaction” certainly added to Sullivan’s popularity. Before the incident, she had about 65 Twitter followers. By mid-afternoon Monday, she had more 10,000, or more than three times as many as Brownback.

For Brownback, it was the second time in less than three weeks he has suffered an embarrassing incident.

On Nov. 7, Brownback held a news conference to introduce Jim Mann as his new chief information technology officer. The next day, Mann resigned under pressure after it was discovered he had listed on his resume a degree he received from a diploma mill. Brownback had conceded his staff did not look into Mann’s educational background.