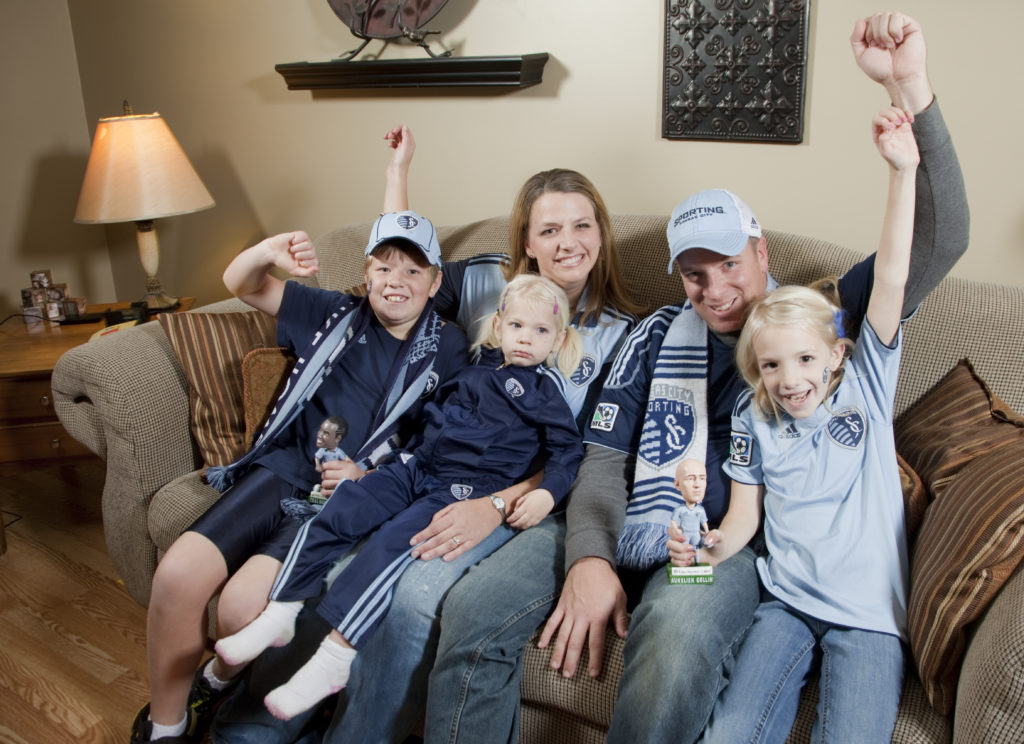 The Urban family are big fans of Sporting Kansas City, a Major League Soccer team. Julie and her husband Brandon cheer at home with their children, from left, Ben 10; Molly, 2; and Grace, 8. 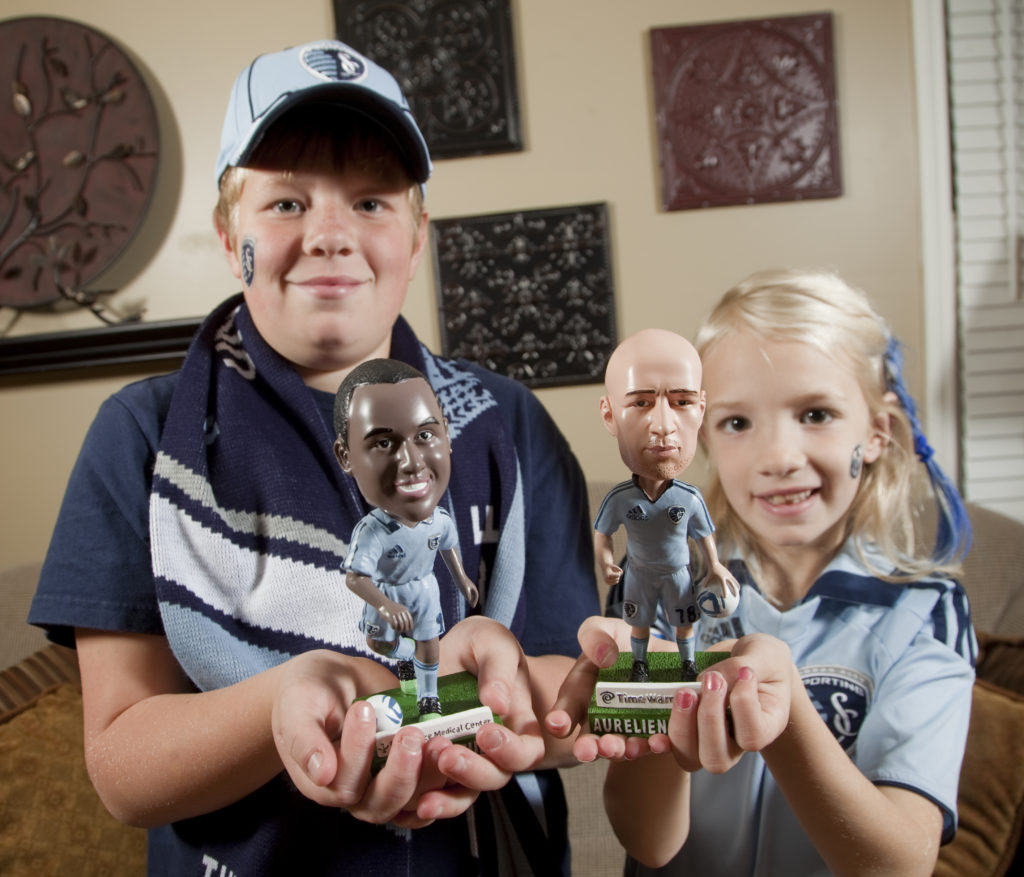 Ben Urban, 10, and his sister Grace, 8, along with their parents, are big fans of Sporting KC soccer team. The two hold bobble-head dolls of two of their favorite KC players.

Julie Urban doesn’t care much for sports. The highlights of her childhood soccer career include trying to play goalie while holding an umbrella and picking a lot dandelions.

So when her husband, Brandon Urban, decided on a whim this year to buy season tickets for Kansas City’s Major League Soccer team, Sporting Kansas City, he figured he would be taking friends, not his wife, to the watch the games at the newly constructed Livestrong Sporting Park. Brandon was in for a surprise.

“I went to the first game, and I was hooked,” Julie said. “I was out of my chair, up and down watching corner kicks, telling the popcorn man to sit down. Brandon had to tell me to be quiet.”

Since her first game at Livestrong Sporting Park, Julie, a Lawrence resident and speech pathologist for the Shawnee Heights school district, has transformed into a whole-heartedly devoted Sporting KC fan, attending every home game she could. She and Brandon even replaced their premium movie channels with FOX Soccer so that they could watch the team’s away games with their friends and three children at home.

Brandon, who has always been a sports fan, but only recently starting follow soccer, is good-natured about his wife’s recent enthusiasm for Sporting, and about the fact that he hasn’t taken as many friends to games as he had planned.

“It so funny because she hates sports,” said Brandon, a sales representative for Thomas and Betts. “I can’t even get her to watch KU basketball.”

Josh Whisenhunt, a member of Sporting Kansas City’s communications team, said that the team’s recent spike in popularity is due in large part to the new $200 million Livestrong Sporting Park at Village West in Kansas City, Kan. Whisenhunt said the stadium provides a first-class soccer viewing experience that was not available when the team was playing at Arrowhead and Kauffman Stadiums.

“At a very basic level, the team is now playing in a field that’s the correct shape for soccer,” said Whisenhunt. “The seats are as close to the field as humanly possible, and this lets people get an idea of what truly amazing athletes the players are.”

Whisenhunt said that the Sporting KC club has also made a conscious effort to embrace new media and social media, helping fans to feel more connected to the team. The Livestrong Sporting Park is nationally known for its high-tech features, including high-density wireless technology and ultra-high-speed broadband networks that enable fans in the stadium to use smart phones simultaneously without the risk of slow or timed-out connections.

Julie and Brandon agreed that the state-of-the-art Livestrong Sporting Park has played a part in cultivating their devotion to the team. However, the accessibility of the Sporting team players is what has cemented their loyalty. A strong presence of many of Sporting’s players on Twitter is one example of their accessibility.

“Twitter is how we get to know our players,” Julie said. “Kei Kamara tweets several times a day — I think his dog may even have an account. Jimmy Nielsen tweets about his family, where they go to eat, how proud he is of his daughters. The most hilarious one I think is Eric Kronberg. He tweets random thoughts.”

Sporting players also socialize regularly with fans after home games in the stadium’s “Members Club,” which is open to all ticket holders. Brandon and Julie have personally met eight Sporting team players, something that they say does not happen in other professional sports.

“It’s like when my dad was going to see the Royals in the late ’70s and early ’80s,” Brandon said. “You used to be able to go across the street to the Adams Mark Hotel after games, go up to the top floor, and there would be Willie Wilson and George Brett buying drinks for people. Now that’s changed. The players became millionaires and don’t do that anymore.”

The Urbans said that Sporting’s win against the Colorado Rapids at the MLS Eastern Conference semifinals game Oct. 30 in Denver was an epic event of the season for them. Julie and Brandon drove to Denver and back within a 24-hour period to attend the match.

“We left at 7:30 a.m. on Sunday morning, and we were back at 5 a.m. on Monday,” Julie said. “We were celebrating Halloween at work on that Monday, and I just went as a crazy Sporting fan. People were saying I was a zombie Sporting fan because I looked so tired.”

At a pep rally in Kansas City following Sporting’s Eastern Conference win in Denver, Sporting player Graham Zusi shook hands with the Urban family, and Julie mentioned to him that she and Brandon had driven to Denver for the game.

“He was actually surprised and almost humbled that we drove there and back in one day to see them play,” Julie said. “He asked about the trip and then took the time to take pictures with the children. They really make it more about the fans than themselves.”

The surge of new fans for Sporting KC this season was well-timed. With 13 wins, 9 losses, 12 ties, and a first place finish in the MLS Eastern Conference, the 2011 season was one of Sporting KC’s best ever.

Sporting’s season ended Nov. 6 during an Eastern Conference Final playoff game against Houston Dynamo at Livestrong Sporting Park. Julie and Brandon attended the game with their two older children, Ben, 10, and Grace, 8. The Urbans have already purchased their season tickets for the 2012 season, which starts in March, and have added a seat so that Ben and Grace can attend more games.

In the meantime, Julie said she’ll just have to the follow the team on Twitter to get her Sporting fix.