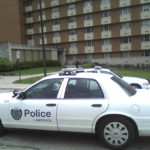 In this 2010 file photo, a Lawrence Police Department patrol car responds to a call at Kansas University's McCollum Hall. There will be more patrol cars on the streets next week as Lawrence participates in the Kansas Thanksgiving Traffic Enforcement Campaign.

• Officers with KU police, the Kansas Department of Revenue’s Alcoholic Beverage Control, Lawrence police and the Douglas County Sheriff’s office cited 32 people in Lawrence Thursday night as part of a patrol that targeted underage drinking. The operation is part of the Fake ID 101 task force.

• According to the New Tradition Coalition of Lawrence, some of the 32 people were cited for more than one charge as officers wrote up 22 violations for minors in possession of alcohol and 18 charges for possession or use of a fake ID, plus one count each of urinating in public and furnishing alcohol to a minor.

An estimated 42.5 million people are expected to travel during the upcoming week for Thanksgiving, and police in Lawrence, Douglas County and across the state plan to beef up traffic patrols.

Lawrence police and Douglas County Sheriff’s officers will participate in the Kansas Thanksgiving Traffic Enforcement Campaign starting as early as Monday, thanks to a grant from the Kansas Department of Transportation.

It will enable more officers to be on roads to enforce traffic laws, including violations for drunken driving, seat belt and child safety restraints and speeding.

“Those driving under the influence of alcohol or other drugs endanger not only themselves but also their passengers, other motorists and pedestrians,” Sarna said.

Lawrence police will operate patrols from Monday through next Sunday, and sheriff’s officers plan four days of special enforcement next week.

“Safe travel on our county roads is our goal, with reductions in property damage and injuries a side benefit,” said Sgt. Steve Lewis, a sheriff’s spokesman.

Police advise people to arrange for a ride home with a sober designated driver and ensure everyone inside their vehicle wears a seat belt.

AAA anticipates highways and airports will be busier than Thanksgiving 2010, with an estimated 4 percent more Americans expected to travel this year. That’s because the economy is somewhat better that there is pent up demand from consumers who had to forego travels plans last year.

“Consumers can expect busy highways and airports as people make their way home during this important time of year,” said Jim Hanni, executive vice president for public and government affairs for AAA in Kansas.