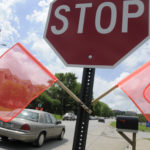 Drivers pass by orange flags attached to two new stop signs near the intersection of 11th and Mississippi streets in this file photo from June. According to city records, stolen signs add up to 0,000 in taxpayer losses each year.

The stealing of traffic signs — almost a rite of passage among today’s teenagers — has cost the city of Lawrence more than $30,000 this year.

And, those costs are something that the city’s traffic engineer David Woosley thinks many vandals don’t consider when eyeing the streets for their latest living room decor.

“It’s not something that comes to mind, that your tax dollars are being spent to install and maintain them,” Woosley said. “And, if you do something to cause a safety hazard, then it’s an incident that can really cost the public.”

So far this year, 230 signs have been stolen (or in Woosley’s words “have disappeared”) within the city limits. And replacing them has cost the city between $30,000 and $35,000. Those numbers are nothing out of the ordinary.

“It’s just one of those things you pretty much have to live with,” Woosley said.

By far, signs with the name of streets are the most common ones stolen. In fact, 84 were reported missing this year. You have until the end of this story to guess which street sign in Lawrence is the most popular one to steal.

The biggest concerns are when stop signs are stolen. So far in 2011, there have been 56 taken, Woosley said.

For drivers on unfamiliar roads, missing stop signs can lead to serious accidents, especially at intersections where drivers on the other road have become used to vehicles stopping. Lawrence Police Sgt. Matt Sarna said when the police are notified of a stolen stop sign at an intersection, they’ll stand by until the public works department replaces it.

“People need to be aware of the dangers that the loss of signs poses and have to think about the consequences if there was a major accident at an intersection that would lead to death or serious injury of innocent civilians,” Sarna stated in an email.

Also on the list of safety concerns are one-way street signs.

“But most one-way streets, if you go down the wrong way, you notice it pretty quick,” Woosley said.

Neither the police department nor Lawrence-Douglas County Fire Medical recall any accidents that have been attributed to stolen traffic signs. But both warn of the potential danger it might cause.

“It is not a joke or a prank to take signs but very serious and definitely a crime,” Sarna noted in an email.

In Lawrence, it’s a misdemeanor crime, but the penalty could be greater depending on the person’s criminal history or the number of signs they have.

The fire department doesn’t often rely on street signs for directions, Fire Chief Mark Bradford said. All the trucks have electronic and print maps inside them, and the drivers are familiar with the neighborhoods within their districts. But they do use the signs as confirmation that they’re headed in the right direction.

“So, if a street sign is gone, it might hamper that,” Bradford said, but noted a far bigger problem is the unreadable numbers on houses.

No parking signs are also popular ones to steal, and 63 have been taken so far this year. Woosley said that’s partially because people believe if they steal the no parking sign, they can’t get ticketed for parking there.

“That’s until we find out about it and put another no parking sign up,” he said.

The actual signs aren’t that expensive to replace. A stop sign costs about $50, and a neighborhood street sign is around $15 (depending on the length). But the cost of the labor and reinstalling the post and anchor make signs more expensive.

“It all adds up pretty quick,” Woosley said.

Out in the county, theft of signs isn’t quite so frequent. Keith Browning, Douglas County public works director, said about 20 signs a year are taken. And, when they do go missing, they are replaced with a sign that is held on by a rivet, making them hard to remove.

The county is also in the process of putting new signs on different sections of roads. As they do, wooden posts are replaced with steel ones, which also make them more theft-proof.

“That wasn’t the purpose of it, but it’s an unintended consequence,” Browning said.

He said river-crossing signs tend to attract the most vandals.

The city also has taken some steps to make it harder to steal some of the more targeted street signs, using vandal-proof hardware that requires a special kind of wrench to get the sign off.

And speaking of popular signs to steal, here’s the fun trivia fact we promised earlier in the story. A looped street that winds through Kansas University’s sorority and fraternity houses and sits just off Emery Drive has been the most popular sign to steal in recent years.