Hartland ? The outline of a once-traveled Main Street is still visible if you know where to look. 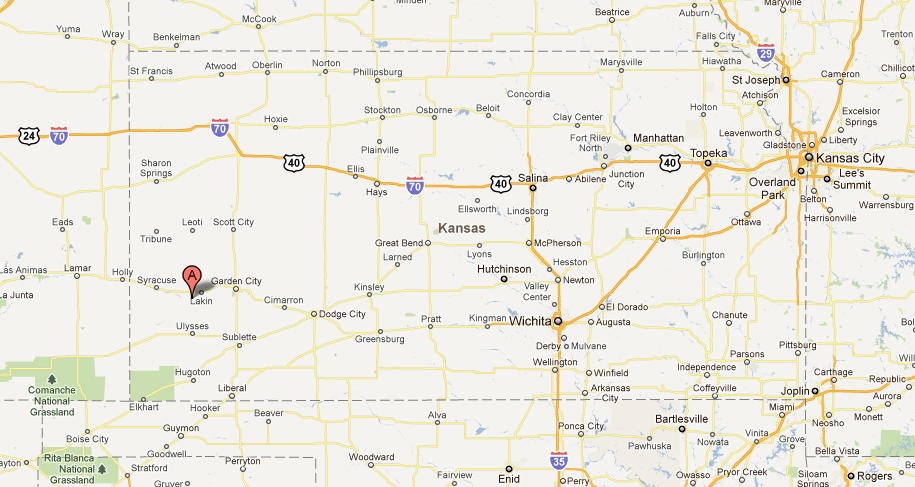 Hartland, population zero, is located in the southwest corner of the state.

It’s one of the few remains of the former county seat of Kearny County — a road overtaken by prairie grass. It now only is trampled by the cattle that graze here.

Harold Smith points out the site of the once prosperous town of Hartland as he parks on the edge of River Road, which follows the dry Arkansas River west of Lakin. He remembers as a child taking the family tractor to the town and buying a dime’s worth of candy bars from the general store — Hartland’s last business before it burned to the ground on April 12, 1957.

Death, however, had been following Hartland long before the store disappeared. When Lakin took the county seat title in 1894 from a town that once had 2,000 residents, Hartland’s ultimate fate was decided.

“It was a downhill trend for Hartland after that,” said Smith, 76, who serves as director of the Kearny County Museum. “Lakin got the county seat. Hartland ended up having nothing.”

Settlement was sparse in these parts in the early 1880s. Traffic had once populated the Santa Fe Trail path that winded toward Colorado, but only a few settlements were established by the time the trail closed in 1880.

Thus was the scene when A.A.G. Stayton brought his family to Kearny County in 1881. The town of Lakin was founded about a decade before, but other than that, settlement was rare, with no doctors, stores or schools.

Then, in 1885, a group of men from Hutchinson picked the site of a new town near where Stayton had homesteaded. They established it on a plot of land next to the Santa Fe Railroad and along the Arkansas River.

These investors began to advertise their location, telling of the beauty and the unbounded opportunities offered in “short grass country,” according to the book “History of Kearny County, Kansas.”

Life soon changed on the once unsettled prairie. Pioneers came and began to build. Mrs. S.E. Madison shipped lumber and hardware to Hartland to build a hotel called the Madison House. Soon a depot sprang up, along with a schoolhouse, general store, dry goods store, restaurant, barbershop, lumberyard, livery and meat market. It didn’t take long for the population to reach 500, and with it came more businesses, including a newspaper and even a roller skating rink.

“The prospects were very encouraging for Hartland to be a large city,” Madison wrote in 1931. “Good businessmen strove for a clean town. Drunkenness was unpopular. A saloon was not needed.”

Kearny County became an organized county in 1888 and Lakin was designated the county seat until an election could be held, according to the history book. Lakin, established in 1873, was the oldest settlement and had railroad facilities. Hartland also had the railroad and the added advantage of being located at the mouth of Bear Creek, with the natural pass through the sand hills that opened the entire southwest to trade.

Then, in February 1889, Hartland won the election and townsfolk began the process of converting a hotel into a courthouse.

The matter, however, didn’t end there. County officers were Lakin men, and they refused to turn over the records. The towns took the issue to the courts, and after considerable fighting the Kansas Supreme Court, in January 1890, ordered the records moved to Hartland.

A town’s survival typically is secured by becoming the county seat. For Hartland, the title was short-lived.

Smith said it is told that Lakin men burned the courthouse in early 1894. Later that year, another county seat election was held, with the votes going to Lakin.

This was the beginning of Hartland’s downward spiral. Some moved their businesses to Lakin. Even the Madison House was taken down and rebuilt in the new county seat as a dwelling. Families soon followed.

“When the county seat was moved to Lakin in 1894, Hartland began to lose most of its families. Every county officer had to move to Lakin, businessmen went where they could make a living, and the town became more or less of a ghost town and is, to this day, a mute reminder of the things that might have been.”

Today, most who travel along River Road would never know a vibrant town once was located here. A stone nearby marks the location of the Santa Fe Trail. The ruts of Main Street are still somewhat viewable. A few foundations can be found in the grass, including steps that once led to the general store, bridge supports along the river, and the foundation of the school.

Dennis Grubbs, who runs cattle on the property, says little else remains.

Grubbs tore down the last house in Hartland five years ago. He used some of the old stockyards to make a corral.

Kearny County farmer Randy Hayzlett, who has land by the site, said his mother used to tell the story of how she went into the general store to buy fuel and the owner, Paul Tromp, lit a match in a dark room to see where open cans of gasoline were stored.

“She turned and ran and he blew up the store,” Hayzlett said.

“To think this town once thrived,” he said. “It was a nice little town. As with any county seat fight, it disappeared.”

The school closed around the year 1945, said Willie Carter, 73, who grew up in Hartland and owns 14 acres of the town site.

There is still a cemetery. Travel northeast a few miles and it emerges amid the short grass. A few graves have been swallowed up by the grass and brush.

Other markers, like the town, weathered away years ago.