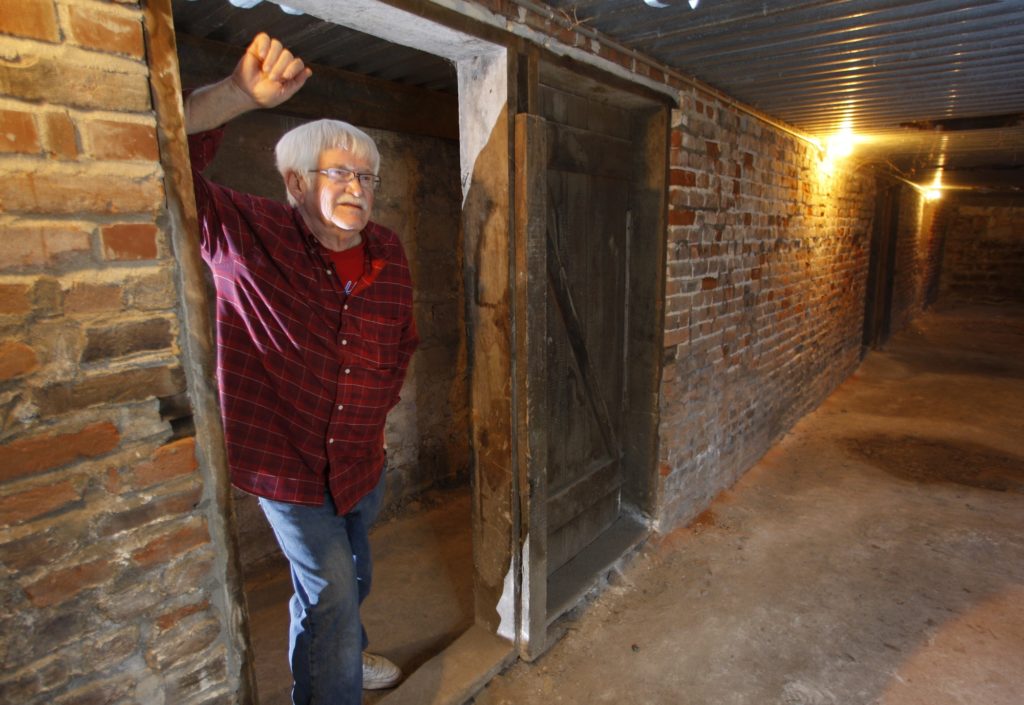 ELLINWOOD ? It is a late-19th-century man cave:

A harness shop, a barber shop and that bathhouse where women known as “soiled doves” entertained road-weary strangers while clothes dried on wooden racks and bath suds dripped through the cracks of wood floors.

It is the dark underbelly of life the Ellinwood tunnels portray.

And, it is one of the quirkier stops in central Kansas.

For more than three decades, these tunnels have allowed visitors to travel in time, back to the days of railroad salesmen and cowboys, proper Victorian standards mixed with the day-to-day grittiness of frontier life.

“The businesses they put down there were for men only,” said Bill Starr, owner of Starr Antiques, Wolf Hotel and the Ellinwood Underground.

“Women did not go to the underground unless they were classified as soiled doves,” Starr said.

More about that later.

More than a century ago, it was a fairly common practice for up-and-coming cities to build underground tunnels and shops.

“In Chicago, in the late 19th century, they built this system of tunnels underneath the downtown,” said Pauline Saliga, director of the Society of Architectural Historians, based in Chicago. “What they were for was a little underground railroad system. They brought supplies into hotels and office buildings. It was a really complex system that was designed to serve the buildings up above.”

“The tunnels are not as rare as you think — Toronto, Montreal, they all have well-developed tunnel systems. We don’t know when they started, but they are really complex and beautiful. And, the way they connect with hotels and office buildings, it is not just an afterthought.”

In Kansas, more than a half-dozen communities boast a system of underground tunnels and shops, including Caldwell, Ellsworth, Lincoln, Leavenworth, Douglass and Fort Scott.

Ellinwood, though, has created a quirky tourist stop from its underground tunnels.

The Wolf Hotel, one of Ellinwood’s premier buildings — and the gathering point for any tour of the tunnels — is listed on the National Register of Historic Places.

The hotel is across from the Atchison, Topeka & Santa Fe Railroad, which reached the community in 1872.

The community was largely settled in 1878 by German Protestant immigrants with last names like Bockemohle, Steckel, Manglesdorf, Clemm and Wolf.

The influx of German residents may have influenced the construction of the tunnels, Starr said.

Through the years, the tunnels served a number of uses, including storage for coal, a refuge during World War I for German residents seeking relief from the area’s strong anti-German sentiment, and perhaps as a center for bootleg alcohol during Prohibition years.

By the mid-1930s to early 1940s, the Ellinwood tunnels had fallen into disuse and were closed to the public.

In 1979, Adrianna Dierolf, now deceased, rediscovered the tunnels after inheriting some of the downtown buildings in Ellinwood.

A few years later, she began showing the tunnels to the public. But her efforts were short-lived because during the summer of 1982, new sidewalks were built on Main Street and city officials had most of the remaining tunnels filled with sand.

Dierolf managed to save a short stretch of Ellinwood tunnels and left three of the underground businesses intact, showing what they might have looked like a century ago.

Her legacy and the remaining tunnels still exist under the two-story Dick Building in Ellinwood.

The tunnel resembles a storm cave, complete with stone walls and musty air.

At the turn of the 20th century, when coal was still delivered by horse and wagon, the wooden sidewalks above the tunnels were lifted, coal was dumped in, and store owners could take the coal, as needed.

“These spaces were relatively common in towns,” said Sarah Martin, Kansas’ National Register of Historic Places coordinator for the Kansas State Historical Society in Topeka. “They were male-dominated spaces — the pool halls, barber shops. One in Ellsworth had a bowling alley. They were rough-around-the edges spaces, places that were dirtier below ground.”

Semis shudder past on U.S. 56, only feet from Ellinwood’s underground tunnels.

The highway those trucks travel is nearly the same route as the historic Santa Fe Trail, active from about 1821 to 1880.

From the mid-1860s until 1873, Ellinwood was a cowtown along the Cox Cattle Trail, said Jim Gray, a cowboy historian from Ellsworth and publisher of the Kansas Cowboy newspaper.

Like one of the major fueling stops found along an interstate today, Ellinwood was a quick stop before moving on — a chance to refuel and refresh.

At the turn of the 20th century, Ellinwood boasted 11 saloons in its underground tunnels, Starr said.

As he led visitors down the wood steps into the underground blacksmith shop, Starr reminded them that they were “the same steps cowboys and drovers walked down.”

Starr pointed out the 19th-century propaganda, a newspaper clipping on the wall encouraging settlement in Barton County:

“There is no region in the United States of the Rocky Mountains where there are more bright sunshiny days … the thermometer rarely sinks below zero … the air is so dry and pure that one scarcely realizes the range of the mercury.”

No horses were brought down into the blacksmith’s shop. They were tied up and left outside, Starr said. But work was done down in these quarters. He jumped on a foot-powered grinding stone and held a hand scythe as sparks flew; pointing out the horse fly nets that horses once wore, a pair of leather chaps and a wagon umbrella from the Manglesdorf General Store.

“Without Adrianna Dierolf, we wouldn’t have nothing,” he said as he led visitors through the tunnels to Jung’s Barber Shop with its original flooring, wallpaper and barber’s mirror.

The walls feature a deer head, a stuffed pheasant and a regulator clock.

But it is the bathhouse where the true uniqueness of Ellinwood’s tunnels comes to light.

It’s one of the few places in Kansas that talks about prostitution, albeit in a PG-rated way.

Sure, Wichita’s Cowtown has the Dixie Lee Saloon Girls who sing and dance.

Dodge City’s Boot Hill has a few calling cards, police dockets and photographs of bad girls gone wild, such as Squirrel Tooth Alice, who kept a pet prairie dog on a chain, and others who did time in jail, said Boot Hill’s curator Karen Pankratz.

And a few years ago the Kansas History Museum in Topeka did a temporary exhibit called “Sinners and Saints” that included a small exhibit of 19th century “working women.”

“The photographs in our collection looked like they had been staged,” said Bob Keckeisen, museum director for the Kansas State Historical Society in Topeka. “You see more in a J.C. Penney’s catalog.”

Which leaves the Ellinwood bathhouse, where 19th-century men could buy the right to a bath — for 15 cents — which included a piece of lye soap, a half tub of water and a towel.

Starr walked to a bed within the underground bathhouse, leaned down and pushed it up and down to give a hint of the squeaky springs.

“Now these whole line of men in the buff are waiting for her service,” he said. “You know what she’s doing? She’s sitting on the bed reading those cowboys bedtime stories for 25 cents.

“Now, if you all believe that, I have a bridge I can sell you.”

And that is the ending to one of the quirkiest tours in Kansas.