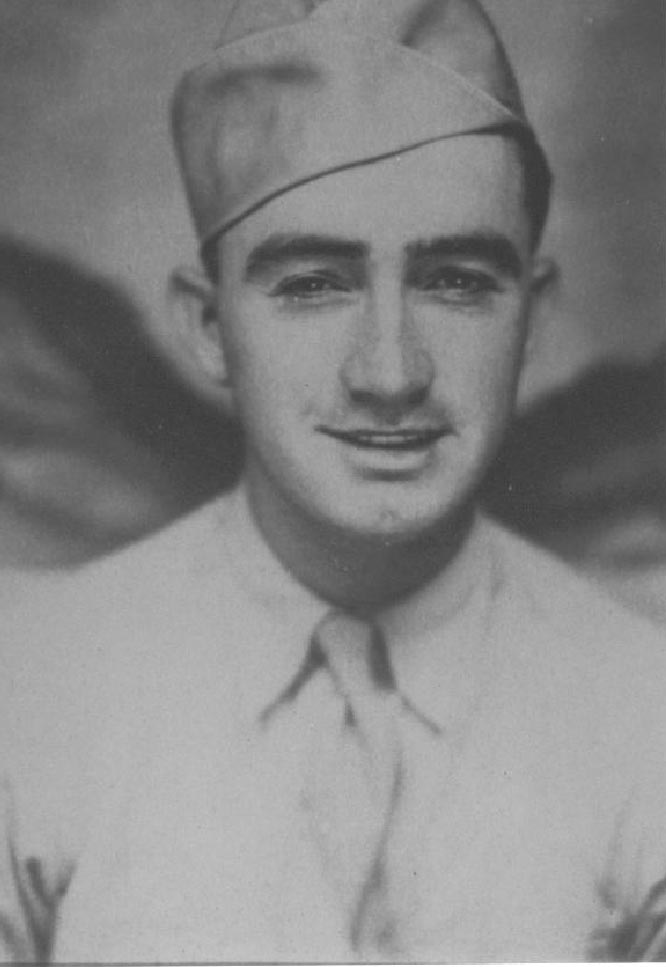 Pvt. Elmo Banning, a Kansas Ranger who was killed on D-Day, June 6, 1944, and whose grave is decorated each Memorial Day by Franck Maurouard and his family. 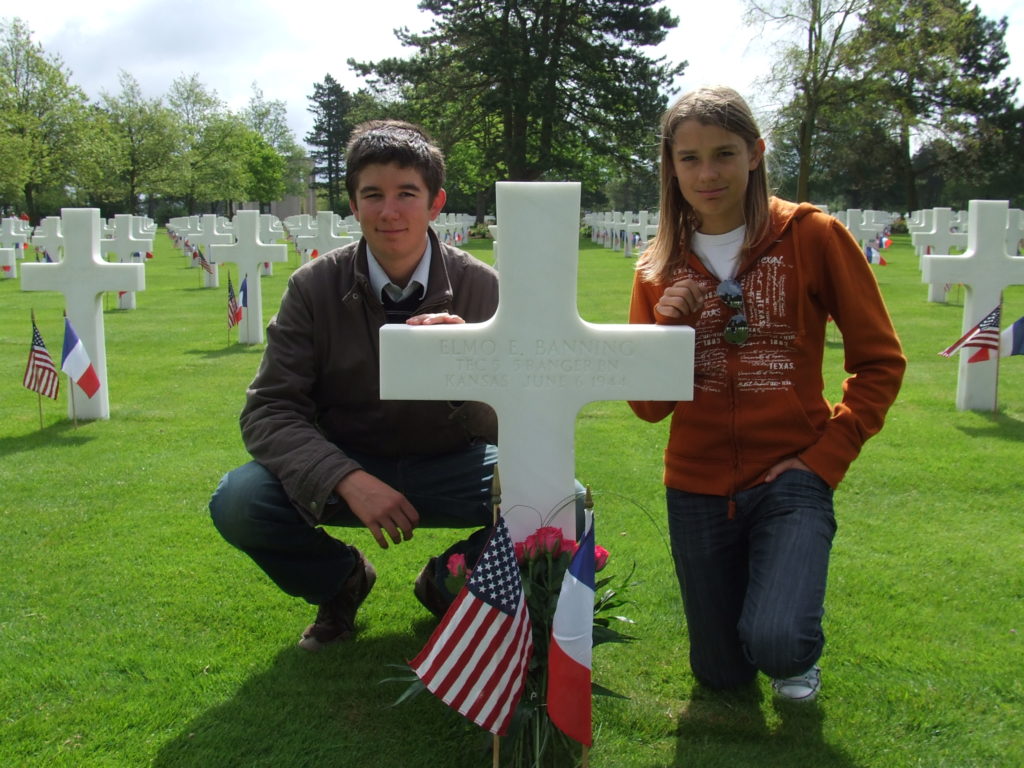 Alexandre and Eloise Maurouard pose beside the grave of Pvt. Elmo Banning on Memorial Day 2010. 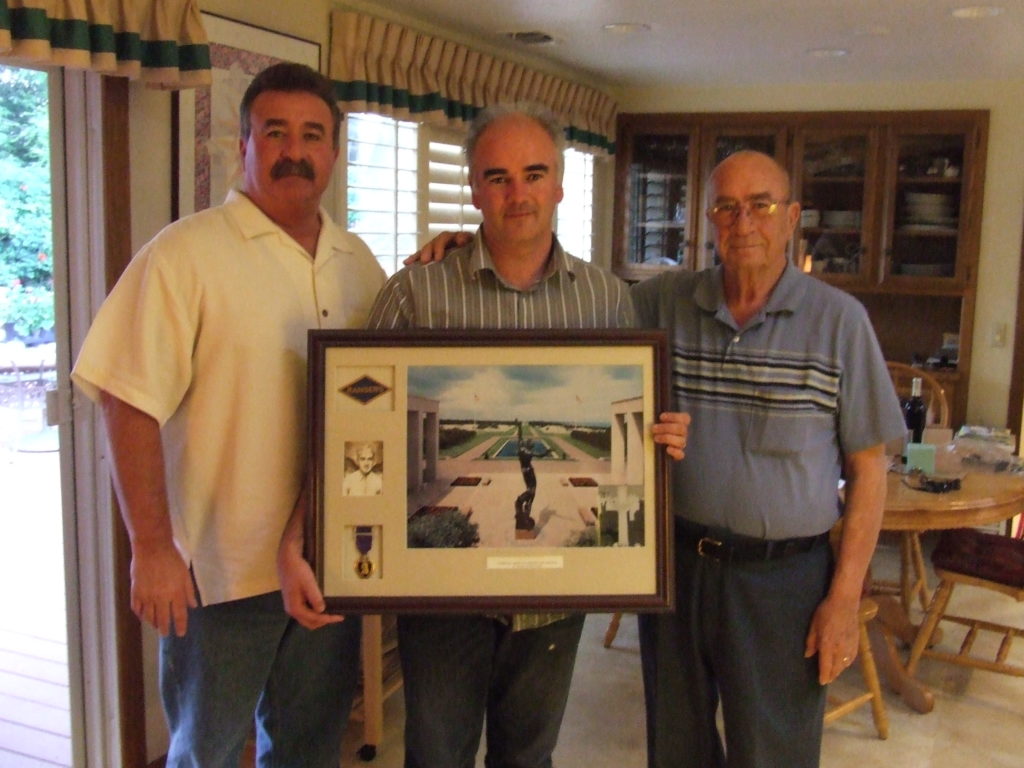 In 2009, Franck Maurouard, center, met with Elmo Banning, named for his uncle who was killed during D-Day, and Pvt. Banning’s brother, Melvin. Maurouard is holding a tribute to Pvt. Banning, including his Purple Heart, photo and Ranger patch alongside a large photo of the Colleville sur Mer cemetery, where Pvt. Banning is buried.

Franck Maurouard and his family of Normandy, France, have not forgotten the sacrifices made by American soldiers trying to liberate France from German occupation during World War II.

Each Memorial Day for the past 10 years, Franck, his wife, Anne, and their children, Alexandre, 16, and Eloise, 14, have decorated the graves of two American Rangers who died in the D-Day invasion, June 6, 1944.

They volunteered to care for the graves in Colleville sur Mer cemetery by applying to Les Fleurs de la Memoire, an organization that encourages French citizens to remember on Memorial Day the graves of Americans who gave their lives to liberate France and who remain forever in French soil. Les Fleurs de la Memoire (lesfleursdelamemoire.com) represents 132 French Fraternal Associations, 70 French towns and villages, and 3,677 French citizens who have adopted, in perpetuity, 10,451 graves.

Maurouard, who served in the French Navy for 17 years and is now a laboratory technician at the school where his wife teaches, requested to be assigned the grave of one Ranger from the 2nd Battalion and another from the 5th Battalion. But he has done far more than decorate the graves of Pvt. Joseph Trainor of Wisconsin and Pvt. Elmo Banning of Sedan, Kan.

He researched the details of their deaths and shortened lives and searched for their surviving relatives. He and his family developed a close relationship with Pvt. Banning’s family, now residing in California.

Banning was 20 when he waded ashore on Omaha Beach. He was on a patrol led by Sgt. Walter McIlwain — who later became a close friend of Maurouard — when the patrol was hit by heavy artillery fire. McIlwain and another soldier were wounded; Banning was killed.

Before the war, young Elmo Banning was a farm laborer earning $8 a week. According to his brother Melvin, eight years younger, Elmo was a typical farm boy, active and mischievous. Melvin laughs while recalling anecdotes about his brother, whom he idolized.

“I followed him around. One time we went to cut wood and he had a bottle of whiskey and gave me a drink. I got drunk. Another time, he had me blow in the gas tank of his car to help start it. I passed out and was lying in the road. Elmo panicked!”

Melvin also remembers the day when two Rangers came to the family’s home to tell his parents that their son had been killed. It was a blow from which they never recovered. Months later, another son, Lyle, stepped on a mine in Germany, and Melvin says his parents were inconsolable when they received the telegram saying he was seriously wounded in action. Young Melvin sometimes felt that he had lost his parents as well as his brother.

In 2009, Maurouard visited Melvin and his son Elmo, named in honor of his uncle, in Sacramento, Calif. Just before leaving France, Maurouard went to Omaha Beach and filled a small box with sand and white pebbles to present to Melvin as a souvenir from the place his brother fought in France.

When asked why decorating the graves and learning the Rangers’ history is so important to him, Maurouard said, “My greatest ambition is to be able to pass on to our future generations the story of the veteran Rangers and other men to whom we as French people owe our freedom. We have decided to take care of two Rangers’ graves because we do not want to forget, and it is our way to say thank you to all of them.”

Maurouard does not know whether the gratitude he feels was instilled by his parents, but he said his father, then 9 years old, was in Grandcamp on D-Day and “saw all the allied invasion vessels coming. He will never forget that sight.” Maurouard’s mother-in-law was only 2 years old at that time and “she still remembers the noise of the bombing.”

Maurouard said he believes that his children will continue to decorate the Rangers’ graves. He has taken his family to World War II Rangers’ reunions in the United States, and his children appear to share his interest in and fondness for the Rangers.

Alexandre Maurouard has created a website that is a tribute to World War II Rangers. The English version can be found at normandiehistoire44.pagesperso-orange.fr/index_ANGLAIS.htm.

The town of Grandcamp has a Ranger museum where Franck Maurouard often serves as a guide to groups of school children, as well as to families of Rangers who visit the area. He wants Americans to know that “people from Normandy generally appreciate the American people who fought for them in 1944.”

It is a debt of appreciation that the Maurouard family pays each Memorial Day.