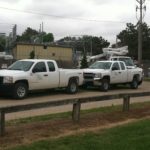 About 5,000 customers lost power around 6 a.m. Sunday morning. Westar crews restored power to most customers around 7:45 a.m. Crews at the power station near Sixth and Kentucky streets were working to repair the issue around 8 a.m. Sunday.

The outage affected areas east of Iowa Street and lasted from about 6 a.m. to about 9:15 a.m., said Erin La Row, a spokeswoman for Westar Energy. However, power was restored to most of the 5,300 customers affected by the outage by 7:45 a.m.

As of Sunday evening, however, La Row said she was not able to provide detailed information about what caused the equipment failure.

“Equipment failure in general happens from time to time. Unfortunately it does happen,” La Row said. She said Westar would likely have more information on the outage today.

Sunday’s outage was at least the third since Feb. 23, when a switch failure on a power pole near 25th and Alabama streets, which La Row said had caught fire, cut power to about 750 customers in the area from Kasold Drive to Haskell Avenue and 25th to 37th streets. La Row was not able to confirm whether the switch failure caused the pole fire or vice versa.

A larger outage, affecting nearly 2,000 customers, occurred on March 22 when a transformer at the electrical substation near Sixth and Tennessee streets — the same substation associated with Sunday’s outage — was damaged when a bird flew into it. That outage was concentrated in and around the downtown area.