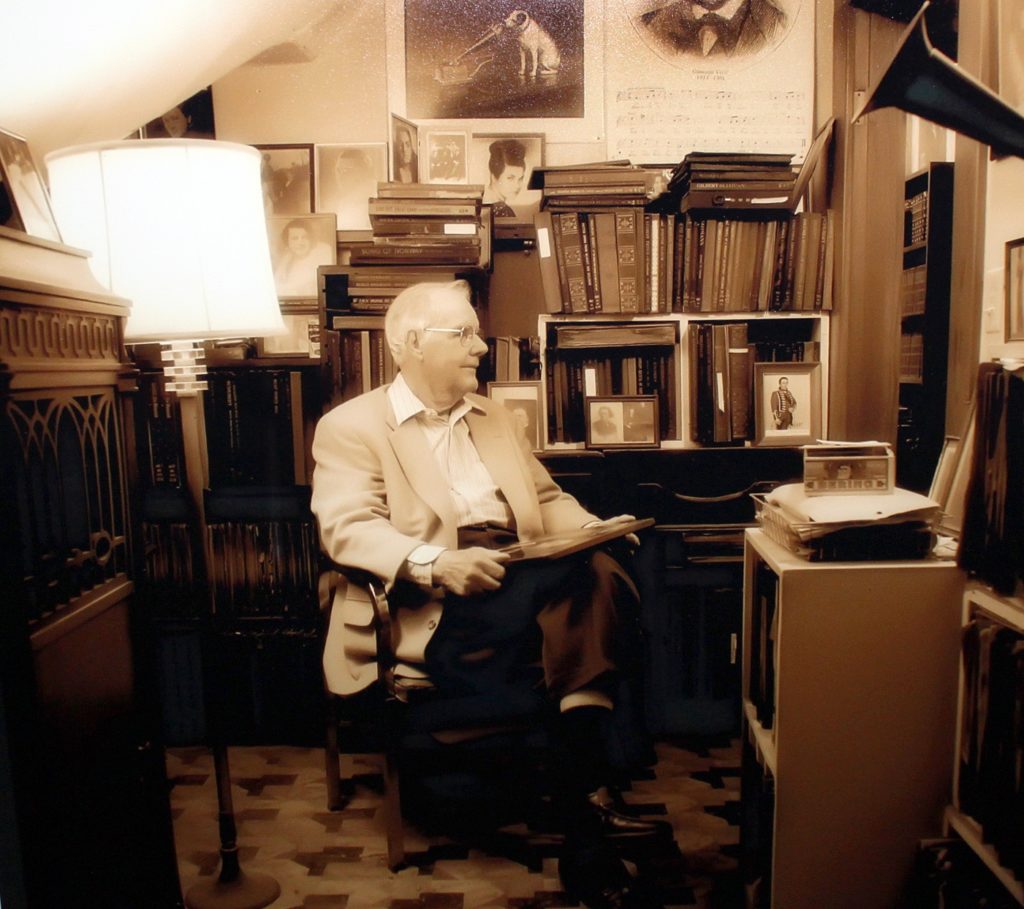 Jim Seaver surrounded by his opera collection at his home on Louisiana and Sixth Street.

Jim Seaver was an opera lover, a whiz on the tennis court and a fixture of the Western Civilization program at Kansas University.

He was also the uncle of baseball Hall of Fame pitcher Tom Seaver, a world traveler and, along with his wife, Virginia, a volunteer extraordinaire for Douglas County Senior Services.

“He was closest to a Renaissance man as I could think of,” said Lois Clark, who met Seaver 53 years ago when her husband arrived at KU as a graduate student.

“He was a good model,” she said. “They just don’t make them like that any more.”

It was one of the longest running shows in radio history. Seaver produced his last show a week ago and was thinking of the program up until the day he died, KPR general manager Janet Campbell said.

“It was more than a hobby, even though that is what he called it,” she said.

The success of Seaver’s radio show was largely based on his extensive collection of one-of-a-kind opera recordings, many of which he kept in his attic.

Campbell wasn’t sure what would become of Seaver’s show, but noted they had many years of recordings from which to draw.

“I don’t see it going away in the immediate future,” she said.

Seaver came to Lawrence in 1947 as a history professor at KU. A California native, Seaver was the captain of the tennis team at Stanford University and later coached the KU men’s team to a Big Seven Championship.

Seaver spent almost three decades as the head of the Western Civilization program. Late Roman history was his specialty and, along with opera recordings, he collected ancient coins.

“He was really committed to the university in a way that is rare now,” said Don Marquis, a KU philosophy professor who in 1967 became the assistant director of Western Civilization. “He had a real following.”

Another great passion of Seaver’s was traveling. He led tours to the sites of ancient civilizations in Rome, Greece, Turkey and Egypt. For those who couldn’t come, Seaver would host “trips” as part of the senior center’s Armchair Travel for the Leisure and Learning Program.

“He was a living library,” said Douglas County Senior Services executive director John Glassman, who had lunch with Seaver about once a month.

“When you are around someone of that level of intelligence and articulation, you know it. I could tell why his students loved him so much and stayed in touch with him over the years,” Glassman said.

Along with sharing his travel experiences, Seaver and his wife delivered hot meals to homebound seniors for years. Their volunteer work inspired Douglas County Senior Services to create the Jim and Virginia Seaver Volunteer Award in 2007. It has been presented annually since.

“He was such a good gentleman,” Glassman said. “This community is going to be poor without him.”

The family is working with KU to arrange funeral services.

Virginia said she remembers her husband had once told her of an ancient philosopher who wanted his gravestone to read that he made a difference.

“And, I think he did make a difference for a lot of people and that is what he aimed to do,” she sad. “He influenced his students, and he influenced a generation of radio listeners.”