Paul Stevens, associate professor of horn at Kansas University, has worked on Hollywood blockbusters, TV shows, rubbed shoulders with foreign government leaders, performed with world-famous artists and played in some of the world’s finest concert halls. But he still underplays his achievements.

“I have still so much to learn about and achieve with the horn,” he says.

“The horn’s always the master, never to be perfected. You keep chasing, finding ways to make it more expressive, and trying to convey what the composers intended. There’s always more to achieve, and that’s the fun of the challenge.”

Stevens grew up in Santa Monica, Calif. He inherited his love of music and films from his dad, who worked for Paramount Studios, and his mom, from Kingman, who was (and remains) an international concert pianist. His first musical performance was derailed. 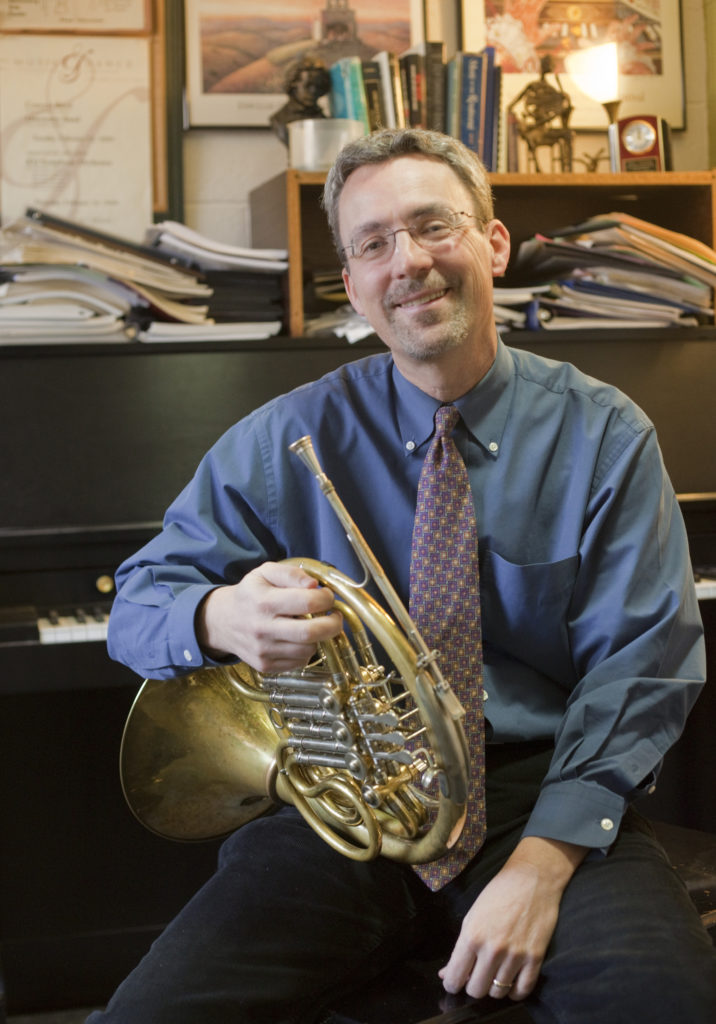 Paul Stevens, associate professor of horn at KU, has worked on Hollywood blockbusters, TV shows and played in some of the world's finest concert halls.

“When I played a violin piece called ‘Airplane’ for the neighborhood boys, they said ‘the airplane crashed,’ so that ended that,” he explains.

“I then tried piano but felt more attracted to the horn. I loved the way it looked before falling in love with its sound.”

Stevens won a full scholarship to Rice University, Houston, and played with the Houston Symphony. He then accepted a scholarship to Juilliard but quit after a year to pursue his dream of becoming a writer.

“Studying English at the University of California was an incredible experience, but I couldn’t get away from music,” he says.

“I’d bring a brass quintet into Shakespeare class to play iambic pentameter rhythms or make my professor study Brahms 1 and compare it to Wordsworth’s ‘Prelude.'”

He’s performed worldwide, including Asia and the Caribbean, in Poland and Haiti as guests of the countries’ governments, and played principal horn under conductors such as Leonard Bernstein and Zubin Mehta.

After graduating from Juilliard, Stevens returned to L.A. and worked on Hollywood movies and TV soundtracks such as “Ransom,” over 50 episodes of “Star Trek: The Next Generation” and “Mickey’s Nutcracker.” While working at Disney, he met his wife, Annie. Two children later, priorities changed.

“I was working 16 hours every day and was rarely at home,” Stevens says. “Family was priority for Annie and me, so I decided to get my doctorate at UCLA and come to Kansas. I’d spent childhood summers here with my grandfather. I loved fishing with him, watching fireflies, thunderstorms and old folks playing bridge. I thought Kansas was beautiful and knew it’d be a great place to raise my children, better than L.A.”

He came to KU in 2000 and remains passionate about teaching, playing and performing. He plays frequently with the Kansas City Symphony and Lyric Opera.

“I love Kansas,” he says. “Lawrence is a friendly, creative place, with great schools for my kids.

“The Lied Center is amazing, and I love our university and music school. Great things are happening here.”