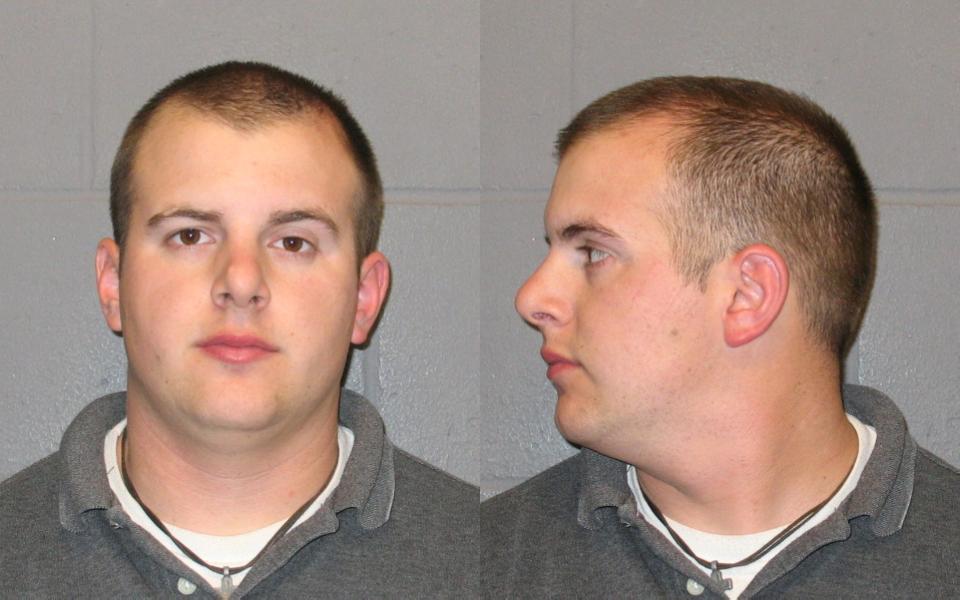 Skid marks lead to a smashed car on U.S. 59 north of Lawrence on Tuesday, Nov. 23, 2010. Douglas County Sheriff's officials said at least one person died in the accident, which involved a stolen vehicle. 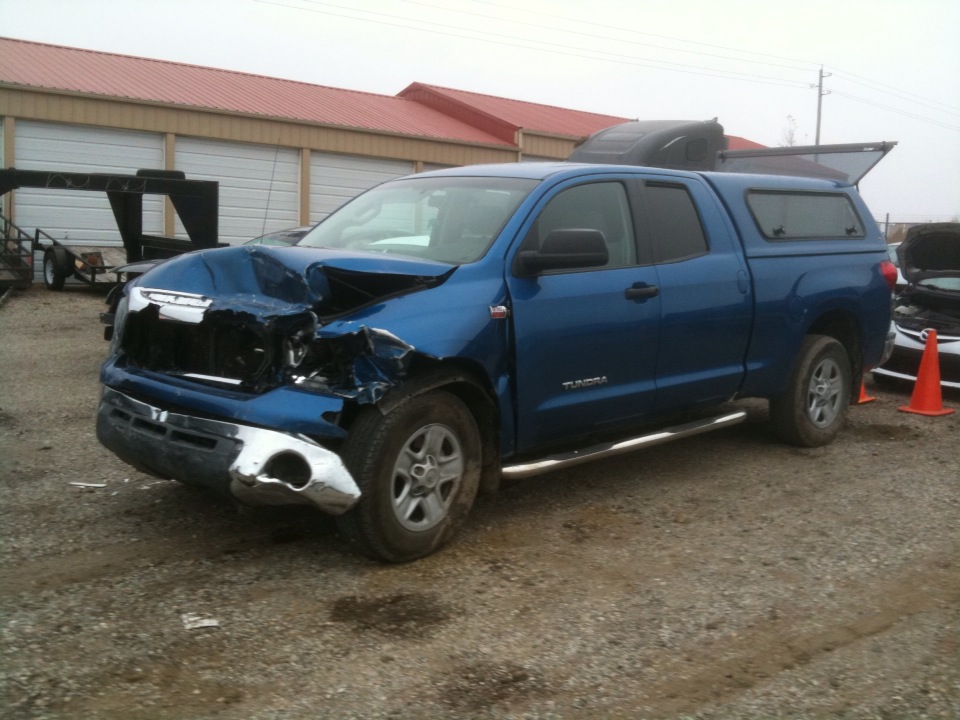 This blue Toyota Tundra was stolen from a USA Today delivery driver on the Kansas University campus on Tuesday, Nov. 23, 2010. The truck was then involved in a fatality crash on U.S. 59 north of Lawrence that same morning. 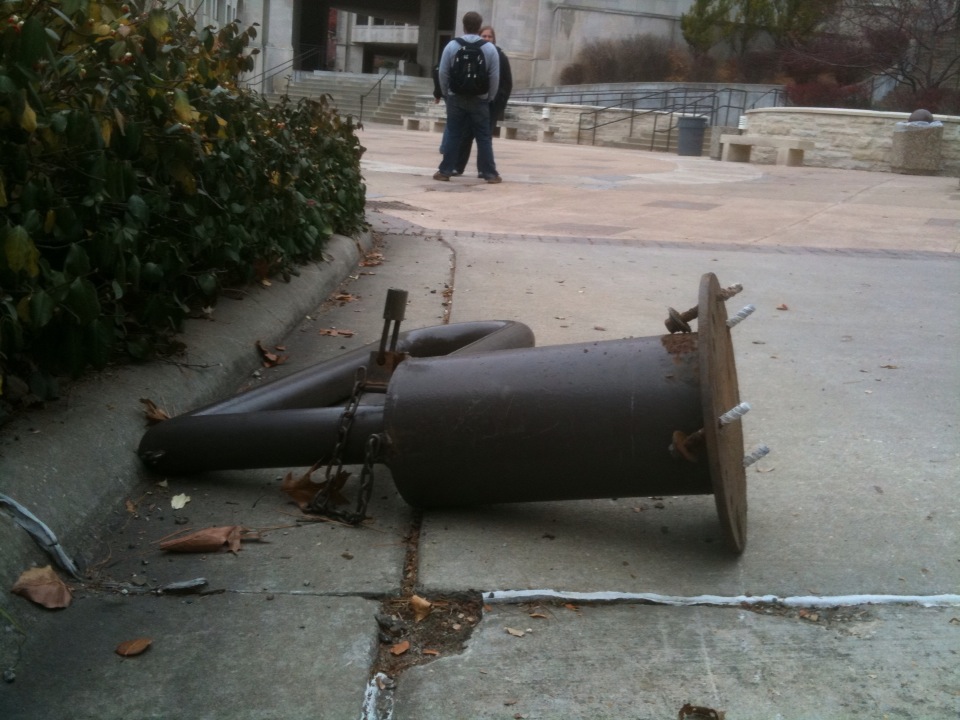 A damaged barrier sits on the sidewalk behind Wescoe Hall on the Kansas University campus on Tuesday, Nov. 23, 2010. The barrier was damaged when a USA Today delivery truck was stolen about 3:40 a.m. The vehicle ultimately ended up being involved in a deadly accident on U.S. Highway 24/59 north of Lawrence.

Paul and Shelley Freeman sat clutching hands Friday in the front row of a Douglas County courtroom — taking deep breaths — as Greg Benefiel, an assistant district attorney, read out loud a series of events that led to the death of their 21-year-old son Cameron last November north of Lawrence.

Zachary Harrison, 23, a former Air Force airman from Hutchinson, pleaded no contest and a judge found him guilty of the original nine charges he faced in the case, including involuntary manslaughter while under the influence of alcohol and three counts of aggravated battery.

“It’s been such a devastating experience since Nov. 23. We’re numb,” Paul Freeman, of Lincoln, Neb., said after Harrison’s plea. “In all of our hearts, every day is difficult. It’s very, very difficult. Since we haven’t been to the sentencing yet, it’s kind of anti-climactic right now.”

Prosecutors said Harrison’s blood-alcohol content after the crash was 0.183, which is more than twice the legal limit to drive in Kansas. He was accused of stealing a newspaper carrier’s truck from Jayhawk Boulevard on the Kansas University campus early that morning, and while traveling at least 78 mph — maybe faster — eventually rammed into the back of a car on U.S. Highway 24-59, killing Freeman and injuring three of his friends. The Nebraska men were headed back to Lincoln after attending a concert in Lawrence.

“This is one of the worst cases that we see in our business, when you have an incident like this that just suddenly and inexplicably cuts short the life of a young man and forever changes the life of three other young men and their families,” Douglas County District Attorney Charles Branson said. “It’s just shocking how fragile life can be and how a bad decision by one person can affect a lot of people.”

Harrison, who was in Lawrence that night visiting his brother, faces prison time, but his defense attorney Jason Billam told District Judge Sally Pokorny he planned to argue for probation during the Aug. 9 sentencing.

At the time of his arrest, Harrison was serving as an airman in the U.S. Air Force stationed in Little Rock, Ark., but Branson and Billam said Friday he had been discharged.

Harrison, who has been free on bond for several weeks, said little during the plea hearing except for “yes, ma’am” and “no, ma’am” when answering Pokorny’s questions.

Pokorny told him he faces anywhere from 38 months to 14 years in prison on the DUI manslaughter conviction, depending on his criminal history, which attorneys expect to be minimal. He also faces a minimum 31 months on one aggravated battery count and a minimum seven months each on two other aggravated battery charges. Harrison was also convicted of leaving the scene of a fatality accident, failing to give notice of a fatality accident, following a vehicle too closely, criminal deprivation of property, and failing to report damage to property for striking a gate on the KU campus.

Pokorny will also decide whether to run the sentences consecutively or concurrently.

After the no-contest pleas, Benefiel read in court details of the prosecution’s case — most of which had already been made public by the Douglas County Sheriff’s Office.

The driver of the Mazda 626 Freeman was traveling in, Casey Kettler, told officers he was headed north on the highway at 55 mph with the cruise control on around 3:30 that morning. He saw a pickup truck approach from behind at a high rate of speed.

“The next thing he remembered was waking up in a ditch,” Benefiel said.

The Mazda traveled about 480 feet upon impact with the Toyota Tundra pickup truck Harrison had taken. The newspaper carrier had left the truck running in front of Watson Library at KU. A Toyota employee later inspected the “black box” that recorded the truck’s use 5 seconds before the crash.

“(It) was traveling at 78 mph with 100 percent of the throttle, and there was not any brake prior to the crash,” said Benefiel, who also noted the equipment wasn’t able to record speed faster than 78, meaning the exact speed of the truck was unknown.

Officers later arrested Harrison north of Lawrence when he eventually stopped the truck.

Kettler had an injured left eye that eventually required plastic surgery. Two other men in the Mazda, Michael Larsen and Ferndando Pages, also suffered injuries. Pages had a liver laceration and head injury.

The Freeman and Kettler families declined to comment after the plea hearing about any possible civil legal action in connection with the crash.

The Freemans now want the case to bring awareness to the dangers of drunken driving. They carry around fliers that direct people to the website cameroneffect.com, a movement that urges people to perform seven acts of kindness or thoughts of compassion a day. They originally spread the idea on Dec. 7, 2010, which would have been Cameron’s 22nd birthday.

Paul Freeman said the crash and Cameron’s death spread out and devastated family and friends like a “mushroom cloud” and that he hoped future penalties could be more severe for drunken drivers.

“It happens over and over again,” Shelley Freeman said. “If there’s any war that we need, it should be the war against drunk driving.”