Entire SLT might be a toll road, if feasible 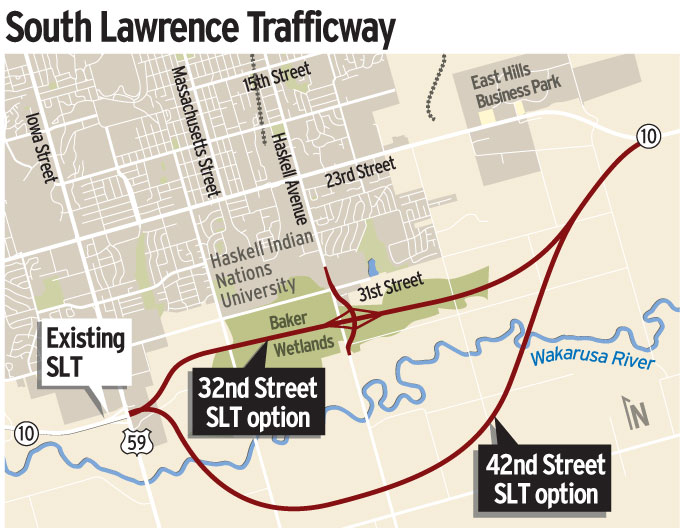 Several Kansas City-area projects also were announced by the Kansas Department of Transportation on Friday. Among those that may affect Douglas County commuters are:

The South Lawrence Trafficway now has a checkbook.

Gov. Sam Brownback announced Friday morning that the state’s already-approved comprehensive transportation plan will include $192 million to complete the final leg of the trafficway, which will connect Kansas Highway 10 east of Lawrence to Interstate 70 west of the city.

Now all that stands in the way of completing the long-debated bypass — perhaps by the end of 2015 — is a final legal victory in federal court regarding whether the road can run through the Baker Wetlands.

At an announcement event in Kansas City, Kan., Brownback expressed confidence that the state would overcome that hurdle.

“We are going to finish the South Lawrence Trafficway,” Brownback said to a loud round of applause from a crowd that included several city, chamber and Lawrence community leaders. “It will get done. We are going to do this.”

The funding will be enough to build a four-lane freeway from the eastern edge of Lawrence at the Kansas Highway 10 and Noria Road intersection to U.S. Highway 59 in southern Lawrence, where the western portion of the bypass now dead-ends.

That route would follow longtime plans to build the road along a 32nd Street alignment that would go through the Baker Wetlands between Louisiana Street and Haskell Avenue.

State officials, however, did throw a new twist into the project — which has been debated and legally challenged for more than two decades: KDOT leaders said they will study the feasibility of making the entire trafficway a toll road.

KDOT Secretary Deb Miller said the study will focus on ways to allow local traffic to use the SLT without paying a toll while charging motorists who use the road as a bypass. She said, however, that any toll likely would be less than a dollar in order to encourage drive-through traffic to avoid 23rd Street.

Miller said the toll study will be completed in the next two years, which is also how long it likely will take to complete the roadway’s final design.

Lawrence city officials said they would take a wait-and-see approach on the toll issue. On Friday, they were thrilled that the project was moving closer to completion.

“It is going to make travel a lot more convenient in Lawrence and a lot safer,” said City Commissioner Bob Schumm.

But what the project could do to boost business activity in Lawrence was creating a major buzz at the announcement ceremony, which was held on the grounds of the Kansas Speedway in western Wyandotte County.

The state is estimating the $192 million project will produce $3.7 billion worth of economic impact to the region in the coming years. The SLT was estimated to have the highest economic impact of any project selected for funding in the state’s transportation program.

Brownback said the project will create an economic boon in the life sciences industry and other arenas because it will better connect Kansas University and its research capabilities with Johnson County and the Kansas City metro area.

“This will have an enormous impact,” Brownback said. “It will make Lawrence more a part of Kansas City, and that will be good on a couple of accounts.”

Tom Kern, president of the Lawrence Chamber of Commerce, said that once the project is completed, Lawrence’s East Hills Business Park and an industrial park that is being developed at the former Farmland Industries site will become more valuable. He said there have been at least three businesses in the last three years that have cited east-west traffic flow problems as a major reason for going elsewhere.

“That’s several hundred jobs right there,” said Kern, who said the companies included an engineering firm, a manufacturer and a wind energy company. “There has been nothing bigger in terms of an economic development announcement for Lawrence and Douglas County for a long time. This project is probably the most significant announcement in a decade.”

State leaders, however, acknowledged they are taking a risk by starting the project. Environmentalists and Native American groups have filed a federal lawsuit alleging the project’s route through the wetlands had not gone through the proper review process. U.S. District Judge Kathryn Vratil ruled in November that the project had gone through the necessary federal review, but her decision is now on appeal.

Miller, the state’s transportation secretary, said her department will start spending money on completing the design of the project prior to the court issue being resolved. She estimated the court case could take another 18 months, and she wants the project to be ready to start construction in about 24 months.

“We’re clearly taking a calculated risk as it relates to whether we could lose the lawsuit,” Miller said. “But we’re reasonably confident that won’t happen. We believe it is a risk worth taking.”

Lawrence resident and Topeka attorney Bob Eye — who represents the plaintiffs in the lawsuit — said it was irresponsible to spend state dollars that would be forever lost if the court rules the project can’t be built. An estimate of how much the state will spend prior to the lawsuit being completed wasn’t immediately available Friday. But Eye said the state’s decision did not surprise him.

“When it comes to the South Lawrence Trafficway and the eagerness of federal and state officials to pave over wetlands, nothing surprises me,” Eye said. “They have a zeal for destroying wetlands that is extraordinary.”

State leaders deny that claim. They said the project will include $10 million in wetland mitigation efforts, and will include a new visitors center for the wetlands and improvements that will make the area more accessible to the public. The SLT project will take about 56 acres of the wetlands. About 380 acres of manmade wetlands will be constructed adjacent to the site.