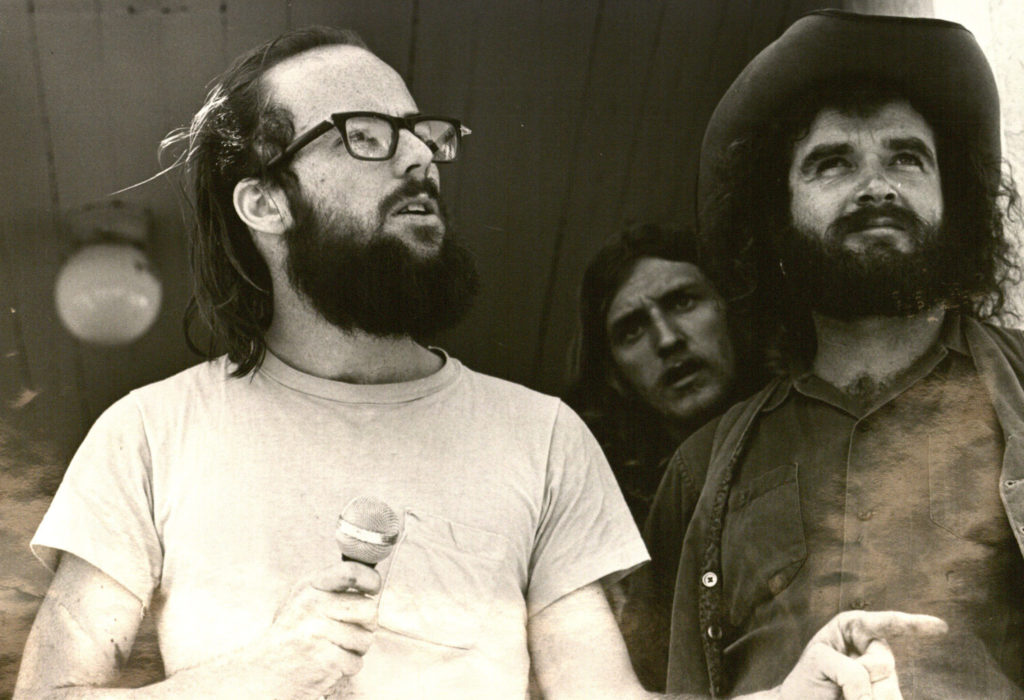 In 1970, George Kimball (on right) ran for Douglas County Sheriff. At the time, Kimball was known as the leader of the street people, who were a collection of radicals, hippies and runaways that lived in the Oread neighborhood.

A one-eyed radical who once campaigned as a “two-fisted” candidate for Douglas County sheriff died this week in New York, where he had become one of the country’s most acclaimed boxing writers and a longtime chronicler of the nation’s culture.

George Kimball, who enrolled at Kansas University with an ROTC scholarship in the early 1960s — only to be kicked out of school soon thereafter — should be remembered as more than a simple counterculture figure or as a sports reporter or columnist, said Bill Tuttle, a friend.

“He was a fabulous writer, and a very astute observer of our life and times,” said Tuttle, a retired Kansas University history professor who taught courses about the 1960s and had known Kimball since those early years at KU. “He should not be dismissed as a radical hippie who ran for sheriff. He did all that. But he should be remembered for his writing. He was the best boxing writer of his era, and that’s saying something.”

Kimball had returned to Lawrence earlier this year during a tour promoting one of his books. Tuttle notes that Kimball couldn’t speak for prolonged periods because of throat cancer, but had hired an actor to read passages for the audience.

“He actually mouthed the words,” Tuttle said. “It was very touching.”

Kimball, 67, worked as a columnist for the Boston Herald from 1980 to 2005, covering boxing, traveling with the Red Sox and writing about the personalities and the people who play games for a living.

Such work provided an outlet for his creativity, and an ability to make a living, but even his best of friends know he’ll be forever tied to the 1970 election. Yes, he won the Democratic nomination for county sheriff as the lone candidate. And he went on to lose to incumbent Rex Johnson.

But the spectacle was all Kimball, who didn’t hesitate to focus the campaign through his glass eye. Among his common campaign slogans: “Vote for me. I’ll keep an eye out for you.”

He would go on to have a warrant issued for his arrest, allegedly for inciting riots. He was a regular reciting poetry at the Gaslight Tavern, which was just north of the Kansas Union, and other locations in town. He would leave the state to write pornographic novels in New York before working at an underground newspaper in Boston and returning to Kansas every now and again to see friends, including author William Burroughs.

All along, friends say, he never was anything but interesting: Writing, rabble-rousing, even marrying.

“I could probably rattle off all the wives’ names,” Lawrence resident Wayne Propst said, but noted that the task would take too long. “One of them, her husband doesn’t even know she was married to George.”

Kimball had been diagnosed with cancer in 2005. He is survived by his wife, Marge Marash.