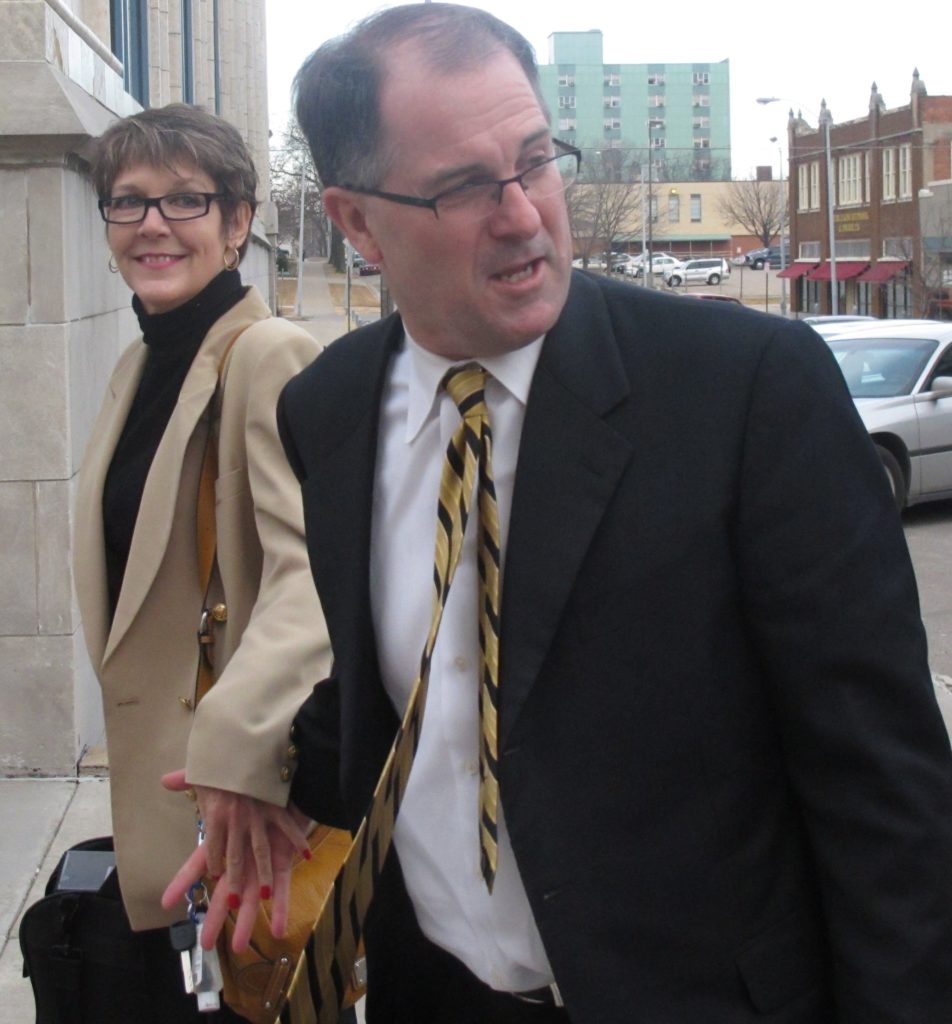 Former Kansas Attorney General Phill Kline and his wife, Deborah, arrive for a hearing before a state panel on a professional ethics complaint against him, Monday, Feb. 21, 2011, in Topeka, Kan. The complaint before a three-member panel of the state Board for Discipline of Attorneys stems from Kline's investigations of abortion providers while in office.

Topeka ? Former Kansas Attorney General Phill Kline sought Tuesday to rebut a key allegation in an ethics complaint against him, testifying during a hearing that he did not aim to identify adult patients of the late Dr. George Tiller during an investigation of the Wichita abortion provider.

Kline said instead he was trying to identify child victims of sexual abuse and anyone traveling with them when he subpoenaed records from a hotel near Tiller’s clinic. It was his second day of testimony before a three-member panel of the state Board for the Discipline of Attorneys, which will recommend to the Kansas Supreme what, if any, sanctions Kline should face over the complaint.

The complaint alleges Kline and his subordinates mishandled abortion patients’ medical records and misled other officials while investigating Tiller’s clinic and a Planned Parenthood clinic in the Kansas City suburb of Overland Park. Kline, who investigated the clinics as attorney general from 2003 to 2007 and as Johnson County district attorney from 2007 to 2009, vigorously disputes those allegations.

Part of the complaint says Kline and his staff falsely claimed in court documents and proceedings that they never tried to identify adult abortion patients. It says Kline’s office subpoenaed records in 2005 from a hotel near Tiller’s clinic that offered his patients a discount.

Records from the attorney general’s office show investigators tried to identify adults staying at the hotel. Kline testified Tuesday that the goal was to identify “traveling companions” of children seeking abortions, so investigators could determine whether Tiller had reported sexual abuse of the children to authorities, as required by law.

“We knew that the children would not be registering under their own names,” Kline testified. “Yes, adult patients stayed there, but that wasn’t the purpose of the subpoena.”

Kline filed misdemeanor charges against Tiller in December 2006, accusing the doctor of performing illegal late-term abortions and failing to adequately report the details to the state, as required by law. The case was dismissed for jurisdictional reasons, and Kline’s successor filed different misdemeanor charges the following year.

Tiller was acquitted in 2009, shortly before he was shot and killed while attending church.

A criminal case against the Planned Parenthood clinic, filed by Kline as Johnson County district attorney in 2007, is pending. The clinic denies the allegations in the 107 charges that it performed illegal abortions and falsified records.

Clinics and abortion rights advocates have accused Kline of conducting a fishing expedition during his time as attorney general that threatened patients’ privacy. His political opponents milked the issue, which was a main reason he lost his bid for re-election as attorney general in 2006.

After that loss, Republicans selected Kline to fill a district attorney vacancy in the Johnson County, but he lost the 2008 GOP primary for the post. He’s now an assisting visiting professor of law at Liberty University in Lynchburg, Va., founded by evangelist Jerry Falwell.

Statements by Kline and subordinates in court proceedings and documents relating to his abortion investigations were in keeping with Kline’s public stance that he didn’t need — or want — to know the names of adult abortion patients.

Kline always said publicly that he didn’t need — or want to know — the names of adults who had abortions. But under questioning by Stanton Hazlett, the state disciplinary administrator who filed the complaint, Kline acknowledged a review of the hotel records could have identified Tiller’s adult patients. Internal memos showed an investigator for the attorney general’s office did try to identify adult patients, but Kline noted that doing so allowed the office to disregard information about non-patients.

Hazlett questioned Kline for more than three hours Monday, the first day of the hearing on the ethics complaint against him.

Kline and his attorneys argue that much of what the complaint describes as misconduct regularly occurs in criminal investigations.

For example, the complaint alleges that Kline’s staff misled the state Department of Social and Rehabilitation Services in 2003 to obtain data at the start of its investigations of the clinics.

Kline wouldn’t concede the department had been deceived but said he viewed SRS as a potential witness. He said courts regularly allow law enforcement officials to withhold information from witnesses — and even actively deceive them and suspects — to protect an investigation. Misleading SRS, he said, “would not have been a problem.”

The state Supreme Court — which already has criticized Kline in opinions in abortion cases — could impose no sanction or a punishment ranging from an informal admonishment to the loss of his license to practice in state courts. Kline’s license was suspended in October after he didn’t pay a $50 annual fee.

“I don’t believe I should be here, and I didn’t want to pay you money,” Kline told Hazlett.