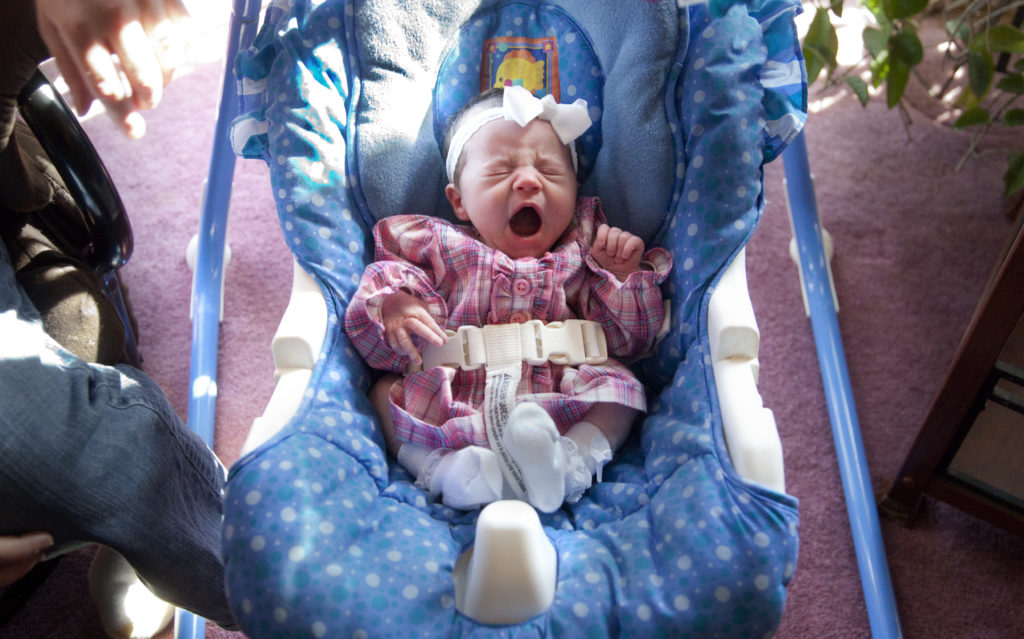 Alyssa Lynn Leming gives a big yawn in her rocker on Monday in her Lecompton home. Baby Alyssa's birth on Friday, Feb. 18, 2011 happened in an elevator at Lawrence Memorial Hospital after her mother, Crystal Leming, went into labor unexpectedly. 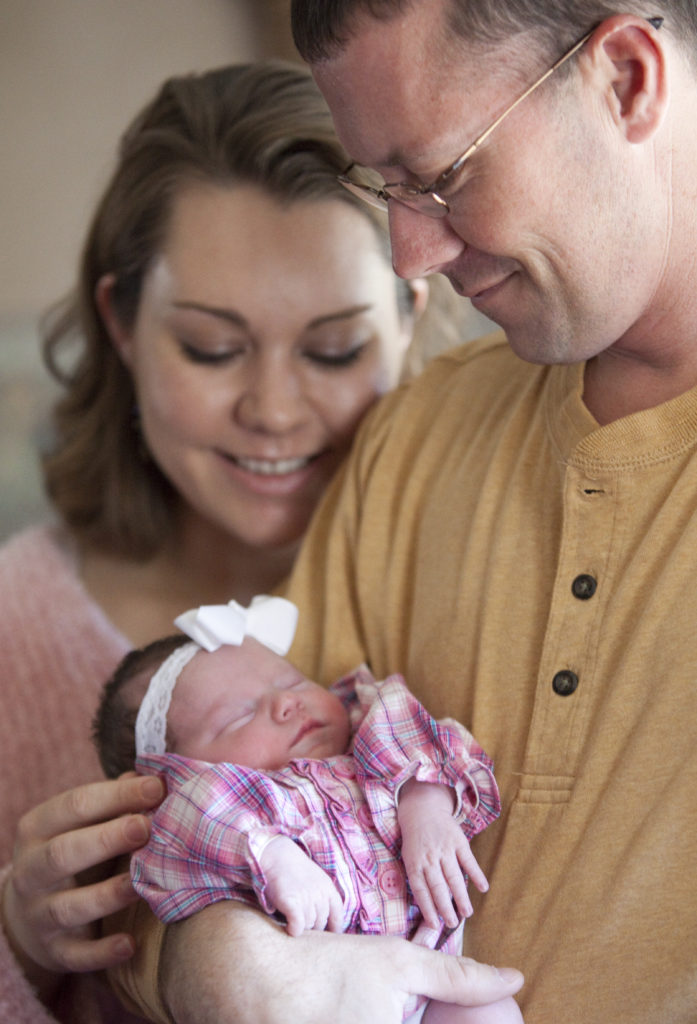 Patrick and Crystal Leming are pictured with their infant daughter, Alyssa, in their Lecompton home on Monday. Alyssa was born before her mother could make it to the delivery room at Lawrence Memorial Hospital, and arrived in the elevator.

Alyssa Lynn Leming may forever be known as “Ellee.” That’s short for elevator, a nickname family members already have given the infant.

Alyssa came into the world a lot quicker than her parents, Patrick and Crystal Leming, expected. The Lecompton couple spent almost four years trying to get pregnant, but their first baby wasted little time in making her debut.

Less than an hour after Crystal’s serious contractions started Friday night, Alyssa was born in an elevator at Lawrence Memorial Hospital.

“We really didn’t think she was going to come that quick,” Patrick said.

Alyssa is the first elevator baby that LMH employees can remember, and she wasn’t even supposed to be born in Lawrence.

Patrick, 35, and Crystal, 25, had been working with a doctor in Olathe and planned to have the baby there. In fact, they made a trip to the Olathe hospital Friday morning but were sent home with a pain medication prescription for Crystal.

About 8 p.m., Crystal knew things definitely were getting serious. So the couple started out on their second trip to Olathe.

But near 31st and Iowa streets, Crystal knew they wouldn’t make it.

“All the sudden, the contractions are horrible and there’s no time in between them,” Crystal said.

Patrick called 911 and headed for a nearby fire station at 1911 Stewart Ave. Firefighters and EMTs had an ambulance ready and took Crystal to LMH.

But on their way upstairs to the labor and delivery unit, “Ellee” was born.

“About the time the elevator doors open, I say, ‘Can somebody please catch her head?’ and there she was born, right in the elevator,” Crystal said.

By the time Crystal saw Patrick again, they had their first child, 5 pounds, 11 ounces and 18 inches long. A child they really weren’t sure they would ever have.

“We had finally gotten to the point that when people asked if we were having children, I said we couldn’t,” Crystal said.

Crystal plans to take baby Alyssa to the station soon to see the firefighters and EMTs who helped with the birth.

“She has been marvelous and apparently already has a flair for the dramatic,” Crystal said.