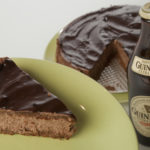 I woke up one day with the idea for this recipe. Who doesn’t wake up thinking about cheesecake and beer? I’m not sure what that says about me. But I do have a good reason.

I had some leftover Guinness in my fridge after making my friend a chocolate stout cake for her birthday and was thinking about how to use it. And a cheesecake came to my mind while getting out of bed. Obviously this would be my first thought, not just drinking it.

In college, I went through a cheesecake phase. I baked a lot of cheesecakes, which led to my purchase of my first springform pan, a life-changing experience. I even have a whole book with just cheesecake recipes.

I haven’t baked as many recently — as I’m just coming off my pie-baking phase — but this seemed like a fun idea to try to perfect for St. Patrick’s Day, which is just around the corner.

My book with all the cheesecake recipes, “Cheesecake Extraordinaire” by Mary Crownover, has a whole chapter dedicated to beverage-based cheesecakes, but nothing with stout beer. So I adapted a mocha cheesecake recipe. Chocolate and coffee pair well with Guinness.

For the crust, I substituted graham cracker crumbs for the crushed vanilla wafers because I already had some in my cabinet. The first time I made it, I left the instant coffee in, but the second time, I omitted it. I wanted to try it both ways, but it’s up to you how strong you want the coffee flavor. There is also coffee in the ganache on top.

In the filling, I omitted the coffee and added the Guinness. The original recipe called for whipping cream. But when it came time to add it, I panicked. I had visions of a cocktail dancing in my head. If you’ve ever taken too long to drink an Irish Car Bomb, you know what happens. The Irish cream curdles in the Guinness. Yeck. No one wants a curdled cheesecake.

So I did what every good chef would do, I Googled it. I read about cream and cocktails and acid and fat content. I’m no expert, so I just left the whipping cream out. Just in case. But then I had another slight moment of panic when I added the Guinness to the cream cheese mixture. No worries though. I just kept right on stirring. There was no curdling.

Making the ganache for the top was drama-free. The original recipe called for shortening. I substituted cream to make it a mocha ganache, which is chocolate melted in cream. How can you go wrong with chocolate, coffee and cream?

One of my friends I’ve known since college said this cheesecake is her favorite thing I’ve ever baked. Now I don’t want to hype it too much, but I’d recommend skipping the curdling cocktail and going straight for this on St. Patrick’s Day.

In a bowl, stir together graham cracker crumbs, cocoa and coffee (if you are using it). Add melted butter. Stir together until well-combined. Press mixture evenly on the bottom of a 9-inch springform pan.

Combine cream cheese, sugar and cornstarch. Beat until smooth. Add eggs and egg yolk, one at a time, beating well after each addition. Add Guinness and vanilla. Stir until well-combined. Stir in melted chocolate. Pour mixture over crust. Bake at 350 degrees for 15 minutes. Lower the temperature to 200 degrees and bake for 1 hour and 10 minutes or until the center no longer looks wet or shiny. Remove the cake from the oven and run a knife around the inside edge of the pan. Turn the oven off. Return the cake to the oven for an additional hour. Chill, uncovered, overnight.

In a small saucepan, melt chocolate chips in cream over low heat, stirring constantly. Stir in coffee until dissolved. Spread the warm mixture over the cheesecake. Chill until serving time.