Walking while drunk can be dangerous on New Year’s 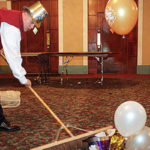 The risks of drunk driving are widely known, but drunk walking carries risks of its own. Experts urge New Year's Eve revelers to have a safe plan for getting home after the party ends. In this file photo, Sean Graves cleans up at the Eldridge Hotel after a New Year's Eve party.

We all know it’s a bad idea to become smashing drunk and then get behind the wheel of car.

But what about people who trade the keys in for a pair of shoes?

A 2005 study showed that New Year’s Day is the most dangerous day of the year for pedestrians. And alcohol has a lot to do with it.

The correlation between alcohol and pedestrian accidents isn’t just on New Year’s Day.

“When you are intoxicated, you are putting yourself at risk with anything you do, and walking is one of them,” said Jennifer Jordan, director of prevention at DCCCA Inc., Lawrence.

If you plan to drink, don’t drive. That’s the message the Kansas Highway Patrol is sending out to New Year’s Eve party goers. And it’s one they plan to back up with enforcement.

Last year, one person died in a alcohol-related crash over the New Year’s holiday. In all, the state saw 57 alcohol-related accidents during the holiday, 16 of them resulting in injuries.

Here are ways to make the new year a safe one:

• If you plan to drink, designate a non-drinking driver and give the person your keys.

• Never ride with a person who has been drinking.

• Take a list of phone numbers of cab companies or friends who you could call for a sober ride home. In Lawrence you can call Tipsy Taxi (842-TAXI), a free service from 11 p.m. to 3 a.m. on New Year’s Eve.

• If possible, plan to spend the night at the event.

• If you are throwing a party, have non-alcoholic beverages and never let a guest drive home drunk.

In the 2009 book “Super Freakonomics,” authors Steven Levitt and Stephen Dubner argued it was more dangerous to walk home drunk than drive home drunk — although they don’t recommend doing either.

Yes, more drunken drivers die every year than drunken walkers. But based on the ratio of miles driven drunk and miles walked drunk, and the number of deaths in each category, “on a per-mile basis, a drunk walker is eight times more likely to get killed than a drunk driver,” the authors argue.

The analysis comes with the major caveat that “a drunk walker isn’t likely to hurt or kill anyone other than her- or himself. That can’t be said of a drunk driver.” And the authors clearly state the safest choice would be to drink less or take a cab

But it highlights the dangers of what many consider to be the safer alternative.

Those who are intoxicated and decide not to drive home should be applauded, Jordan said.

“But walking home alone is a terrible idea when drinking, especially with the cold weather,” Jordan said.

People often underestimate just how far the walk is and can be unprepared for the winter weather. Dark streets and one too many drinks make it all too easy to trip over sidewalk cracks and curbs.

“You’re putting yourself at risk for other bad things to happen,” Jordan said of walking home alone.

Just like those who have to drive home, Jordan said party-goers should plan ahead if they want to walk home. Among the alternatives in Lawrence is the Tipsy Taxi, a free service that runs from 11 p.m. to 3 a.m. tonight and takes people safely to their homes. Those who want to use it should call 842-TAXI at least 45 minutes ahead of time.

Several pedestrian fatalities in Lawrence speak to the risks involved.

In 2008, a 56-year-old man was struck and killed by a motorcyclist while walking from east to west across Iowa Street near Chili’s Grill and Bar. Police reports showed the man was in the road illegally and under the influence of alcohol.

In 2004, a 20-year-old Wichita man was hit and killed while walking along U.S. Highway 24-40 Highway near Teepee Junction. He was attending a fraternity and sorority party at the junction and had a blood-alcohol level of 0.24.

In 1998, a Kansas University freshman was run over and killed by another KU student driving an SUV. The freshman had fallen down while walking across Tennessee Street. Both the students were found to be intoxicated.

In the past 10 years, Kansas University Hospital has seen two pedestrians hit on New Year’s Day and one on New Year’s Eve, according to Tracy Rogers-McDonald, trauma and burn program manager at the hospital.

The patients coming into KU Hospital, the regional hospital that takes some of Lawrence’s most severely injured accident victims, had knee injuries, broken bones, spinal injuries and head trauma.

Eight of the 331 patients treated in the past three years died.

In an email, Rogers noted that fatal pedestrian crashes occur most often between 6 p.m. and midnight and Friday and Saturday nights. And the accidents are likely to involve the use of alcohol, either by the driver, pedestrian or both.