Topeka ? Kansas Department of Social and Rehabilitation Services Secretary Robert Siedlecki Jr. likely will be remembered for angering thousands of Kansans in his short tenure. 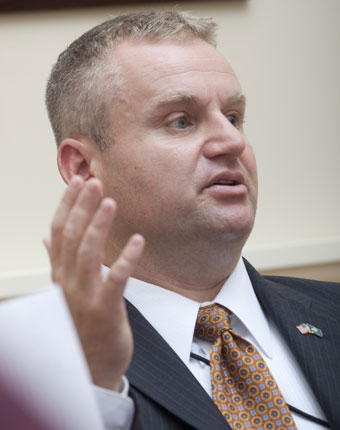 SRS Secretary Rob Siedlecki spoke with Lawrence Journal-World editors and reporters in this file photo from Monday, July 11, 2011. Siedlecki will be returning to Florida to take a state government position there and be closer to his family, Gov. Sam Brownback's office said Thursday.

On Thursday, Gov. Sam Brownback announced that his pick to run probably the most complex agency in state government was stepping down.

Brownback said Siedlecki was returning to his home state of Florida to take a state government job there and “be closer to his family.”

Just last month, Siedlecki, a Republican, in a testy exchange with a Republican legislator, said he had bought a house in Topeka and preferred to be called a Kansan.

The exchange occurred during a committee meeting in which legislators — Republican and Democratic — expressed frustration over a plan pushed by Siedlecki to move some juvenile justice functions over to SRS. They said the plan was hatched without having talked with anyone affected by it.

It was not the first time that kind of complaint was made by state officials about Siedlecki, who was the point-man for many controversial social welfare policies pursued by Brownback.

Prior to the three-day July 4th weekend, Siedlecki released a list of SRS offices targeted for closure, including the one in Lawrence.

Brownback and Siedlecki said the closures were needed to save money, and that those receiving services in Lawrence could go to offices in other cities. “Lawrence, in particular, has a proximity to several major SRS offices on four-lane roads,” Brownback said.

Local officials said many SRS recipients didn’t have transportation. The office closure would have wreaked havoc for thousands of people, strained social service agencies and endangered the public, they argued.

After weeks of negotiations, the city of Lawrence and Douglas County agreed to pay the rent for the SRS office and Brownback has since said he will seek to restore state funding next year.

The fight left a bad taste. Douglas County Commissioner Mike Gaughan, a Democrat, said of Siedlecki, “He spent his time here needlessly fixing things that weren’t broken, and he seemed determined to make it more difficult for Kansans who count on SRS to ever get in the door. SRS used to be focused on the people it served and its stakeholders, but he changed that culture from Day One, and now we don’t know who to trust.”

When Brownback came into office he picked Siedlecki, who had been chief of staff for the Florida Department of Health and had worked in the U.S. Justice and Health and Human Services departments under President George W. Bush.

Siedlecki went about reorganizing SRS and he touted marriage and faith-based initiatives.

But some legislators complained that Siedlecki brought in too many people from Florida who lacked Kansas experience.

In a prepared statement, Siedlecki said, “I promised Governor Brownback one year to transform SRS to make it more effective and efficient and that we have done so.”

He added, “We initiated an aggressive anti-fraud campaign, made adoption a priority, promoted work rather than dependence in our welfare programs, and laid the groundwork for a more child and family-focused department. Governor Brownback is a true statesman and I was honored to serve under him. While I am returning to my home state of Florida, Kansas and Kansans will have special places in my heart. Kansas hospitality is real.”

Brownback wished Siedlecki “continued success in all his future endeavors.” Siedlecki’s last day at SRS will be Dec. 31.

Brownback’s office said it didn’t know what job Siedlecki had taken “only that it’s in his area of expertise.” Brownback will name an acting secretary before the 2012 legislative session starts Jan. 9.

Senate Democratic Leader Anthony Hensley of Topeka was the one No vote when Siedlecki was confirmed by the Senate. He said the Brownback administration made a bad hire with Siedlecki. “They miscalculated, especially with the proposed Lawrence office closing,” he said.