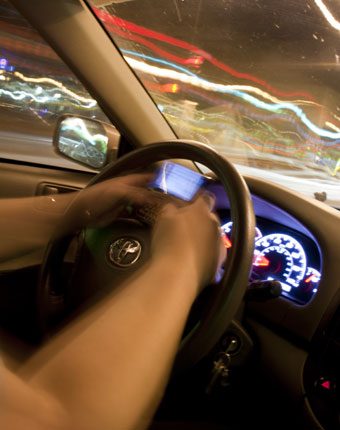 The federal National Transportation Safety Board recommended this week that cellphones be banned for drivers. It's a move praised by Paul Atchley, an associate professor of psychology at Kansas University. Kansas is one of 35 states to have banned texting and driving, but does not have laws regulating cellphone use while driving.

A Kansas University professor who has studied distracted driving praised the National Transportation Safety Board’s recommendation this week to ban cellphone use while driving.

The recommendation, which includes a ban on hands-free devices, is well-supported by research in the field, said Paul Atchley, a KU associate professor of psychology.

Atchley said many media reports focused on a double-fatality crash: an Aug. 5, 2010, accident near Gray Summit, Mo., involving a pickup truck, a tractor truck and two school buses. Besides the fatalities, including a 15-year-old, 38 were injured in the crash.

The 19-year-old pickup truck driver, who also died in the crash, sent and received 11 texts in the 11 minutes before the crash.

“Driving was not his only priority,” said Deborah Hersman, NTSB chairman. “No call, no text, no update is worth a human life.”

Kansas is one of 35 states with a ban on texting and driving, Atchley said, but doesn’t have any laws regulating cellphone use while driving. Nine states have such laws, he said, none of which bans hands-free devices. The United States as a whole lags behind countries with more restrictions on cellphones and other devices while driving.

Enforcement remains an issue, Atchley said, particularly through the courts.

Some areas, such as Chicago, have had success in law enforcement working with the courts to effectively enforce texting bans, but such cases are still rare, he said.

“Put it in the trunk,” Atchley said. “That’s what I tell my students to do.”

Material from The Associated Press was used in this report.