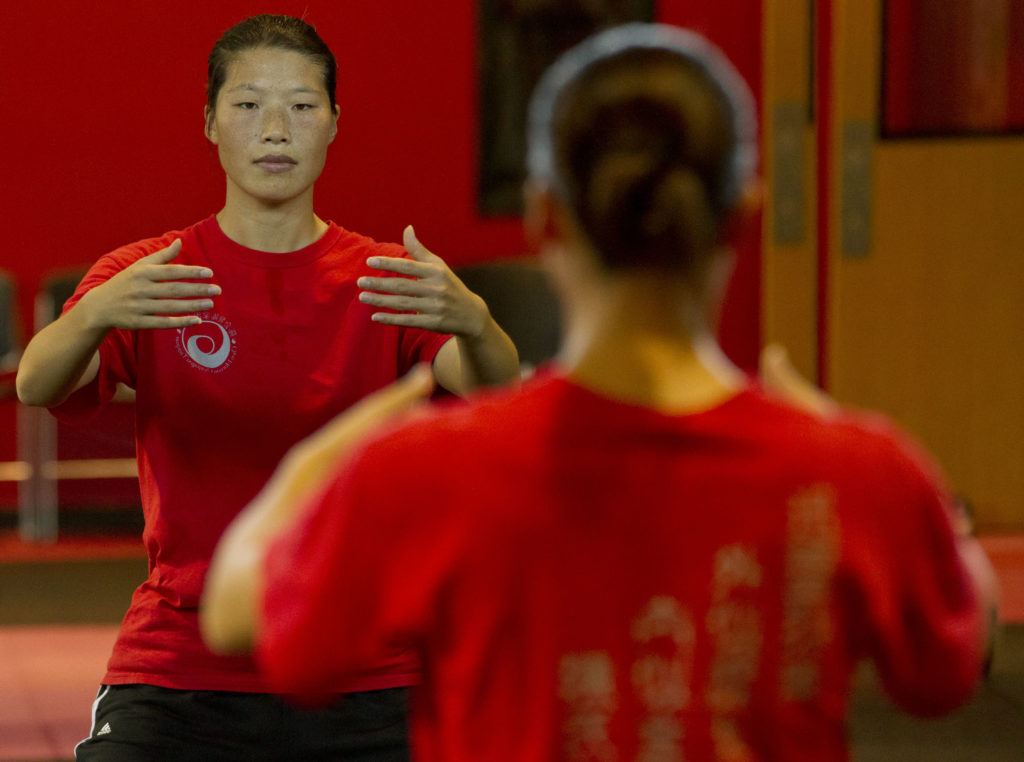 You know the stereotypes: outdoor scenes of classmates moving together in a slow-motion ballet; serene images used to sell pain relievers, insurance policies and vacation packages — and images that lead Americans to hold certain beliefs about the practice of tai chi.

“People in the West usually think (of) tai chi as just a health exercise for old people,” says Huixian Chen, who teaches a tai chi martial arts class Sunday afternoons in Lawrence. “But it is also an effective martial art that is fun for young people, too. In China, everyone knows that. I want more people in the West to know the real tai chi, too.” 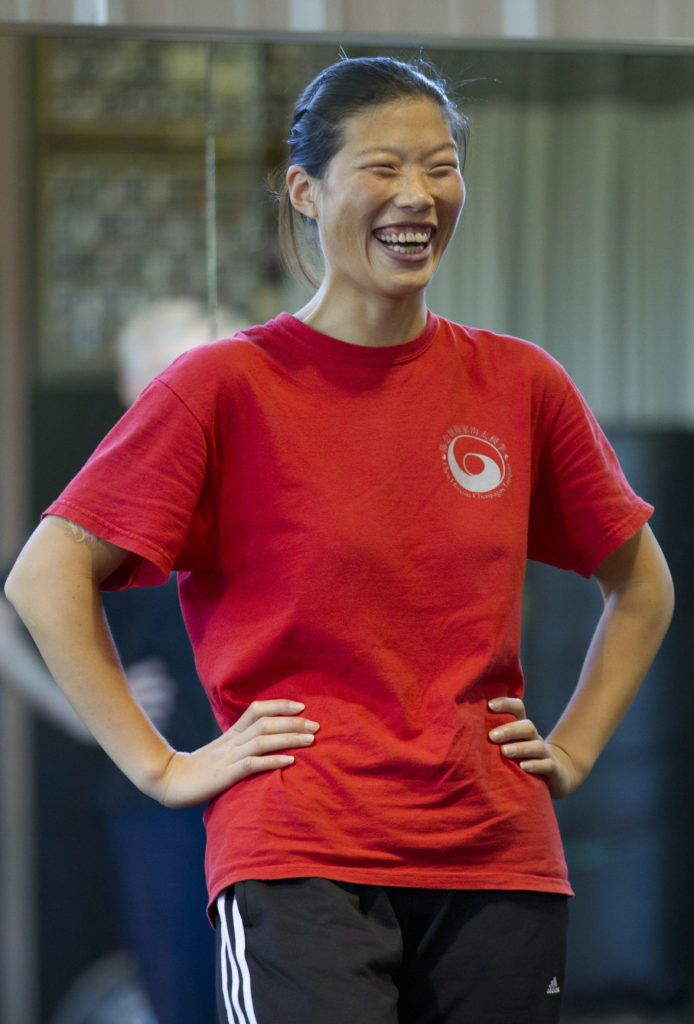 Chen Huixian stops for a moment to share a laugh with her class during a beginner tai chi class held at Premier Martial Arts Academy, 3201 Clinton Parkway. The classes, which began in May, are held twice a month, generally every other Sunday.

If anyone knows tai chi, or who has the credentials to teach it, it is Huixian Chen. 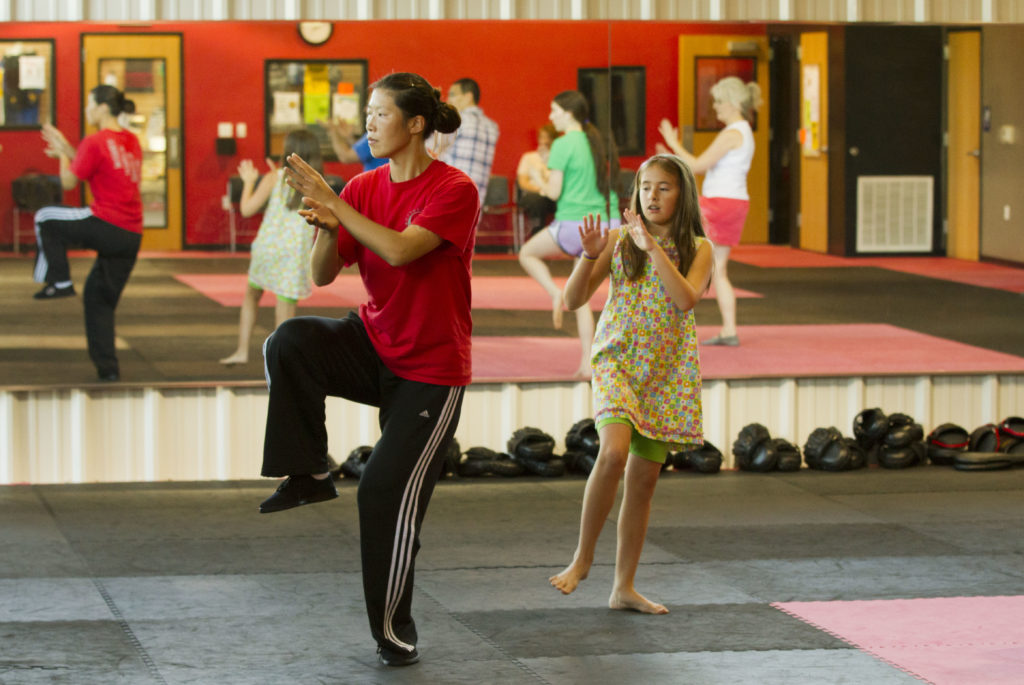 She is, after all, a direct descendent of Chen Wang-Ting, the man credited with developing tai chi in the 17th century in the Henan Province in China. “He had retired from the army and in his spare time put together a new martial art using the Chen family boxing routines together with his knowledge of Daoist philosophies of yin and yang balance,” says Huixian’s husband, Michael Chritton.

“In Chen tai chi, specifically, the movements alternate between slow and fast, hard and soft, opening and closing the body’s joints. This balance between polar opposites is the basis of Daoist yin yang theory,” Chritton says.

Tai chi remained within the Chen family and in Chen village as its secret martial arts system where, as Huixian says, “you’re either working in the fields or on your taiji (tai chi).”

Eventually the art form spread to other parts of China and across the world, making it to Roeland Park, where 20-year-old Chritton learned about it from a friend. His interest in tai chi led him to China in the summer of 2004, and although he went with the purpose of studying with Huixian’s uncle, Grandmaster Chen Zhenglei, it was Huixian who caught his eye. The two fell in love and carried on a long-distance courtship for a couple of years before he returned to ask her to marry him. They married on Valentine’s Day in 2009, and since then both have felt a responsibility to pass on the benefits of the practice to others, especially since Huixian knows how close tai chi came to being lost in to the people of China during the country’s Cultural Revolution.

Huixian’s grandfather, Grandmaster Chen Zhaopi, continued to teach tai chi, even after martial arts had been banned in his country.

“During the Cultural Revolution, Chen Zhaopi continued to teach,” Chritton says. “He was caught a few times and was persecuted and forced into public ‘struggle sessions’ (bound in shackles), meant to publicly embarrass and shame him and his family. Despite this persecution, he continued to teach the next generation secretly… If not for Chen Zhaopi, tai chi may have disappeared completely from the town where it was born.”

Tai chi enthusiasts believe that it works to strengthen an individual’s internal energy, (qi or chi).

“Tai chi seeks to open blockages in your ‘qi’ meridians (channels that carry qi throughout the body, much like arteries and veins carry blood),” Christton says. “A good analogy we like to use is a garden hose: If you kink the hose, the water will not flow through it. When correctly practiced, tai chi aligns your body in such a way that allows for the maximum flow of your qi energy through your body, ‘unkinking the hose’, if you will. If you sit at your desk all day long, your blood is not circulating to your feet and legs as well as it should. The same is true of your qi.”

One of those enthusiasts is Susan Chi, who was instrumental in getting Huixian to teach classes in Lawrence. Chi’s family had been interested in martial arts for years. Her husband, Tailin, had studied tai chi in the past and was interested in learning more.

“Last winter I ran into a friendly acquaintance of ours who told me about Huixian. He had taken a few classes with her, and given her background, we wanted to try it,” she says.

“We are lucky to have a lot of individual attention from Huixian,” Chi adds. “She is an excellent teacher and is great with kids. She often demonstrates for us the self defense concepts behind the traditional tai chi moves as she’s teaching them.”