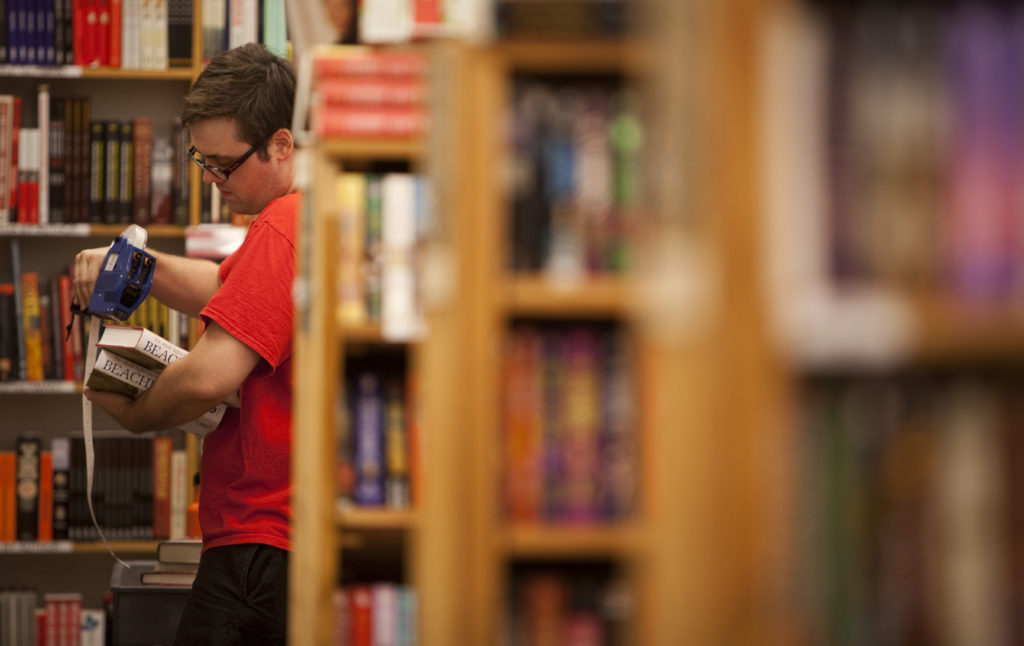 Ian Hrabe, a 2009 Kansas University graduate prices books at his job, Thursday, Aug. 11, 2011, at Half Price Books. Hrabe is one of many recent grads saddled with a large amount of debt from student loans and private loans. He estimates that he owes about 0,000.

Mark Kantrowitz, publisher of the websites finaid.org and fastweb.com, offered some advice on how to avoid massive student loan debts.

• Enroll in an in-state public college. The costs are much less than a private institution, he said.

• Save before college. Putting aside $200 per month for 10 years will shave off $396 from a monthly payment later.

• Keep living expenses in check. Just avoiding eating out, Kantrowitz said, can save thousands of dollars. If you’re paying for a meal plan, use it.

Ian Hrabe remembers the phone calls. They started cordially, but got nastier and nastier, until finally the student loan company was calling at 7 a.m., demanding payment on its loan.

National experts agree that people like Hrabe are among a new generation of college graduates having to deal with an increasing mound of debt resulting from decisions they made while in college.

Hrabe graduated from Kansas University in 2009 — “the year of the Great Recession,” he says — with a degree in English, with an emphasis on creative writing, and film studies.

He grew up in Olathe and went to college because he thought that’s what everyone did when they got out of high school, and he wanted to get out of his parents’ house.

“I’m going to go to L.A.; I’m going to make a movie. I’ll write the great American novel,” Hrabe remembered thinking when he entered school as a freshman. But halfway through, he had already soured on those ideas.

“I’m already half done,” he remembered thinking. “I might as well finish it out.”

He wound up working at CD Tradepost for minimum wage in Olathe for a while, as the movie and book career didn’t pan out. Today, he works at Half-Price Books in Lawrence.

It’s a good job, he said. It’s full-time, it has benefits, and he likes the company.

Today, Hrabe’s monthly payment on his loans is $560. His mother pays half of that, he said, to help him get by.

He’s doing well for now, and he has learned to be frugal. He’s engaged to his girlfriend, who’s going to graduate school to pursue a career in social work (she’ll be adding her own debt, Hrabe acknowledges).

Mark Kantrowitz, publisher of the websites finaid.org and fastweb.com, keeps track of data on student debt on the national level.

The average student who leaves college with student loan debts will have about $27,000 to repay, he said.

At KU, those figures are somewhat less, which would be expected at a public university with lower costs, especially for in-state students.

Just over half of KU undergraduates go through the university without loans.

But of the KU undergraduates who are left with student loans, the average principal is $20,517, according to figures from the university’s financial aid office.

And it’s all but impossible to get rid of student loan debts through bankruptcy — either federal loans or private ones, Kantrowitz said.

“You’re more likely to die in a car crash or die of cancer than you are to get your student loans discharged through bankruptcy,” he said.

The loan companies and the government will get their money one way or another, he said. Student loans recover more than 85 cents on the dollar for defaulted loans, a better rate than most private loans several times over, he said.

The level of debt taken on by students has been increasing over the decades, too, Kantrowitz said, as government and other aid for students hasn’t kept up with rising tuition costs.

Students often don’t realize that a dollar taken out in student loans today means a repayment of two dollars later, he said.

That $10 pizza might not look as appetizing, he said, if students thought of it as a $20 pizza.

And the increased debt load means more and more people are extending their student loan repayment plans for 20 years after they graduate.

“Then you’re paying back your own student loans when your children are going to college,” Kantrowitz said.

It’s certainly easy to acquire that kind of debt. Ora McWilliams, a KU doctoral student with more than $100,000 in student loan debt, remembered how he once was able to add $20,000 in more loans through an online process.

“My hand was shaking as I hit check out,” he said. “I kept thinking, ‘What if I hit the button twice?'”

Figuring it out in advance

Leticia Gradington knows that students don’t often understand the ramifications of their debt choices. As KU’s program director for its Student Money Management personal finance program, she deals with students looking for answers every day.

“You have students who think they know it,” she said. “They say, ‘I took Finance one-oh-whatever, and I know it.'”

Still, many of them don’t, she said. And their parents may not realize the ramifications of the debt their children are accumulating.

Gradington tells students they have to figure out the monthly payment on their loans while they’re in school. Call up their loan companies, she tells them. Figure it out. And, she said, students have to figure out what kind of salary they can expect to make before making choices on how much money to take out in loans.

Understanding the end at the beginning is critical, she said.

“If you understand, you don’t have to graduate from the school of hard knocks,” she said.

Not everyone has a horror story. Lucas Dunn, a communication studies major with a business minor, graduated last spring and found a job in Chicago as an account manager for CDW, an information technology solutions provider.

Still, he’s living with his parents for a while until he can find out how his budget will handle the monthly payment on his $25,000 college debt.

But for people like Hrabe, the future can look scary, and he admitted to sometimes hoping that a “wealthy widowed heiress” would swoop along and wipe his debt clean. He knows that’s not likely.

Hrabe said sometimes he wishes he would have foregone college. But there were some good things, too. He met his wife-to-be while in Lawrence and learned a lot working for the student radio station.

But still, he wishes he could have better navigated the traps and pitfalls.

“It’s my fault,” he said. “It’s a valuable lesson to learn. You’ve got to figure out something.”