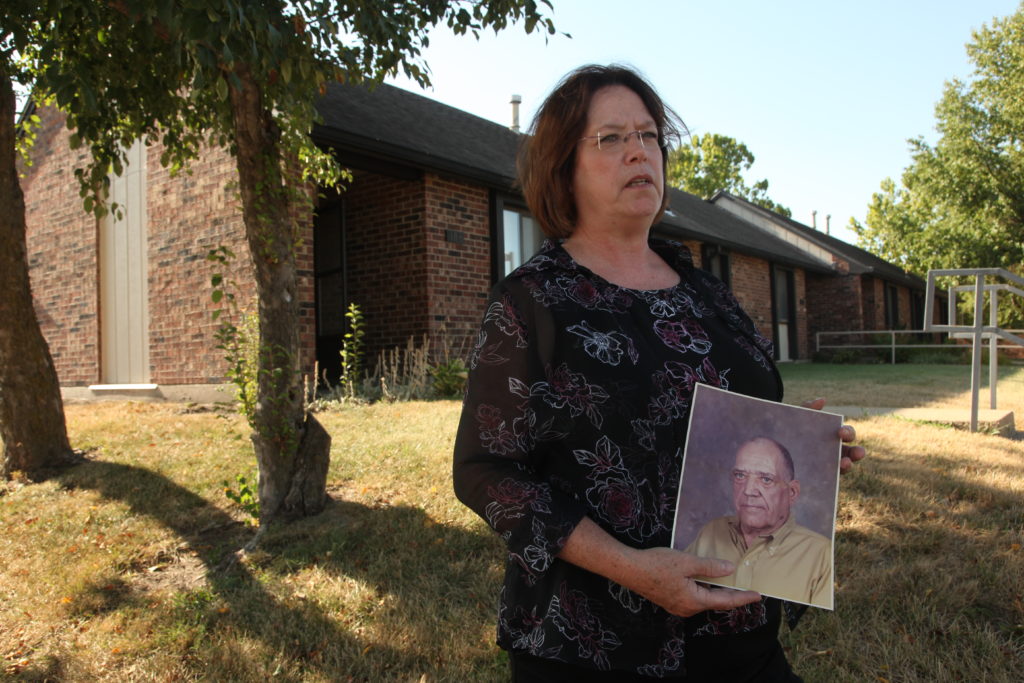 Katie Gillam stands in front of the Egdewood apartment where her father, Robert Conlin, was burglarized and beaten on May 21, 1977. Conlin, a local restaurateur died several days later, the beating having contributed to his death. The case has yet to be solved.

Police had an unnamed suspect in the 1977 home burglary and beating of Lawrence man and local restaurant owner Robert Conlin, who died days after the attack.

But more than 34 years later, the case remains unsolved.

As Gillam seeks justice, the case presents numerous challenges to prosecutors and police after more than three decades.

Conlin, who was 66 in May 1977, was sleeping on the couch of his Edgewood apartment on Haskell Avenue when a black male in his 20s broke in, beat Conlin with a broom handle, and stole a large color television and $2 in cash, according to media reports at the time.

Following the early-morning assault on May 21, Conlin — who for years had owned the Our Place Cafe in downtown Lawrence — drove himself to Lawrence Memorial Hospital. He collapsed in the emergency room.

The autopsy report cited the assault as a contributing factor in Conlin’s death — the beating caused several broken ribs and contusions on his head and all over his body. But Conlin also had advanced emphysema and heart disease, and the autopsy didn’t narrow the cause of death to one factor.

“Though numerous anatomic abnormalities were found, no one of them is considered, of itself, serious enough to have caused death,” reads the autopsy report, completed by Laurance W. Price.

Gillam — a legal secretary in Overland Park — said that during the five days of Conlin’s hospitalization, her father was confused and exhibited bizarre behaviors. He went in and out of consciousness. Gillam and her family, including her mother — Conlin’s ex-wife, now deceased — kept vigil at Conlin’s side.

But before his death, Conlin gave police a description of his attacker, and here’s where Gillam disputes police reports of the crime.

Gillam said her father told the family he was attacked by two black men, one tall and one shorter, contradicting police accounts that Conlin told police of only one attacker.

After Conlin’s death, police and the Douglas County Attorney at the time, current Douglas County District Court Judge Michael Malone, said there were leads in the case.

While the case had gone cold for several months, the investigation had picked up in October 1977 based on new information.

“We have a suspect in the case and his whereabouts are known,” said Malone — who declined an interview request for this article — in an Oct. 6, 1977, Journal-World article. “The man has been questioned and is to be questioned again.”

Media reports also state the Kansas Bureau of Investigation was involved, taking fingerprints and other physical evidence from Conlin’s apartment. But, “Our lab analyses have turned up nothing that would assist us in the case,” Malone said at the time.

Linda Durand, a KBI spokeswoman, said the evidence they tested was turned over to the Lawrence Police Department. The KBI had no other information to provide, she said.

A key piece of evidence — the stolen television — never turned up, according to police.

No arrests were made in the case, and police never publicly named any suspects.

In a prepared statement, Sgt. Matt Sarna of the Lawrence Police Department said last week that police were contacted by a family member about the case. Sarna said that because the case is so old, detectives are seeking the old case files. When that’s done, “detectives will review the information thoroughly,” Sarna said.

But even if a suspect were identified and arrested, there would remain a legal hurdle for prosecutors: While there is no statute of limitations on murder, there is a five-year limit on any of the other possible crimes a suspect could be charged with, such as burglary and manslaughter — meaning that prosecutors would need to prove murder, and not a lesser charge.

At the time, Malone was clear the case was considered a murder.

“We’re not considering filing less than felony murder charges because the facts of the situation show that was the crime committed,” Malone said in a June 21, 1977, Journal-World article.

‘It just gets shoved back’

Law enforcement officials have identified only one other unsolved murder case in the area, that of Nilsa Sanchez. Sanchez, 37 at the time of her murder in 1989, was found strangled, her body stuffed into a 36-inch-wide culvert under North 1400 Road near Stull. There have been no arrests in Sanchez’s case.

“These cold cases just go away,” McDonald said. But for the families of victims, “this is not an old case.”

Over the years, Gillam said, her family has heard nothing about any efforts to solve the crime.

“Nothing’s been told to us,” she said. “It just gets shoved back.”

But such cases do get solved, said McDonald, sometimes aided by the large time gap.

“There are people in the community who know what happened,” she said. And some of those people, with age and a guilty conscience, may decide to come forward with valuable information. “People change over time.”

The unsolved death of her father has troubled Gillam and her family over the years, and she said she’s ready to aggressively pursue it. Gillam and other supporters will hold a candlelight vigil in support of solving the case at 7 p.m. Aug. 18 in South Park.

“Who wouldn’t want a murder solved?” she said. “It’d mean everything (to me).”