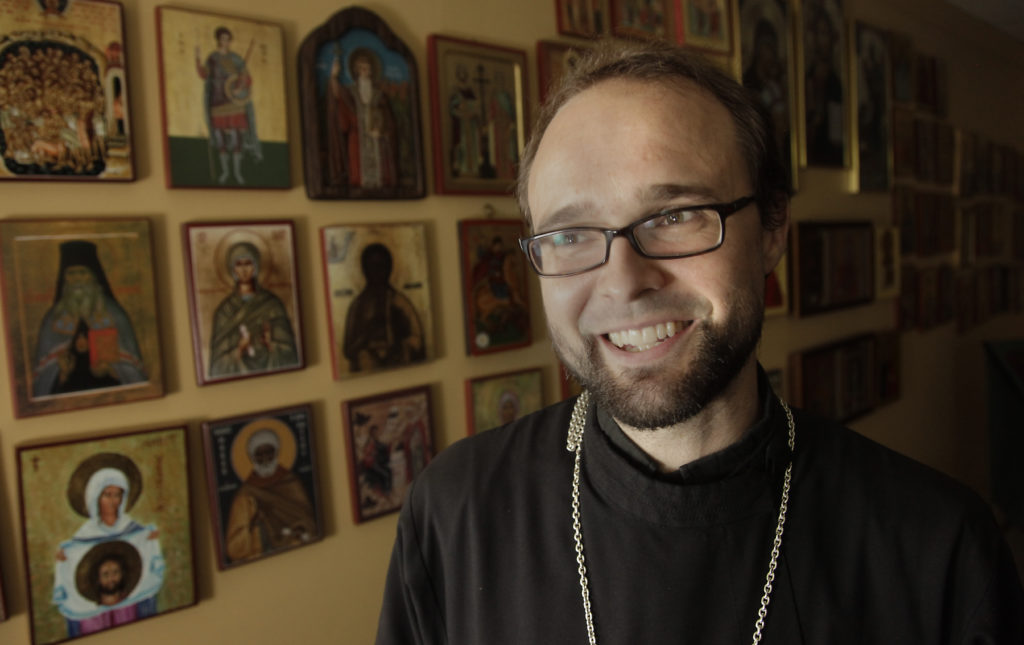 Joshua Lollar is the priest of St. Nicholas of Myra Orthodox Church in Lawrence.

Despite its odd location in a small commercial center next to a bar on Ninth Street, the St. Nicholas of Myra Orthodox Church isn’t out of the ordinary.

On Sundays, 35 to 50 people cram into the makeshift church to worship. Afterward, the congregation shares a meal.

They value community outreach, preparing food once a month for the LINK community kitchen.

It’s a tight-knit community. Many of the adults are close friends, and their children have grown up together.

Perhaps those bonds kept the church together during the last five years, when they did not have a full-time priest.

Out-of-town priests helped fill the void, but members said there was a noticeable difference. The church only held communion twice a month, and the community lacked the structure and leadership their own priest provided.

Nini Negash, a church member, used to drive an hour to Kansas City to attend a different church.

She doesn’t make that trip anymore. Joshua Lollar recently became the parish’s leader, eight years after he almost walked away from Christianity altogether.

Lollar grew up in a devout evangelical Christian home and was an active member of his church’s youth group.

“I didn’t really do any of the college rebellion stuff,” he said. “I was a pretty quiet kid.”

Instead of partying, he built a relationship with his future wife. Although he realized he wanted to become a pastor after a brief stint studying premedicine, he said he never honestly evaluated his faith.

“I was probably nervous about what would happen if I pushed too hard,” he said.

A mission trip to Ethiopia after graduation revealed the limitations of his world view, he said.

The poverty shocked him. He described the Sheraton Hotel — with a luxurious swimming pool, swank restaurants and rich tourists — in the midst of the impoverished city of Addis Ababa. He said the religion he was practicing didn’t fully embrace the Gospel’s critique of this inequality, and that bothered him.

He was also disillusioned with the “colonial” feeling of his work. Ethiopia has a rich Orthodox Christian tradition, yet he said many missionaries discounted it as a lesser form of Christianity.

“I just felt kind of ridiculous being the missionary over there,” he said. “I was like, ‘I need to learn from you all, not even about Christianity, but about living and being a human.'”

He left Ethiopia, unsure of Christianity. He came to Kansas University to study religion and philosophy, hoping to find truth in the process.

The lessons about Orthodox Christianity he had started in Ethiopia continued in Lawrence. The religion resonated with him, and he converted two years after his trip to Africa.

“I certainly needed discipline, and desired a deeper practice and desired a more serious and reverent way of worshipping,” he said.

He left Lawrence to continue his spiritual journey, attending a seminary in New York and earning a doctorate in theology at Notre Dame. In June, he became ordained and returned to Lawrence with his wife and four children.

Church members said they already have noticed the benefits of a full-time priest, such as having communion three times a week.

Chris Rathnel, a church member and a childhood friend of Lollar, was with him for a large part of Lollar’s journey. They both traveled to Ethiopia, and they became interested in the Orthodox church.

“It’s a gift to be able to see someone develop that way,” he said.