‘I do’ date: Lawrence couple royally excited for their wedding day 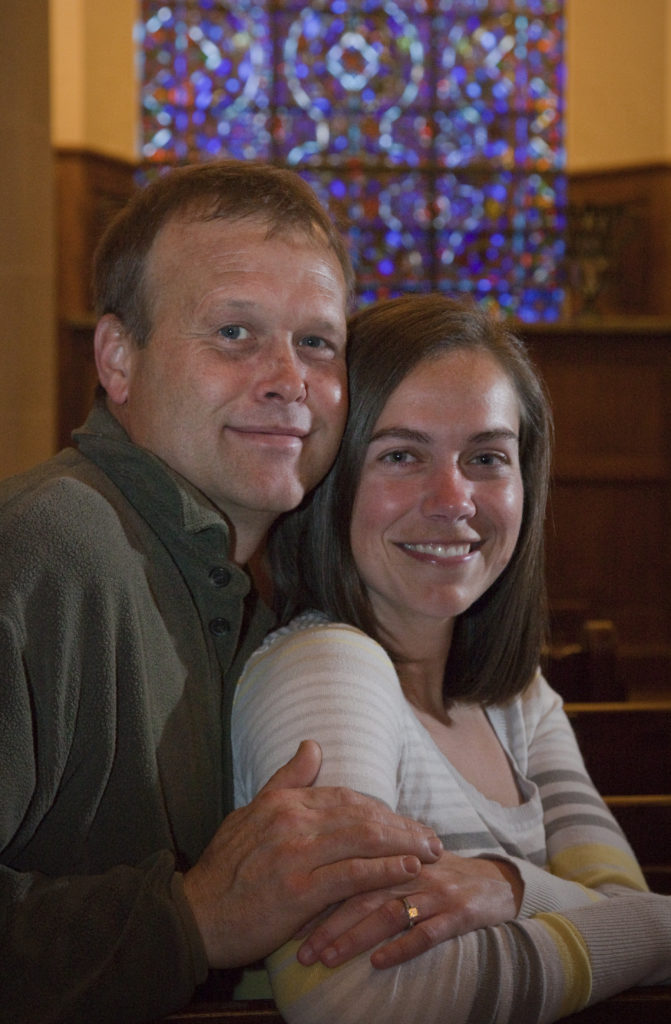 Ashley Catherine Goodin and her fiance Glenn Skulborstad will be married in the Danforth Chapel on the Kansas University campus April 29, 2011. When they planned their wedding, they had no idea that they would be married the same date as Prince William and Kate Middleton.

The bride’s got slick brown hair, big blue eyes and a wide smile that only grows brighter when looking up at her blond-haired hubby-to-be.

And today’s the day she’s becoming a wife.

But, no, she’s not who you’re thinking of, even if she does have the name “Catherine” on her marriage license.

Ashley Catherine Goodin is getting married today, walking down the aisle with a man who slipped her honker of a ring into a pint glass one night three years ago at the bar where they first met.

It’s a far cry from the other wedding story happening today half a world away in London, where Prince William made a princess out of Kate (Catherine) Middleton at Westminster Abbey. But it’s Goodin’s wedding story, and she doesn’t give a darn who else might have gotten married today.

And before you ask: She had the date first.

In fact, Goodin and fiance Glenn Skulborstad settled on April 29 more than a year ago.

They picked the date solely because it was after March Madness (they’re huge fans), before summer and it allowed them to score not only the church of their choice — Danforth Chapel on Kansas University’s campus — but also their reception venue of choice, The Oread, just down the street at 1200 Oread Ave.

Goodin, 27, and Skulborstad, 44, met on a night out five years ago at The Sandbar, 17 E. Eighth St. Skulborstad, a landlord, spotted Goodin and ended up scoring the KU senior’s phone number.

“She thought I was a lot younger,” he jokes, and admits that as a 16-year-old in 1981, he watched the broadcast of Prince William’s parents, Prince Charles and Princess Diana.

“Her long, long train. That’s what I remember, how young she looked and how old he was.”

His bride, of course, wasn’t born yet and has only seen that wedding on replay. Despite their age difference, they quickly figured out they were made for each other.

In 2008, Skulborstad proposed in the same place they met, dropping a white gold sparkler into a pint glass of Miller Light. Goodin smiles and teases him about that night: “You’re just sitting there waiting for me to finish it. Like, looking at me, I’m like, ‘What are you looking at me for?'”

Bob Goodin, Ashley’s dad, is more than happy to give away his only daughter, and says Ashley’s mother, Bonnie, who died of a stroke in 2004, would also be more than pleased.

“I know it’s been a little tough for her, not having her mom here because her mother would just be elated to be here for the wedding Friday,” says Bob Goodin, of Lansing, who plans to light a candle for Bonnie and talk about her during the celebration. “She’ll be watching down upon us and she’d be proud and happy for both of them.”

As they sit on the pews in Danforth Chapel, with the clock counting down to their big moment, this couple have nothing but love in their eyes — even if the world isn’t watching.

“Goin’ to the chapel and we’re gonna get married,” Skulborstad begins to sing as Goodin chuckles and leans into him. “She just wants to make sure that I’ll show up.