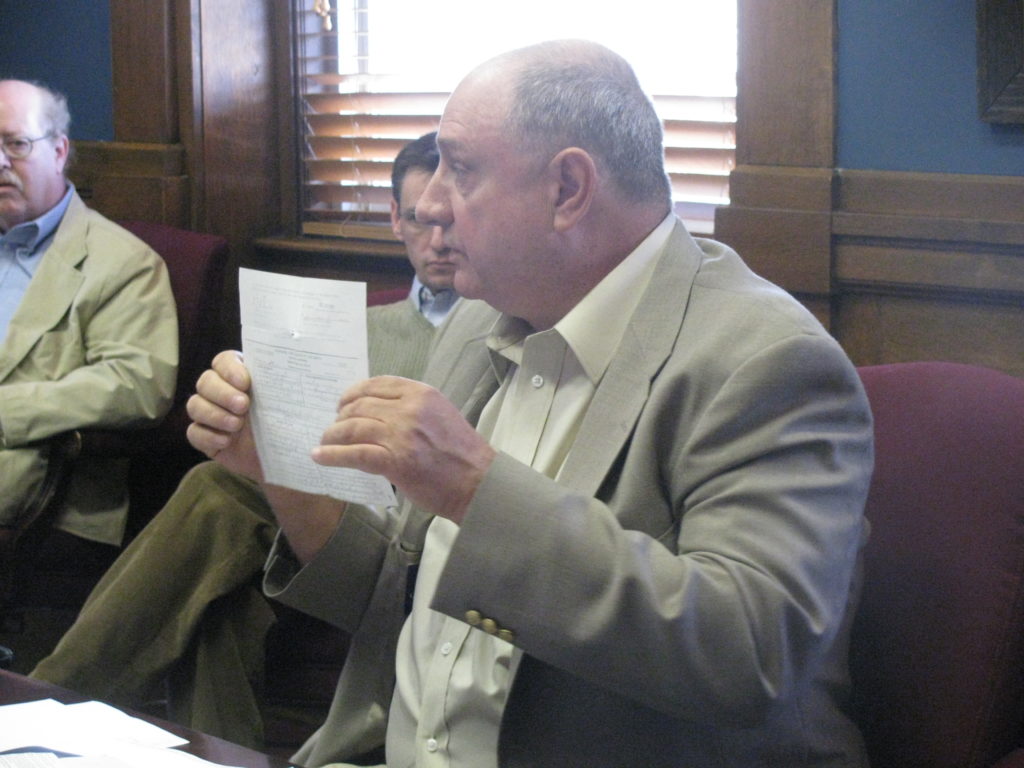 David Merton Shultz on Monday displays documents during a presentation before the State Objections Board in his petition to keep President Obama off the ballot in 2012. Shultz says Obama hasn't provided proof that he is a natural born U.S. citizen.

Topeka ? A Wichita man on Monday petitioned top state officials to keep President Barack Obama off the Kansas ballot in 2012, saying that the president wasn’t eligible for the office because he has failed to prove he was born in the United States.

“I’m saying that he (Obama) is going to file documents to be on the Kansas ballot. At the time, I would like the state of Kansas to be prepared,” said David Merton Shultz.

The State Objections Board rejected Shultz’s request by a 3-0 vote, with members agreeing that the petition was too early. Under state law, any challenge of a candidate being on the ballot must be made within three days of that candidate officially filing his or her candidacy in the state.

In Obama’s case, that likely won’t happen until after the September 2012 Democratic national Convention.

The Objections Board is composed of Secretary of State Kris Kobach, Attorney General Derek Schmidt and Lt. Gov. Jeff Colyer. Colyer was represented at Monday’s meeting by Caleb Stegall, who is Gov. Sam Brownback’s general counsel.

None of the board members, all Republicans, made any comments about Obama’s birth. No one from Obama’s campaign attended the meeting.

In 2010, Kobach said Obama would resolve questions about his citizenship by producing a detailed birth certificate. A year before that, he joked at a GOP barbecue that Obama and God shared something in common because neither has a birth certificate.

Shultz, 63, who described himself as a movie prop engineer, said he has done hundreds of hours of research and has concluded that Obama, a Democrat, hasn’t proved he was born in this country. That would make him ineligible to be president because the U.S. Constitution says only natural born citizens of the United States may be eligible for the office, he said.

Shultz questioned the validity of Obama’s certificate of live birth, and said Obama’s supporters have spent a lot of time and money to smear those who question where he was born as racists or so-called birthers.

State of Hawaii officials have affirmed that Obama’s original birth certificate is real and that the shorter certificate of live birth is the standard document given to any Hawaii resident who requests his or her birth certificate. Newspapers in Hawaii also published contemporaneous birth announcements for Barack Obama in August 1961, when the president was born.

But Shultz said it was peculiar that a “mulatto baby” was born and yet no one from the hospital remembers the occasion. “That was not a common occurrence. It would stick in someone’s mind,” he said.

Shultz said he would be back at the appropriate time to file a challenge, and asked that state officials pass a law similar to one considered in Arizona in which a candidate for president would be required to show proof of citizenship to get on the ballot. “I’m here to partner with you guys,” Shultz told members of the Objections Board.

But Stegall told him, “The task of this board is not to provide help with you coming back later.”

Kobach said Monday’s hearing was standard procedure when someone files a petition with the Objections Board.