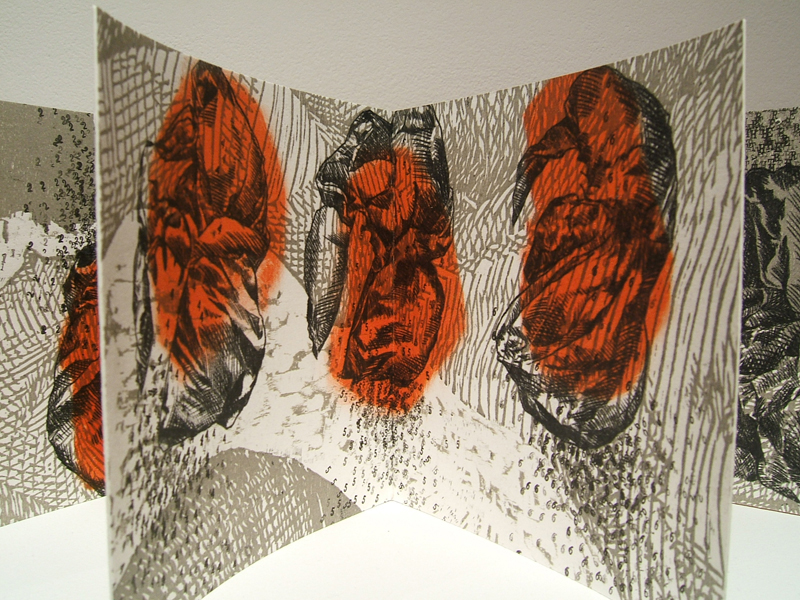 An example of work by Nicolette Ross, “ten seconds at a time,” 2009, unique artist book (detail). Ross is one of two artists in residence at the Lawrence Arts Center for 2010. 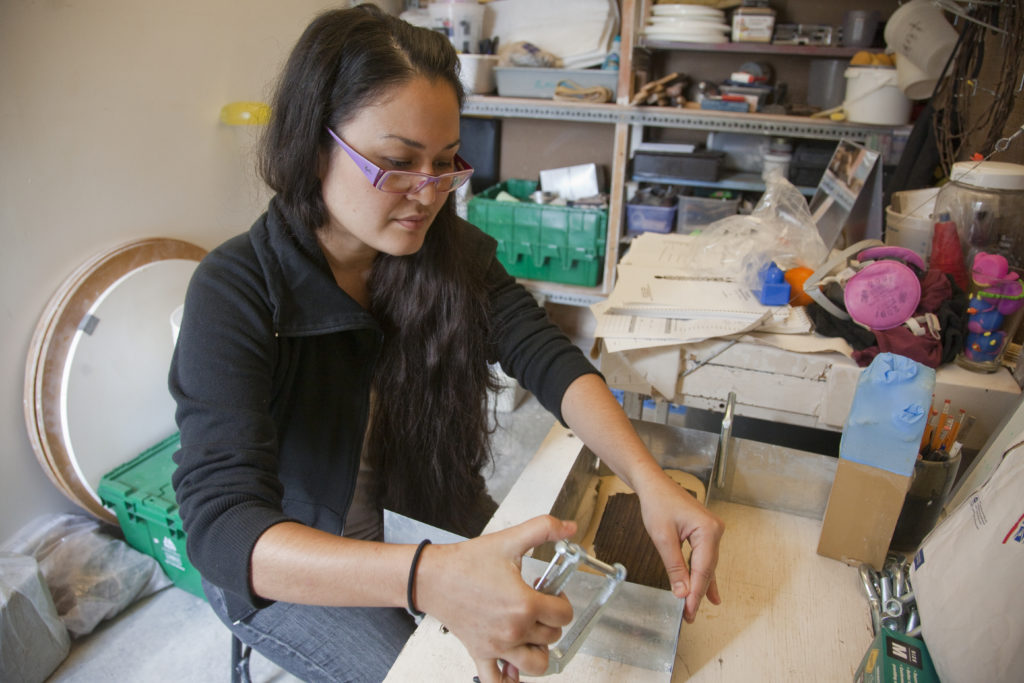 Sculptor Akiko Jackson is one of two Lawrence Arts Center artists-in-residence for 2010. Jackson will be teaching several classes at the center, as well as produce her own original works during her year-long residency. 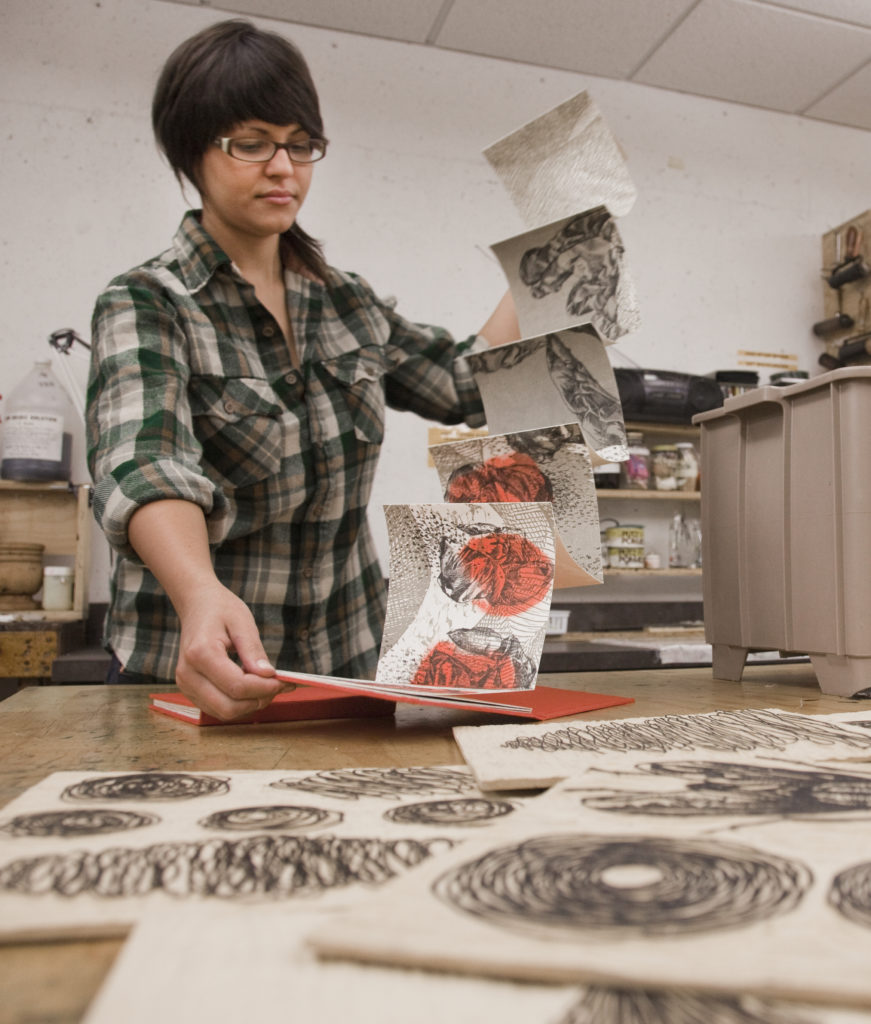 Print-maker Nicolette Ross is one of two new Lawrence Arts Center artists-in-residence this year. Ross hopes that while teaching classes about the old art form at the center, she'll inspire new print-makers. 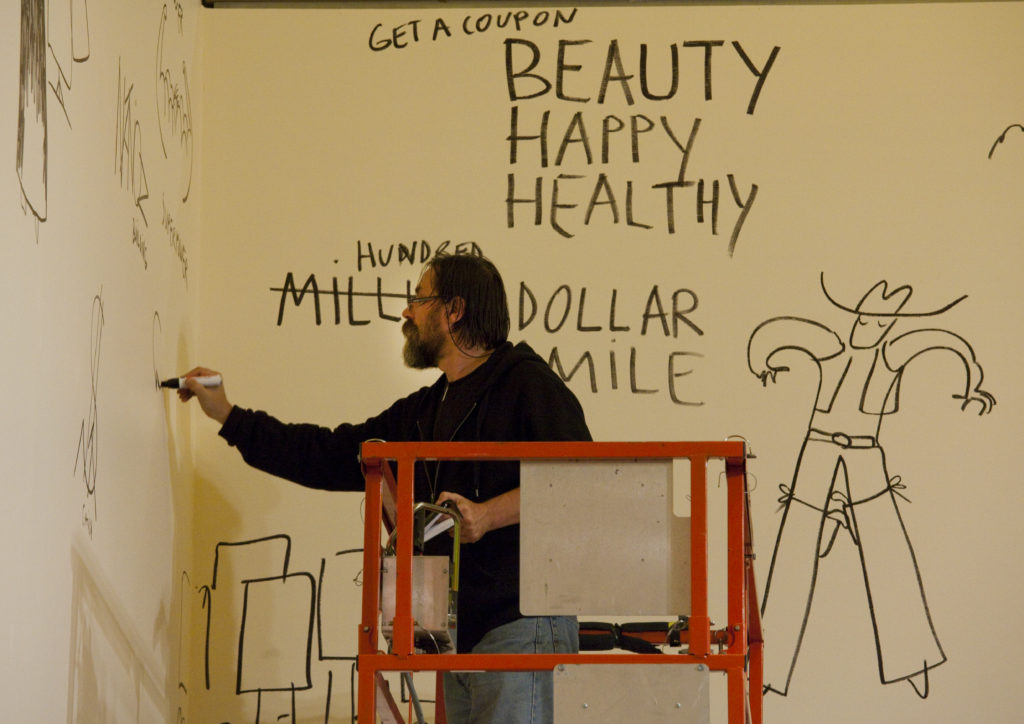 Romanian artist Dan Perjovschi is the fall artist-in-residence at the Spencer Museum of Art at Kansas University. He stands in a lift to reach the walls to create his works, which are done in black permanent marker directly on the museum's walls. The installation will be on display until Feb. 6.

Specializing in drawing, printmaking and sculpture, the artists-in-residence this fall at the Spencer Museum of Art and the Lawrence Arts Center cover a wide spectrum of skills, while all working toward the same goal: extracting a response that is both emotional and thoughtful from the viewer.

During the days of Communism in his home country of Romania, Perjovschi learned that if he was going to be an artist, he’d have to infuse humor into his work to avoid any creative backlash from the state.

Today, the humor remains, at least superficially, but the art has evolved to be political, social and economic writing on the wall. Literally.

Perjovschi, who has done installations throughout the Europe and the U.S., including the Museum of Modern Art in New York, uses permanent markers and blank walls to create his art — a series of cartoonish declarations about the world in which we live. At first glance, humor is apparent, but upon closer inspection it is clear the humor is a device to examine harsh realities.

“I learned to use it because I was under the dictatorship. Humor is one possibility to distance yourself from this very, very tough situation you can’t control,” says Perjovschi who grew up during the Ceausescu regime. “I look at the world now with a critical eye but also with kind of funny (eye). I work with stereotypes and the paradoxes which happen.”

At Kansas University’s Spencer Museum of Art, Perjovschi was given two weeks earlier this month and an entire room to create “Dan Perjovschi Central Court.” The finished product is a series of drawings covering topics including international politics, the Iraq War and even down-home items like KU’s Sept. 11 football victory over Georgia Tech and all the tailgating that went with it.

Perjovschi’s installation will be on display until Feb. 6.

Jackson’s sculptures have taken her from Hawaii to the West Coast to the East Coast and now to the center, as one of the Lawrence Arts Center’s artists-in-residence, along with print-maker Ross.

Along the way, she’s worked with everything from synthetic hair to clay formed into baby bottle nipples. It’s an unusual diversity of work, but it all has one goal: to inspire thought about how society views specific aspects of womanhood, including birth and beauty.

As part of her duties as artist in residence, Jackson will be teaching several classes for all age groups and is looking forward to interacting with her new community. She says she’s eager especially for one of the classes, in which she’ll focus on her particular aesthetic: the use of multiples to create a work.

“I love working with objects and finding an object that symbolizes something and then mass producing that and creating thousands of them. And then doing something in the space that can be emotionally overwhelming,” Jackson says. “And then that’s when I can really see what I was trying to do, because it exists in its own realm when it’s up.”

Fresh from finishing her master’s of fine arts at Washington University in St. Louis, Ross may seem young, but her art harkens to something very, very old.

Ross specializes in print making, using another old art form — wood cutting — to create her designs, which often explore the environment’s impact on our bodies. To do elicit the maximum response, she, like Jackson, likes to use multiples to design art that’s almost too much.

“It’s really just something I’m concentrating on, how I can turn environments into these stimulating adventures for people who come to the gallery,” Ross says.

She hopes that during her year-long stay in Lawrence, the center’s basement print-making room will be come as full and vibrant as the popular ceramics studio a couple of floors up. Not because she wants to create an army of print-makers, but because she wants everyone to find and follow their dreams.

“That’s the rewarding part, when you reach out to someone and they go, ‘Wow, you made a great choice in your life, you’re doing what you want to do,'” she says. “You see that look in some people’s eyes where they’re like, ‘Wow, why didn’t I follow my passions when I was your age?’ And that’s such a great feeling.”