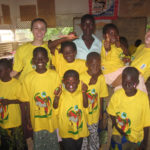 Maturo is shown with kids at Camp Hope, a yearly camp for children infected with AIDS.

To learn more, visit www.hthglobal.org or to donate

Taylor Maturo and her best friend shared clothes, just like best friends do. Maturo cooked for her friend, Eulalai, when she needed to eat, and cared for her when she was sick. The girls were inseparable.

Then, on World AIDS Day in 2009, Eulalai died from the disease the day was named after.

Maturo, a 25-year-old Lawrence resident, met Eulalai in Togo, where she went for a two-year Peace Corps assignment. Her experience in the country, which is roughly the size of West Virginia, was eye-opening. Men are more important than women, everyone eats unbalanced meals, but most of all, HIV and AIDS are a common problem. Maturo recently returned from her work overseas, time she knows will change her outlook on the United States.

Maturo went to Purdue with plans to go right to medical school, but those plans changed and she took a year after graduating in 2007 to apply for the Peace Corps. She chose West Africa as her region, got her first choice, and off she went, with no knowledge of French, the unifying language in the area, or Lamba, the language with no written version native to her assigned town.

Maturo’s family was wary of her going halfway around the world, but she dealt with it.

“They were scared because everyone has this really negative connotation of Africa,” she said. “I also had to get over my fears, too.”

Maturo arrived in Togo in June of 2008 and was placed in Kantè, a town of about 17,000 people. She was the only Peace Corps volunteer there.

Working with the locals

It was a normal day at work when a woman would come into Maturo’s HIV/AIDS foundation, wondering if her husband’s mysterious death had been caused by the deadly, but preventable, disease. Often the woman was already infected, and it became Maturo’s goal to save the children.

“I know I made a difference. It’s knowing you’ve saved kids’ lives,” she said. “When you’re in the health sector, it’s right in your face all the time.”

Maturo tested about 700 people for AIDS in her time in Togo but saw many others die or leave children orphaned from the disease.

The association put on a camp every year for children who were sick with AIDS, giving them as much food as they wanted, hosting a talent show and playing games. For kids who were already malnourished and sick, it was something to look forward to.

“It’s the best week of their life,” Maturo said.

Teaching people about healthy eating was Maturo’s other project, and she worked in a community garden teaching high school- and college-aged orphans about healthy farming practices.

“We were giving them a skill set,” she said. “In Togo, you’re something else, and you’re a farmer.”

An unsuspected hurdle the association faced was voodoo, which originated in southern Togo. Everyone believed in voodoo, sometimes in addition to Christianity, Islam or another religion.

“We would make mosquito repellant and it would work, but they would credit it to something else,” Maturo said. “A lot of times western medicine is viewed as the white man’s sorcery.”

Maxime became Maturo’s family in Togo. He was 2 years old when she got there and lived in the same multi-house compound as Maturo. She became a mother figure to him, but he also helped her feel at home.

“There was a child there who was my family, he was my heart,” she said. “If I had a bad day, he’d come curl up with me.”

Maturo lived without running water but was grateful to have electricity to run the fan in temperatures topping 100 degrees near the equator. Eating a healthy meal was another matter. Meals would be mostly starch, with a few bites of fried meat and vegetables in the sauce.

“If you have something healthy, they find a way to make it unhealthy,” she said.

Maturo can’t say if she’d want to go back to Togo now. Most of the people she knew wouldn’t be there now, and she wants to study for the MCATs so she can eventually join Doctors Without Borders. If she went, she’d want to stay for a long time, offsetting the cost of the expensive flight.

“It is kind of a selfish thing. You go and you’re noble, but you get so much in return,” she said.

Maturo is trying not to be critical of Americans after seeing how different life is in Africa. But first, she has to figure out how to live in the States and speak English every day.

“I have to learn how to be American again,” she said.