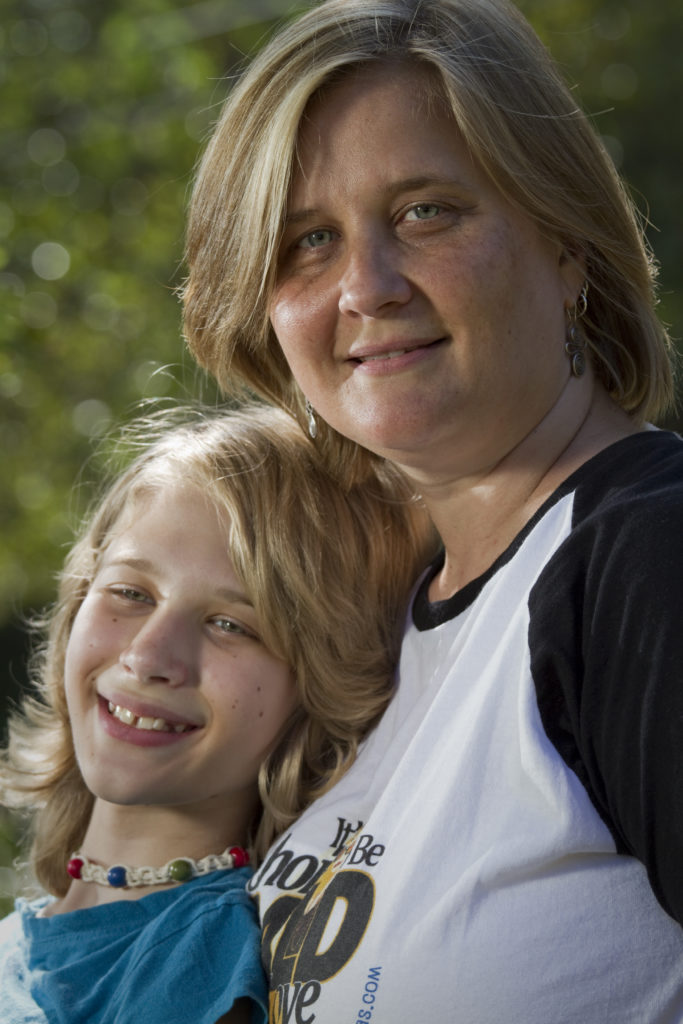 Karla Knudson, right, is getting her head shaved with 45 other women from around the country who also have kids who had cancer. Annika Kundson, 13, left, had Burkitt’s lymphoma but has been cancer-free for 14 months now.

Karla Knudson is about to hop on a plane and fly to Los Angeles to get a haircut. It’s not just any haircut, though. She’s shaving her head completely.

And Knudson’s new look isn’t about fashion, it’s about childhood cancer. Knudson, a 43-year-old Lawrence resident, is shaving her head in honor of her daughter, Annika, who was diagnosed with cancer in February 2009. Annika recovered, but thousands of children don’t, and Knudson wants people to know about it.

As part of 46 Mommas Shave for the Brave, 46 women from all over the country are shaving their heads in Hollywood to raise awareness. They have a goal of raising $1 million to donate to research and appearing on a telethon to help.

“I feel a responsibility to share and awareness I didn’t have myself,” Knudson said. “When you find out your kid has cancer, you don’t have people around who know what you’re talking about.”

Knudson found the women on the Internet, and the group formed a bond. Some had children who were survivors, such as Annika, 13, who was diagnosed with Stage 2 of Burkitt’s lymphoma after her parents thought she had the flu. The early diagnosis of a cancer that usually isn’t detected until Stage 4 meant Annika was declared cancer-free by May 2009.

Other children weren’t so lucky, and some mothers in the group lost their kids.

“That speaks to the randomness of childhood cancer,” Knudson said.

The women in the group, named for the 46 children who are diagnosed with cancer every weekday, found each other over the Internet. It’s the same place Knudson found help when she thought she might not be able to pay for a flight out to Los Angeles.

A Cincinnati woman she’d never met volunteered her frequent flier miles to pay for the trip. That woman, Jamie Landheer, met a family two years ago whose daughter died from neuroblastoma. After becoming close to the family, she knew she had to help.

“As a mom, as a human being, I just can’t sit back and do nothing,” she said.

Landheer earns frequent flyer miles as an executive, and Knudson is now one of about 25 people Landheer has used her miles to help.

“I always say I’m not the hero,” she said. “I just happen to be the person who can, but anybody can do a little bit.”

Knudson flies out to Los Angeles early today, and by evening, she’ll be a bald-headed beauty. It’s an idea her daughter was not OK with at first.

Three days after shaving her head with 45 other women in Hollywood, they will appear on the Stand Up 2 Cancer telethon. The telethon will air at 7 p.m. Friday on several networks, including CBS, NBC, ABC and Fox.

Knudson admits she’s surprised she plans to shave her head, and the idea of raising thousands of dollars is daunting. But she knows the cause is important, and having her daughter, son and husband healthy is priceless.

“It does make you realize when stuff gets harder, it could be so much harder,” she said. “All I want is to keep holding my kids’ hands and my husband’s hands.”