LIbrary fills many roles for many people 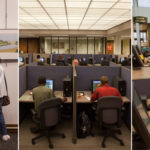 Scenes from Lawrence Public Library, 707 Vt., from left: Waverunners Club at the library offers children from ages 7 to 11 to learn about artwork from the Spencer Museum of Art at Kansas University; the computer lab area located downstairs at the library contains 50 computers, and patrons are limited to two one-hour sessions per day; Seth Outcalt, of Lawrence, scans some books he was checking out using the library’s express checkout counters in this Journal-World file photo.

Jane Johnston’s voice already is blooming like a flower as she dives into today’s subject.

“Let’s talk about bears,” Johnston says from the front of the room.

Rectangular carpet mats are laid out in a semi-circle on the worn auditorium flooring, and there are about 20 kids and at least a dozen parents sitting around Johnston and her books and puppets. But there’s room for another, she motions to the father. He points to the baby in the stroller and then shakes his head like a dog trying to flick a flea from its ear.

Instead, he pulls a mat back farther from the crowd and taps it with his hand. His toddler son does not get the hint to sit down but rather taps his feet in some sort of happy dance, even though there’s no music.

The music had been just a few minutes earlier. “Storytime, storytime, come and share a story time. Look at books, listen well to the stories we will tell.”

Apparently, the music lives on in the toddler’s soul. It must be contagious, as a few others around the half-circle begin to stir. Johnston, her voice still coming across like a daffodil in April, says to the children, “Oh, are you watching? Did you see that bear go by?”

Perhaps the infant in the stroller did. Regardless, she has something to say and lets it out with a wail. The father searches a bag for a bottle, scoops up the baby and begins to do his own swaying-sort of dance without music.

Johnston continues unfazed. A stirring baby in storytime is like the sounds of crickets on a summer evening. No one really minds.

But the father does, as the baby bottle doesn’t have the effect he hoped. He slips out with baby into the lobby. His son, junior Fred Astaire, continues to dance for a moment until he realizes his biggest fan has left.

So a moment later, father, baby, bag, bottle and toddler — hugging father’s leg — all stand in the library lobby.

Don’t tell this guy that it is just another quiet day at the library.

Leaders of the Lawrence Public Library, 707 Vt., have been trying to get that message across for some time now. As voters prepare to go to the polls on Nov. 2 to determine the outcome of an $18 million bond issue for the library, leaders have been emphasizing that the idea of a stoic, slow-paced library is but a memory from a Jane Austen novel.

• 96,018 separate transactions at the reference department were filled, up 3 percent.

• 535 public meetings — events not put on by the library — took place in the library’s auditorium and gallery space.

• And use of the library’s 50 public computers has grown to the point that users are limited to two one-hour sessions per day to cut down on wait times.

For $18 million, library leaders are proposing a project that would add 20,000 square feet onto the library at Seventh and Vermont streets, and would renovate the remainder of the library. Children’s space and meeting rooms would double. A new parking garage with 250 spaces would be built in the existing parking lot, and 100 computers and a drive-through book lane would be added.

Muriel Green and her co-workers in the circulation department shake about 3,000 hands per day.

About 3,000 books get returned to the library each day, and each and every one of them gets touched by someone in the circulation department. No, bringing up the oddity of bathroom reading does not seem like a good idea. Yes, hand sanitizer is on nearly every desk.

In the meantime, there is one advantage to all the handling.

“One of the cooler things is you do get to see all the odd titles,” said Green, as a book, “62 Projects to Make with a Dead Computer,” sits nearby. “I probably check out one or two books per week just because I’m curious.”

Some library employees shake hands in a more traditional way. Library employee Gregor Brune is the center of attention at least seven times per week. Brune, the library’s book van coordinator, brings a mini-library to seven Lawrence retirement communities each week. For an hour, he sits and talks with patrons about everything from “In Cold Blood” (“Informative but not particularly enjoyable,” was the review from one patron.) to the disposition of a friend’s cat (still fat and sassy).

A rush of business begins soon after he wheels his cart in from the parking lot and sets it up in the community room of Vermont Towers. Men and women come down and get handfuls of books and movies.

“One of the most rewarding parts of this job is how much you’re appreciated,” Brune said.

And some library employees don’t shake hands but do shake free information and even memories.

At the reference desk, the questions can be almost anything. Do you have a copy of People, the magazine that is not kept out on the shelves because it tends to walk away? Do you have a phone number for a domestic abuse center? Do you have the Batman CD that has this song on it, not that one? A quick check of Amazon.com determines the title of the CD. The library doesn’t have it, but through interlibrary loan they can get it in about a week.

You never know what question lurks around the corner.

“We had a guy the other day who was working on his memoirs and wanted to know the name of a burger joint he stopped at in Lawrence in 1969,” said Rachel Smalter Hall, a reference assistant. “We went to the 1969 Polk directory and we found it. That was kind of fun.”

Somewhere in the public library’s collection, there’s a book on fortune tellers. Some library supporters may soon be checking it out.

Talking with several library patrons about the proposed expansion and the upcoming vote, a sense of uncertainty was clear.

Lawrence resident Dean Owens said he thought the library expansion was badly needed. He listed most of the reasons library leaders have been espousing — a need for more computers and more children’s space in particular.

“I’m hopeful, but I’m not overly optimistic,” Owens said. “I think a great number of people just don’t want their real property taxes to increase to pay for it.”

The financial issue is creating uncertainty with some voters. Of about a dozen random people interviewed — both at the library and at locations away from the library — nobody flatly rejected the idea of the expansion (although some Vote No on the Library signs started to show up in yards this week). But several voters said they hadn’t yet made up their minds.

“The word I would give you is skeptical,” said Wayne Kick. “I’m not sure we need to spend that kind of money on it. It seems like it is good library already.”

Supporters of the project, though, are betting that Lawrence voters find a way to overcome their concerns about an ailing economy.

“If we don’t do this now, I think in about 10 years, we’ll regret it,” said Valerie Unruh, who said she sometimes goes to Topeka to use the library there. “I feel like if we keep waiting for times to get better, we’re just going to be pushing it off and pushing it off. I think we should just treat it like taking off a Band-Aid — just rip it off and be done with it.”