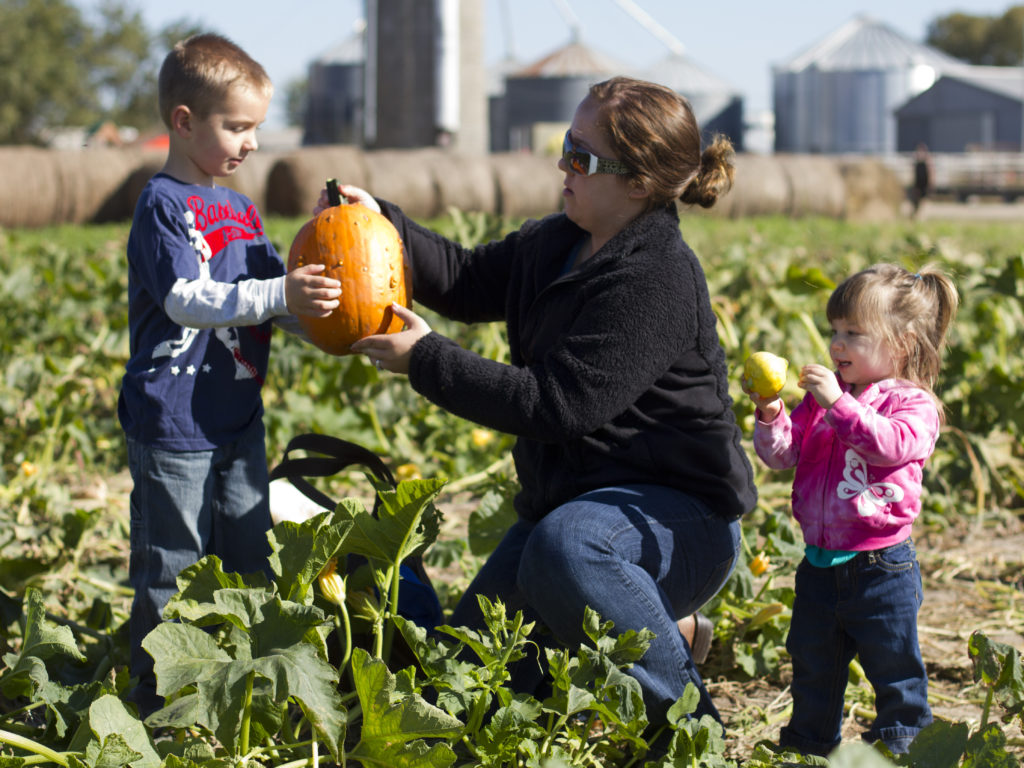 It’s a giant metal trough filled with thousands of corn kernels. It seems silly, childish, but kids and adults love it alike. They get in, sit down and relax, sinking into the kernels. 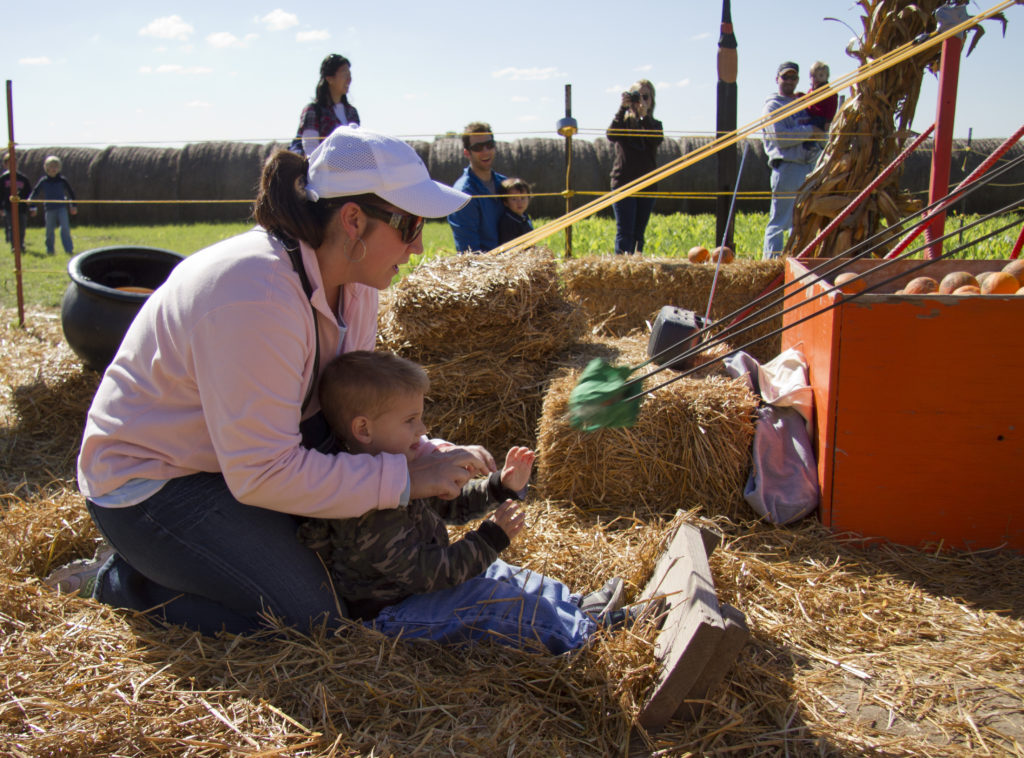 Carrie Thomas helps her son Jace Thomas, 8, Lawrence, launch a pumpkin into the air with the pumpkin sling shot at Schaake’s Pumpkin Patch, 1791 N. 1500 Road. Targets are set up down range, and anyone hitting a target wins a free ticket to the concession stand. 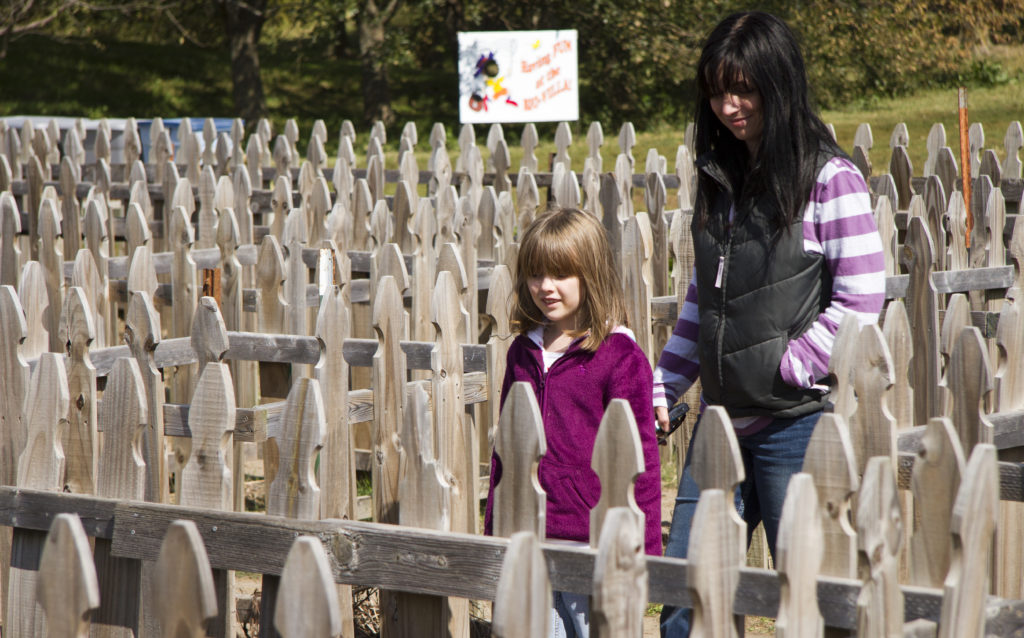 Aidan Lynch, 8, Lawrence, leads her mother, Julie Morris, through the right-hand-turn-only maze at Pendleton’s Country Market, 1446 E. 1850 Road. Aside from a pumpkin patch, customers can enjoy the maze, pumpkin sling shots, a tub filled with corn kernels and a butterfly house. 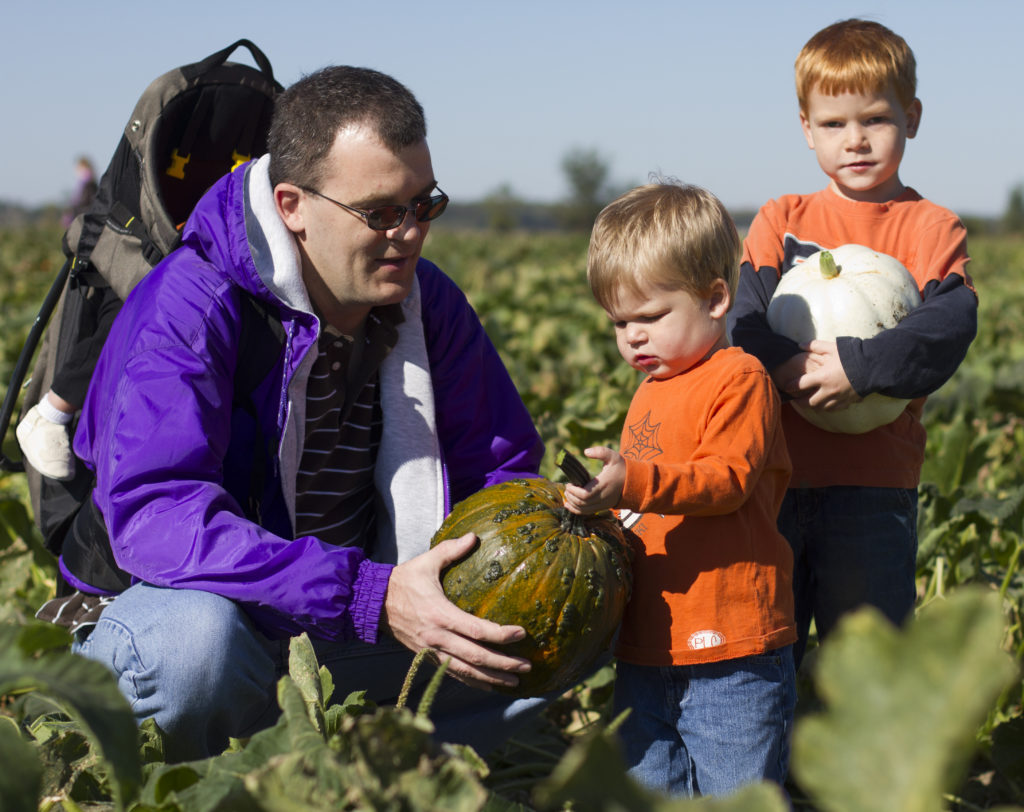 Where is this new version of the sandbox? At Pendleton’s Country Market, a popular destination for picking pumpkins. But the attraction isn’t limited to the orange gourds.

“We found that the simplest stuff is what people like most,” says Karen Pendleton, market owner.

For two local pumpkin patches, they keep the traditional fall experience basic — pumpkins, family attractions and a little education thrown in. They leave out the scarier and more commercial attractions.

“We’re more of a fall destination and not a haunted Halloween place,” Pendleton says.

Her farm has a small pumpkin patch, one a friend calls a boutique patch. But a trip to the patch can mean so much more.

Kids can play in the corn box, ride through the tricycle track, fire pumpkins at targets on the slingshot or learn about local insects in the butterfly garden. Adults often join children making their way through the right-turn-only maze or around bonfires.

Pendleton wants the experience to be fun, but she wants people to know how a farm operates as well.

“A pumpkin patch is one way people get to a farm,” she says. “I think all of us in this area try to be real. We’re all interested in having people identify with what happens on a farm.”

About a mile away, a preschool teacher is at Schaake’s Pumpkin Patch, preparing for her annual visit with her class. Marilyn Ryun, Stilwell resident, has been visiting the patch for 23 years, traveling more than 40 miles just to go to what she says is the best place for pumpkins.

“My kids love it,” she says. “Parents are happy to come out here.”

Just like Pendleton’s Market, Schaake’s is a family operation that also grows other crops during the year: corn and soybeans. The whole family comes out to help with the 25-acre pumpkin patch, which owner Janet Schaake says the family never expected to grow so large.

“Never, ever did we expect it to get to this volume,” she says.

Schaake’s farm offers 72 varieties of pumpkins, and about half the pumpkins in the patch are specialty. Schaake says one of the best parts about coming to the farm is the real-life experience of the patch.

“Mainly we’re hoping to show how a working farm goes,” she says. “You actually pick it off the vine. We try to keep it as natural as possible.”

On the way to the patch, visitors can also find their way through a hay bale maze or shoot pumpkins from the slingshot. And when they’ve found their perfect jack-o-lantern, they get to put them in a wheelbarrow and weigh them on a giant scale.

Education is the other focus of the patch, and during the main pumpkin-picking weeks, classes from area schools will go through the patch every 20 minutes. The kids learn about how pumpkins grow, how they have male and female flowers and finally get to pick out their own pumpkins. For some, they’re starting a tradition for years to come.

“So many people came out when they were children, and now they’re bringing their children,” Schaake says.