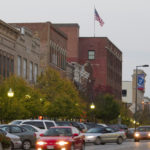 Downtown Lawrence merchants are hatching a plan to help rid Massachusetts Street of panhandlers. A new program will hand out educational resources listing social service agencies to downtown visitors, designed to discourage them from giving out money.

From its historic haunts to the honk for hemp guy, Massachusetts Street is just right, according to the country’s largest group of planners.

The American Planning Association today named Massachusetts Street as one of the 10 best streets in the nation for 2010.

City leaders said the designation confirms what they’ve been pretty certain of: Downtown Lawrence is on the right path.

“I’ve always said Massachusetts Street is the greatest street in America, but part of that is because it has my business on it and a lot of friends,” said Mayor Mike Amyx, who owns a downtown barber shop. “It really is our town square. It represents our community and what it believes.”

The planning association highlighted the street’s historic architecture and art, but also made special mention of political efforts to ensure that downtown has remained vibrant.

“An unsuccessful court challenge in the 1980s by developers wishing to build nearby retail malls confirmed the importance comprehensive plans play in helping protect established downtowns and their businesses,” said Paul Farmer, chief executive of APA.

“I think one of the most important aspects to keeping a downtown healthy is the community and political will to put a lot of effort into it,” McCullough said. “I think people sometimes think downtown happens by accident. It doesn’t.”

Jane Pennington, director of Downtown Lawrence Inc., said the designation is the type of recognition that can help in marketing efforts. APA has only been naming “great streets” since 2007, meaning that only 39 other streets in the country can claim the title.

“This designation reinforces what we try to highlight to visitors and residents,” Pennington said. “Coming to Massachusetts Street is like stepping back in time in a lot of ways. Just the whole atmosphere is warm and inviting. It is very historic, and there’s a lot of character.”

“You look at what we have today with downtown, I think one thing you can definitely say is that the decisions this community made in the past were right,” Amyx said.

The president of the APA, Bruce Knight, will be in Lawrence at 6 p.m. Oct. 29 to make formal presentation of the award. The presentation will be part of downtown’s Final Fridays art event.