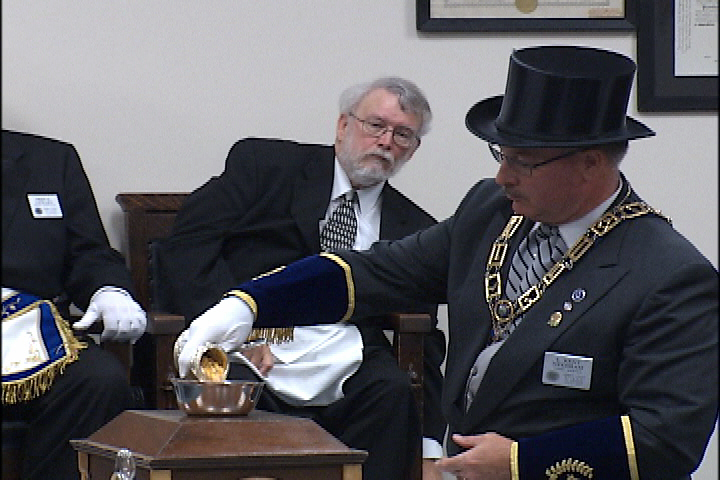 Grand Master Kent Needham pours the “corn of nourishment” during the dedication of the new Lawrence Masonic Center on Sunday. The ceremony dates back to the time of America’s Founding Fathers.

Where once was a swimming pool for a local diving club is now a building dedicated to serving the community.

On Sunday members of the Masons of Kansas gathered to dedicate the new Lawrence Masonic Center, 1305 E. 25th St. The centuries-old ceremonial tradition included the laying of the building’s cornerstone.

“The purpose is to dedicate the building to the purposes of Masonry, which are those things that which are effectively trying to make the world a better place through being moral, upright, patriotic, service to mankind, service to our families and to our communities,” said Jon Woodward, Mason and CEO of the Lawrence Scottish Rite.

The ceremonial aspect dates back to the time of George Washington. America’s first president was a Mason and laid the cornerstone of the nation’s Capitol in 1793. “By maintaining tradition we maintain our roots, our heritage, our character for trying to be better and upright people,” said Woodward.

Members dressed in full Mason regalia used the ancient tools of their trade — the square, the level and the plumb — to check the integrity of the stone. In keeping with tradition the group buried letters, photos and other keepsakes in a time capsule underneath the stone.

“Someone 50 to 100 years from now will look back and have a better understanding of what is going on within the Masonic community,” said Grand Master Kent Needham, head of the Masons of Kansas.

The building will be used as a meeting place and as a base of operations for the Mason’s many charitable functions, like their annual Thanksgiving dinner for the Boys and Girls Club. Members said serving the community is an essential part of the group’s work, but Needham said its purpose as a fraternal organization goes deeper.

“Really what we’re about is teaching better ways of living moral, keeping morally upright standards to our lives.”

The Masons left their temple in downtown Lawrence in 2003.