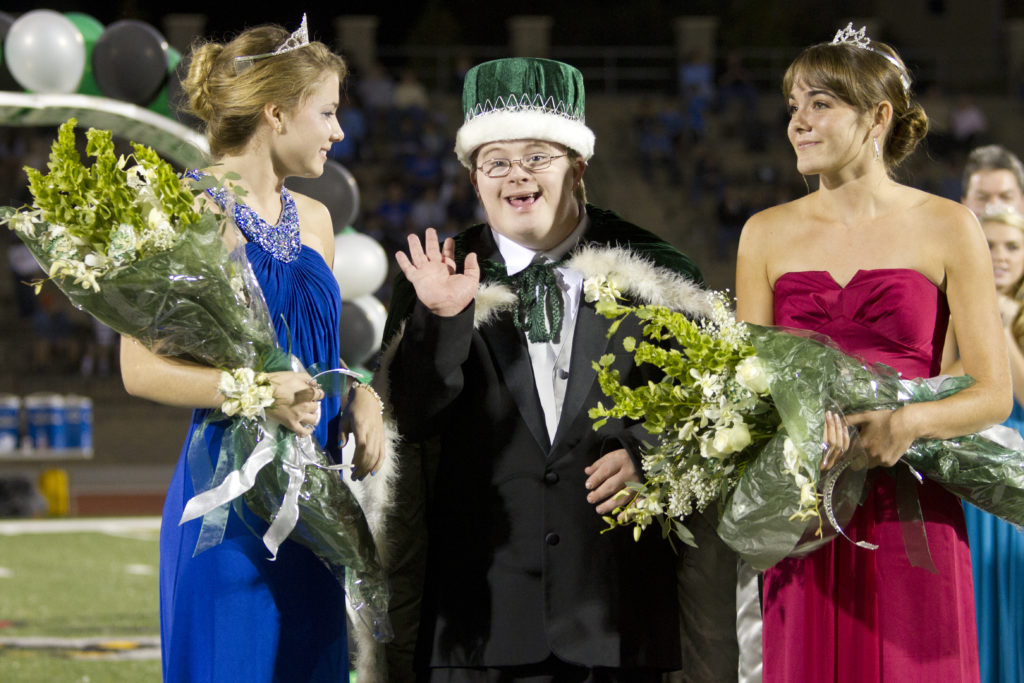 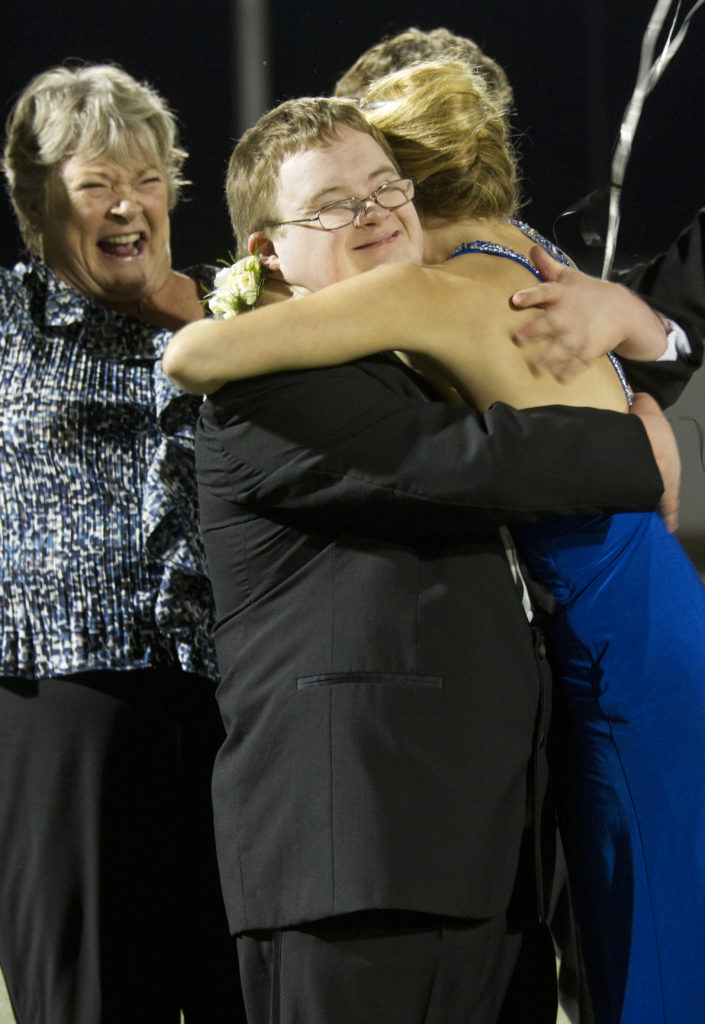 Owen Phariss recieves a hug from Audrey Hughes as his mother, Nancy Holmes celebrates, after Phariss was named homcoming king Friday night during halftime of the Free State football game against Shawnee Mission East. Hughes played a huge role in getting Phariss on the ballot for homecoming king. 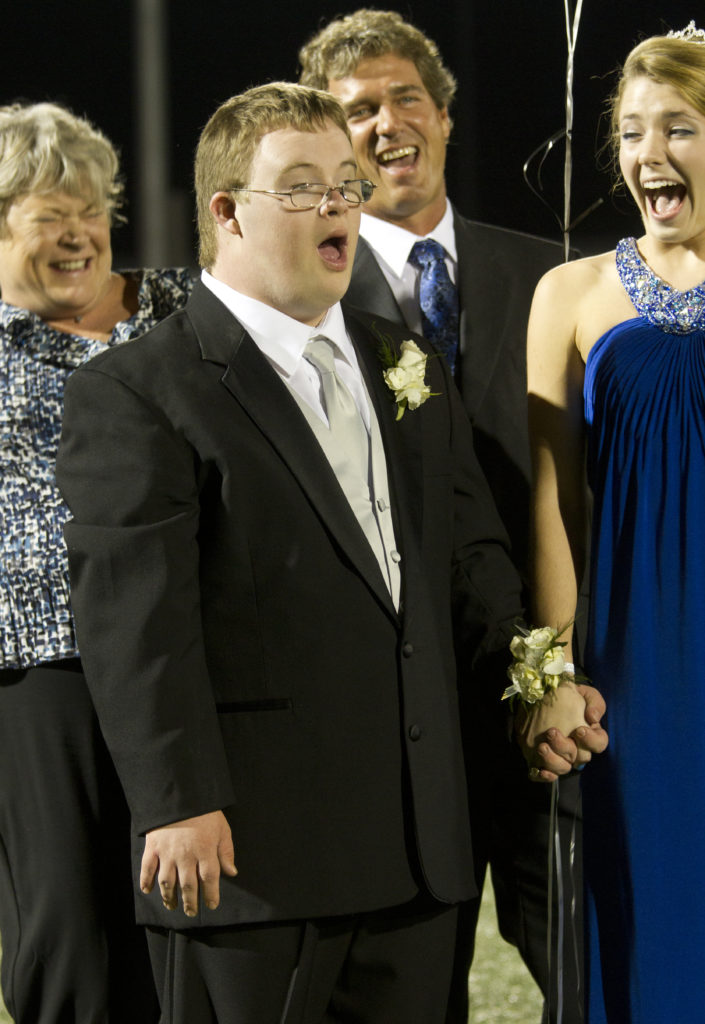 From left, Nancy Holmes, Owen Phariss, Bob Hughes and Audrey Hughes react as Phariss is named homecoming king during halftime of Free State's football game Friday night. Audrey, who was insturmental in getting Phariss on the ballot, was next announced as one of the two homecoming queens. 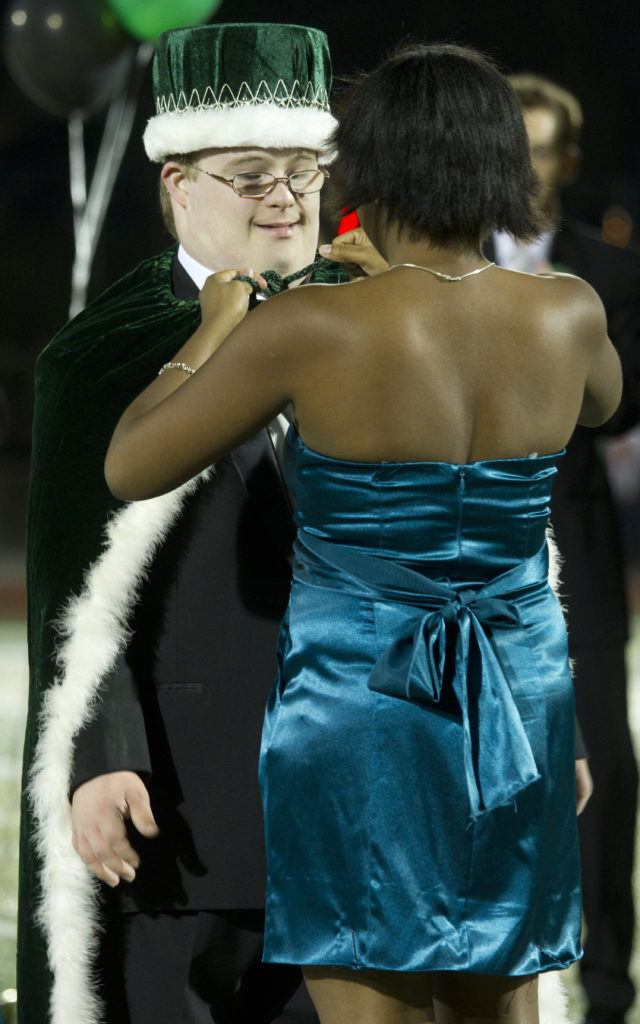 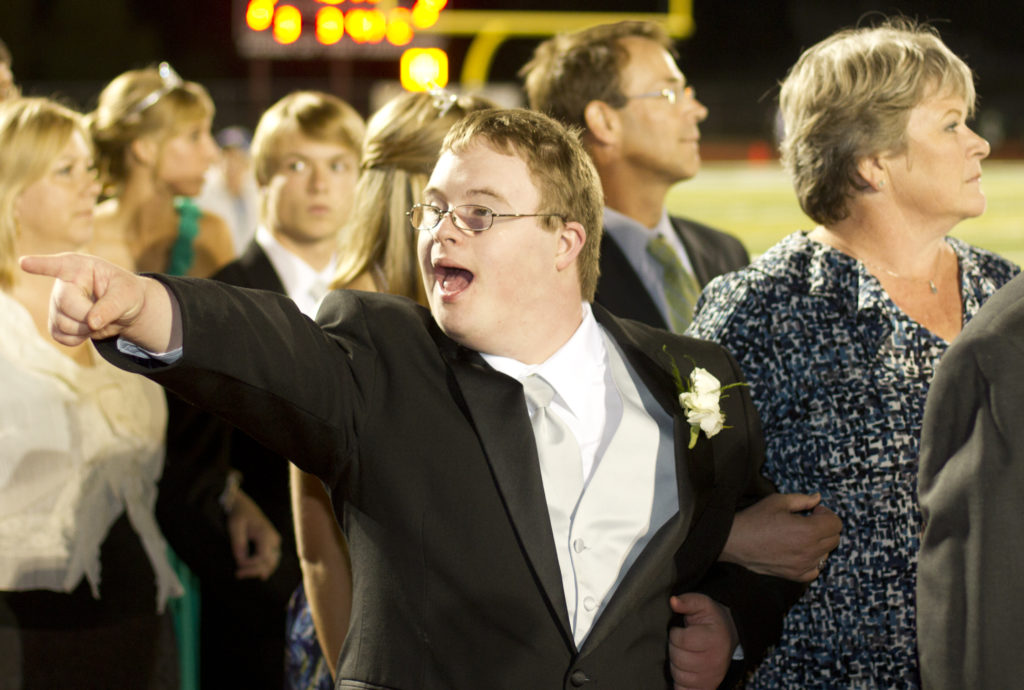 Owen Phariss points to a friend as he waits in line with his mother, Nancy Holmes, to be announced at the beginning of Free State's homecoming ceremony Friday night during halftime of Free State's football game. Phariss would be named homecoming king.

As the public address announcer named the 2010 Free State High School homecoming king, Nancy Holmes said it felt as if her heart had jumped out of her chest. Her son Owen Phariss, a senior at Free State, was voted king by his classmates Friday night — a vote that took more than 800 signatures to cast.

“I’m just so happy, so proud. He’s going to talk about this forever,” said Holmes.

Owen’s coronation almost didn’t happen. A previous school policy kept the names of disabled students off the ballot. “When we found out what happened we just knew it was wrong,” said fellow senior Aly Frydman.

Frydman and fellow classmates Audrey Hughes, Bailey Knowlton and Connor Caldwell collected signatures, approached the administration and had the rule changed. A few days later Owen and several other students were voted to the court, but on Friday there could only be one winner.

“I love all my friends at Free State,” Owen said as he shared a victory hug with Frydman, Knowlton and Hughes.

“We love you too, Owen,” the girls replied in unison.

You would think Owen would be the happiest to receive the crown, but it meant as much or more to his friends. “Him winning tonight is the best moment of my life. I couldn’t ask for anything more,” said Knowlton.

Holmes said that what makes Owen’s story so extraordinary was the fact that it was his peers who asked that the rule be changed. “If they hadn’t have done anything, nothing would have ever been changed. It would be the same as it ever was and anybody with a disability wouldn’t have been able to be nominated.”

As the old saying goes, “to the victor go the spoils.” In Owen’s case, that meant having two homecoming queens — Hughes and Rachel Heeb — on his arm thanks to a tie, a historic first for Free State.

A fairy tale ending to a night fit for a king.