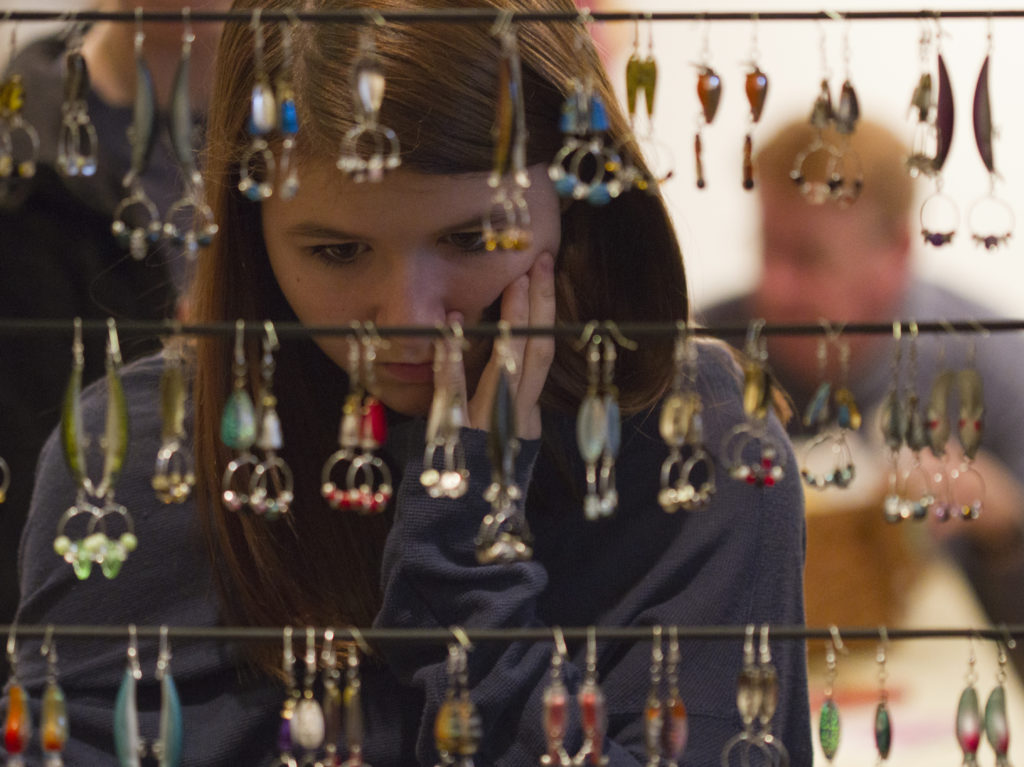 Josie Benz, 15, Charlotte, N.C., examines earrings made from fishing lures at the Bizarre Bazaar on Saturday at the Lawrence Arts Center. The event featured plenty of arts and crafts for sale and live music.

If there were a Black Friday for area shoppers looking for unusual, homemade, holiday gifts, it was Saturday’s annual Bizarre Bazaar. 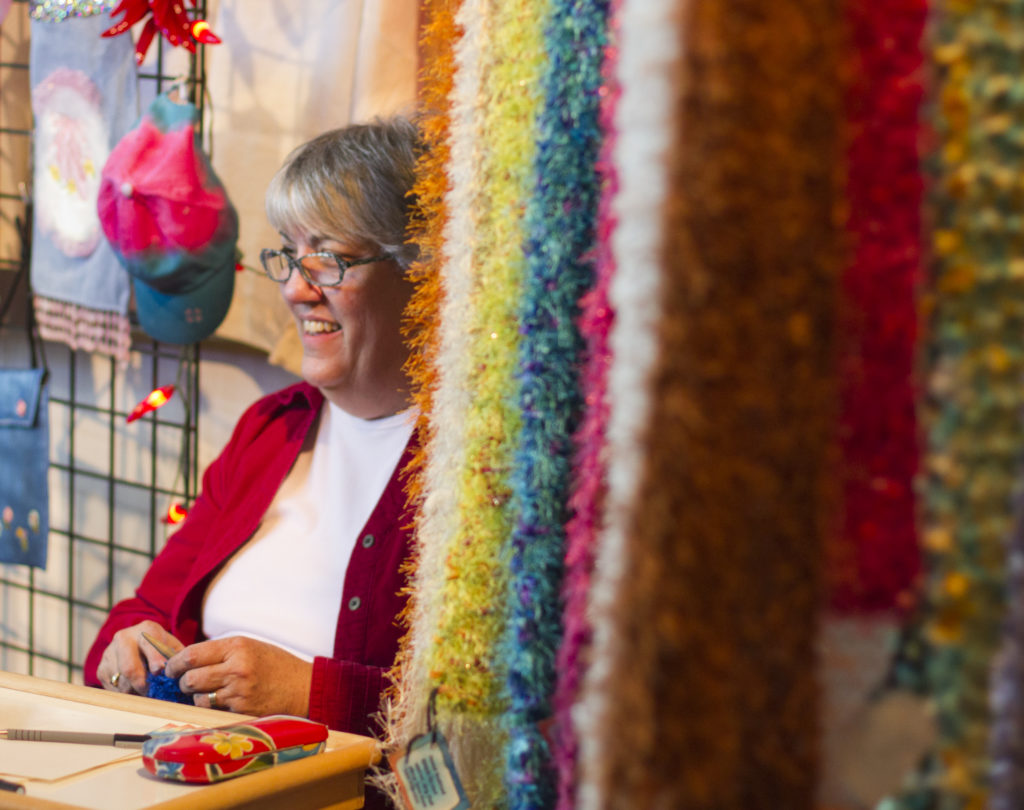 M.J. Nuss, Lawrence, knits a scarf while talking with shoppers at the Bizarre Bazaar art show held Saturday at the Lawrence Arst Center. The event featured plenty of arts and crafts for sale and live music.

Of the 150 artists showing off and selling their work at the Lawrence Arts Center, 940 N.H., there was the cuddly — Barbara Herhuth’s handmade stuffed animals; the less-than-cuddly — JerUSAlem Stone artworks from father-son team Ben and Sam Nachum; and the odd-but-for-a-good-cause-and-will-probably-be-a-conversation-starter-at-Christmas — Yvonne Channel’s plastic-molded “Bust ‘n’ Buns” that benefit organizations fighting breast cancer.

It’s a little unclear how long the Bizarre Bazaar has been going on in Lawrence — so this year’s event doesn’t have a number attached to the “annual.”

“They can’t remember exactly,” said event coordinator Kris Barlow — who spent her day serving turmeric milk mix topped with whipped cream. It was somewhere in the neighborhood of 20 years ago and was started so that somewhat unusual artists had a place to display their work, she said.

As hundreds and maybe thousands of visitors — no one counts the visitors, but it’s packed all day — mill through three stories of artwork, each artist, and each piece of art, has a story to tell.

In the basement, vinyl artist Desiree Warren sold clocks made out of the scraps leftover from the street-sign-making factory in her hometown of Ottawa. Brightly colored cityscapes, cowgirls and the popular dinosaur clocks lined her booth.

“Not just kids,” said Warren of the dinosaur clock buyers.

Warren’s been creating the artwork since 2005, when she started it as a final project for an art degree at Kansas University, and it’s blossomed from there.

Other artists weren’t as talkative, so the story behind their art remains a little more mysterious. Or maybe it’s just self-explanatory, like the “stuff boxes” from Independence, Mo., by couple Don and Verna Glore. Smooth, intricately carved wooden boxes that are simply “where you put your stuff,” Don said.

But they all fit in, and the odder pieces of work seem to draw the most attention.

Lawrence artist Dixie Lubin — one of the original artists at the event — said, while shaking one of her gourd-creature creations that doubles as a rattle, that there were only a few others when the Bizarre Bazaar began a couple of decades ago.