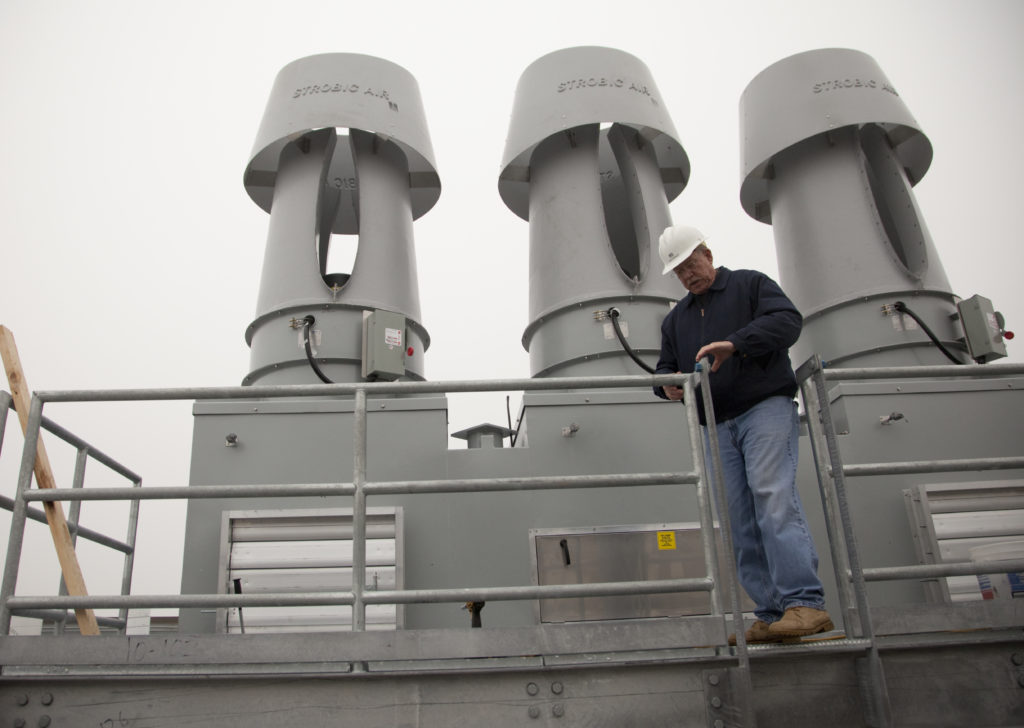 Dale Worley of Energy Solutions Professionals oversees the installation of new fans on the roof of KU’s Haworth Hall on Wednesday. Several of these powerful fans that have also been added to the tops of Malott Hall are energy efficient and will improve the ventilation of those buildings.

The maze of ductwork and towering fans on top of Kansas University’s Malott and Haworth halls might not be the most glamorous example of going green. But the new equipment promises to bring some of the greatest energy savings to the school.

The two buildings consume more energy than any others on campus. During the past few weeks, crews contracted under Energy Solutions Professionals were using cranes to lift the massive fans to the top of the buildings.

The upgrades to the buildings are part of $26 million worth of energy-efficiency improvements that Energy Solutions Professionals, an Overland Park-based company, is making at KU.

Those upgrades should save the school about $2 million a year. During the next 15 years, KU will use its energy savings to pay back the cost of the projects. Other improvements include replacing urinals, toilets and faucets to conserve water, replacing the lighting and updating equipment in the university’s steam plant.

About $14 million of the work that the company has pledged to do will be at Malott and Haworth halls.

Lab buildings traditionally cost three to four times more to operate than administrative or academic buildings, said Jeff Flathman, president of Energy Solutions Professionals. The company’s goal is to lower energy use in the buildings so they are only twice as expensive.

The big energy drain comes from fume hoods, the box-like structures that provide ventilation so scientists can safely work with dangerous chemicals.

Combined, Malott and Haworth have about 250 fume hoods, each of which has a dedicated exhaust fan leading to the roof.

When Energy Solutions Professionals performed its energy audit at KU, it found that 85 percent of the time the exhaust system was running the fume hoods weren’t being used.

Concerns with the massive amounts of energy consumed by these fume hoods have been around for awhile, but there hadn’t been a way to lower the energy needed to run them while maintaining safety standards.

“Fairly recently, the technology has advanced to the point where we can greatly reduce the energy consumption while enhancing the safety,” Flathman said.

The company will put into place a ventilation system that can detect when dangerous chemicals are present. The exhaust system from the fume hood will switch on and off accordingly.

In addition, the company reduced the number of fans needed to run the fume hoods from 250 to 12. The ones that went on top of Malott and Haworth halls each use as much power as a jet engine.

The other major cost of the project is replacing the heating and cooling equipment in the building, some of which is 60 years old. With these improvements, the company said KU should be able to shave $500,000 off its energy bills.