Behind the Lens: Photo postcards from the turn of the century 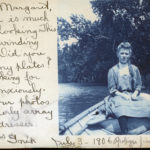 This photograph postcard from the early 1900's was a new way of combining home photographs and short text for long distance correspondence at the turn of the last century.

Mary, an amateur photographer, Facebooks her friend Mrs. Mable Cranston of Langdon, Kan., with a note and an attached photograph of her son Myron. It’s a little unusual because the photo is in black-and-white, the text is handwritten and the message sent in March of 1914.

OK, so maybe they weren’t Facebook buddies, but for the time period this was pretty cool stuff. For the price of a 1-cent stamp and a special postcard, Mary had printed her son’s photo on one side, added a note on the other and put it in the post. It was a turn-of-the-century social media exchange with user-generated content.

In 1898 the postal service established a reduced postage rate for privately printed postcards. In 1902, the Eastman Kodak Co. produced a postcard-sized photographic paper on which images could be printed. These two events began a photograph postcard boom.

Several years ago I collected personalized picture postcards. I had two preferences. It had to be a fairly interesting and authentic photographic image, hopefully taken by an amateur. To determine a real photograph you need to look closely, possibly with a magnifying glass. What you want is a continuous tone image. If you see small dots, it’s a reproduction.

My second preference was that the text on the card should relate to the image or mention the subject of photography. Sometimes this was difficult to determine because of illegibility of the handwriting. Who said our grandparent’s could write well?

Nevertheless, some of these short texts provided confirmation that hobbyist photographer’s were enjoying a new means of communicating.

Mary writes about her son Myron’s photograph, “I do not take many ‘fixed up’ pictures but just take these as he plays. His face does not show very plain but you can see he has yellow hair that curls. Am going to cut it soon & have a real boy.”

One 1906 card shows a photo of an automobile abandoned by the side of the road with a wheel broken off a front axle. “Fiasco No. 4” is written next to image on the card’s front.

Lula writes to her sister about her growing interest in photography and refers to the portrait of a couple on the card. “Tell that fellow his camera is all right but he don’t do his work right. I am in the business. What do you think of my work?”

With a good ink-jet printer, photo postcards are still a fun hobby. Companies such as Olympus and Epson, to name a few, offer digital photo postcard paper ready to print on and mail.