New workout harnesses the healing power of guffaws and giggles 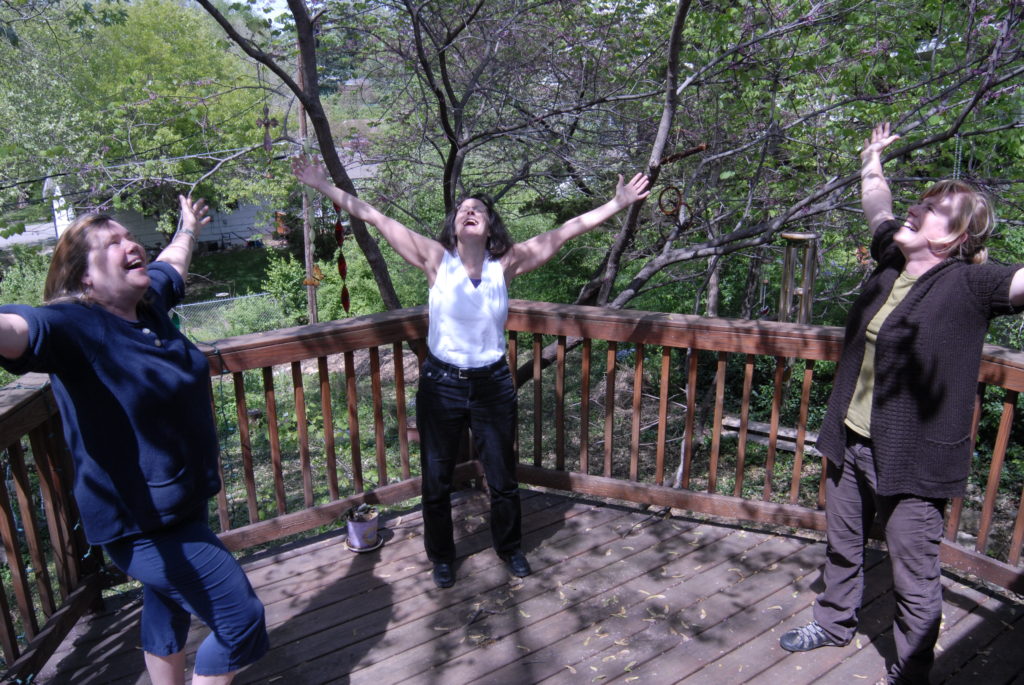 From left, Amy Schultz, Kathy Horton and Ellen Kearns engage in a session of laughter yoga. Schultz and Horton are instructors who can be hired for individual or group sessions; Kearns is a client who hired Schultz to lead a laughter yoga session at her workplace. 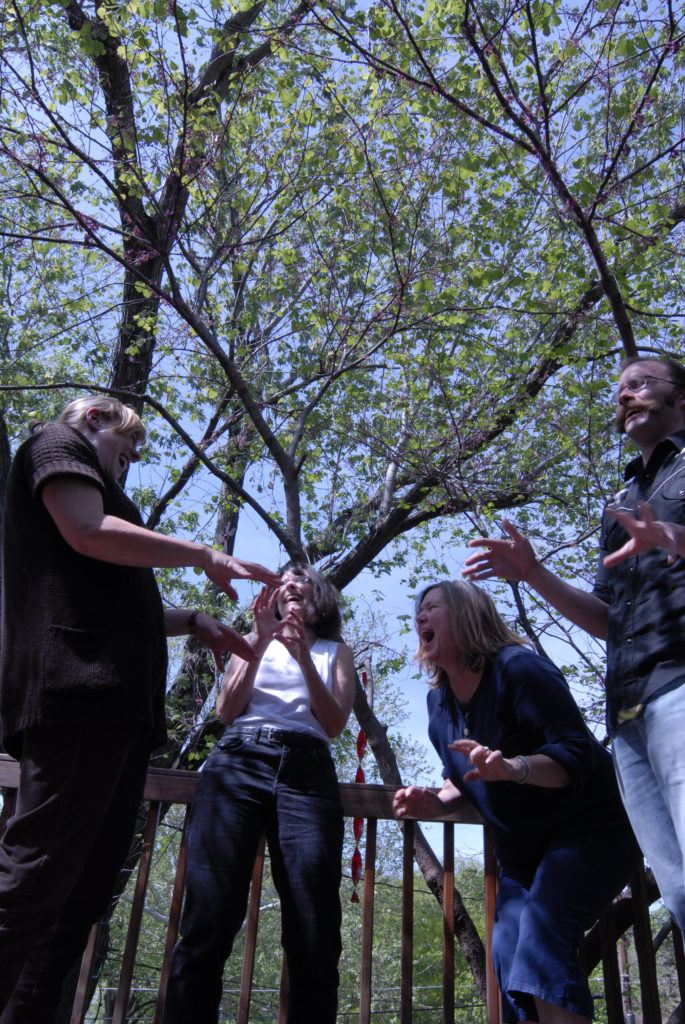 They say that laughter is the best medicine. What they won’t say is that you will look like a stark, raving lunatic when you take this particular medicine. Especially when you take the laughing pills. No, really — there’s laughter in a pill form. Only they’re invisible, you see.

“Laughing pills,” along with “shower laughter,” “handshake laughter” and a whole slew of other titter-based imaginary scenarios are all part of the inherently silly discipline of laughter yoga.

“It’s using laughter and movement to improve health, vitality and mood,” says Amy Schultz, Lawrence resident and laughter yoga instructor. “The laughter yoga that I use was invented in the 1990s by a cardiologist in India named Dr. Madan Kataria. He started noticing that his patients who were happy had much better outcomes. So he started having laughter clubs with his patients in India. They met about 20 or 30 minutes every day.

“The idea has spread around the world,” she adds. “It’s in over 70 countries, and there’s been a lot of publicity about it since its initial inception — on CNN and Oprah Winfrey among others. It’s really big in California, but it’s making its way all across the country.”

Rather than the somber, meditative pursuits of its ancient cousin, laughter yoga eschews the human pretzeling of traditional yoga for self-triggered fits of temporary insanity. The basic claim is that the physical act of laughter will trigger a body/mind reaction, stimulating the limbic system of your brain, which regulates emotion and behavior, and in turn can positively affect everything from stress levels to blood pressure. You’re kind of trying to trick your brain into thinking that it’s happy by engaging in that most physical manifestation of happiness — laughing.

Practitioners say there are also direct health benefits, minus the reverse psychology you’re performing on your brain.

“I have a lung condition, and I was looking for natural ways to increase my vital lung capacity,” Schultz says. “It makes my diaphragm stronger, and it helps oxygenate my system, to get more oxygen into my blood, which helps me have more energy and vitality. It strengthens my breath.”

That all sounds very advantageous and reasonable on paper, but when you see laughter yoga in practice — a group of people spontaneously bursting into spasms without a joke ever having been uttered — it looks a bit like mass hysteria. For some, that’s the appeal.

“I wanted an opportunity to make a fool of myself, I think,” says Ellen Kearns, who hired Schultz to lead a laughter yoga class at her office. “I liked it because it sounded so wacky. Co-workers participated, and it was great to see everybody just relaxing and laughing and being unhinged.”

Losing all inhibitions in public and braying like a deranged hyena isn’t for everyone, though.

“They told us in class that sometimes you’ll get a bunch of new people, and that it might be good to keep it a little toned down at first so you don’t scare people off,” says Kathy Horton, another instructor in Lawrence.

As clichéd and dopey as it might sound, however, laughter yoga can be serious business.

“There is a laughter club in San Diego that meets every morning on the beach,” says Schultz. “This club was started by an older woman who had lost her husband. She wanted something to help her with the grieving process, and laughter yoga helps to unleash your energy and your feelings. Even though at first if might seem disrespectful to use laughter, it will help a person to get through.”

The seemingly odd confluence of death and laughter yoga doesn’t end there. Schultz has even conducted a group session at a funeral. “I did one for a memorial service,” she says. “He was a really cheerful, joyful person, so they thought it was a fitting thing to do when we remembered him.”

No matter what you think its efficacy might be — or even if you think it’s just, well, laughable — those who practice laughing yoga insist it makes them feel better.

“I just liked the idea of happiness and spreading joy — that’s something I’ve always wanted to do,” Horton says. “I got in there and did it, and it felt really good.”

Amy Schultz can be contacted about attending one of her laughter yoga clubs or arranging a session at schultz.amy@att.net