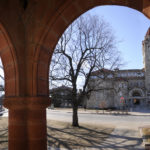 Viewed through the front arches of Spooner Hall is Dyche Hall, right of center. At left, in the distance, is Danforth Chapel and Fraser Hall.

Kansas University would need a security fence around it and metal detectors in each building.

Or the university could avoid that expense by allowing people with licenses to carry concealed weapons to take them on campus.

That would be the choice under a bill the House approved, 65-57, Wednesday.

Rep. Forrest Knox, R-Altoona, says his measure is a way to increase safety. Under House Bill 2685, if a city or state facility has a sign that indicates weapons are prohibited, the building would have to have equipment and personnel to make sure no guns get on the premises. To avoid that expense and hassle, the bill would require city and state facilities to allow concealed carry.

“Is putting a sign up, a meaningful effort” in providing security, Knox asked. “It all comes down to whether you believe allowing concealed carry makes a building more secure or less secure,” he said.

Currently, the regents campuses have a weapons-free policy. Knox said of the regents institutions, “Why are they worried about law abiding citizens” carrying weapons?

Knox said he believes the gunman who killed 32 at Virginia Tech University in 2007 would have been stopped more quickly if someone else had been carrying a concealed weapon.

But Reginald Robinson, president and chief executive officer of the Kansas Board of Regents, disagreed with Knox.

“It is our firm belief that allowing weapons on campus would significantly increase the risk of violence and harm to students, faculty and others, rather than making anyone safer,” Robinson said.

The measure now goes to the Senate for consideration. Knox said he doesn’t believe there is enough time in the legislative session for the Senate to give the bill attention, but said he hopes to push for the measure next year.