You can’t ignore John Hughes and his Brat Pack 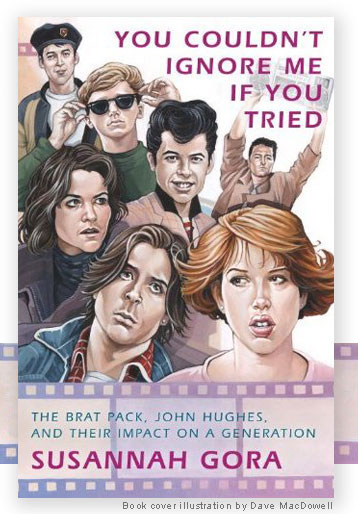 Anyone who has read even a little about John Hughes, the writer-director who portrayed teenagers with rare sensitivity and respect in 1980s films like “The Breakfast Club” and “Ferris Bueller’s Day Off,” probably knows he did not grow up an alienated, overly sensitive outsider. By all accounts, he was a normal, fairly popular Midwestern kid untroubled by the sneering socialites, out-of-reach girls and vengeful teachers who populated his movies.

How, then, did he create such wonderfully true characters as Molly Ringwald’s sulky Samantha Baker in “Sixteen Candles,” Judd Nelson’s swaggering John Bender in “The Breakfast Club” and Jon Cryer’s selfless Duckie Dale in “Pretty in Pink?”

In other words, why did Hughes become the most resonant and enduring voice of adolescent experience since J.D. Salinger?

Chatty, upbeat and rarely critical, Gora invites us to pop in our favorite DVDs, break out the junk food and listen to her stories. She’s short on insight but long on minutiae: casting choices, on-set smooches, soundtracks that could have been, scripts that never were. It’s fluffy stuff, but Gora’s solid research — she interviews most of the principal players — produces some fun facts.

Maybe you already knew that Hughes’ go-to geek, Anthony Michael Hall, began dating Ringwald on the set of “The Breakfast Club,” despite his braces (which he no longer needed but kept for the character). But did you know that Duckie would have ended up with Ringwald’s Andie in “Pretty in Pink” had a teenage test audience not booed them down? And that it was Rob Lowe’s idea to use a Bic lighter and an aerosol can to visually illustrate the theme of 1985’s “St. Elmo’s Fire?”

Wait — what does that execrable yuppie film have to do with John Hughes? Nothing, but remember: This is a Brat Pack book. Actually, it’s a Gora’s-favorite-movies book: She devotes a whole chapter to Cameron Crowe’s non-Brat movie “Say Anything” (1989), mostly because she loves it.

Gora’s journalism skills kick in when she explores the ramifications of the media-created term “Brat Pack.” In 1985, New York magazine sent writer David Blum to profile Emilio Estevez, who showed up at the Beverly Center Hard Rock Cafe with Lowe, Nelson and other friends in tow. After a high-spirited night with these good-looking, high-living Hollywood youngsters, Blum came up with a snappy name for them — and boy, did it stick.

The June 10, 1985, cover story made instant celebrities of Estevez and Nelson; it also tried to rope in Nicolas Cage and Matthew Modine. As for Ringwald, Hall and Ally Sheedy, they became Brats by association.

Whether Blum’s story made or destroyed careers is debatable, but it clearly split up the Pack. Gora talks to actor after actor whose freewheeling evenings came to a sudden halt when everyone began avoiding each other to shake the dreaded Packer label. “We were friends,” Sheedy says. “I had felt truly a part of something, and that guy blew it to pieces.”

And what of Hughes? After 1987’s “Some Kind of Wonderful,” he was done with teen movies: “I had shot enough high school hallways,” he said in a 1988 Newsday interview. He discarded his young muses, Ringwald and Hall — Hughes was known for ending long friendships brusquely — and began making broad, high-grossing comedy fare like “Home Alone.” The hits dried up in the late ’90s, but by then he was independently wealthy and had moved his family from Los Angeles back to Illinois, the place he always called home.

Hughes stayed out of the public eye but, again like Salinger, kept writing. At least one person in Gora’s book is convinced he was sitting on a treasure trove of scripts. There’s another Salinger similarity: Hughes’ death by heart attack last year means we can stop knocking at his door, hoping to discover the big Why behind his particular genius. His works simply stand, and we’ll have to let them.