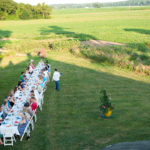 About 50 people gathered at Prairie Star Farm in De Soto to participate in the Free State Brewing Company’s inaugural Beer Dinner on the Farm event.

De Soto ? Chef Rick Martin thinks there is a huge disconnect between people and their food, but he’s been working on a way to change that.

For more than two years, Martin, who works at Free State Brewing Company, 636 Mass. in Lawrence, has wanted to plan an event that would show people where their food comes from and have them meet the people who grow it.

He got that opportunity Saturday night as the restaurant conducted the inaugural Beer Dinner on the Farm at Prairie Star Farm in De Soto.

“This makes the ultimate connection,” Martin said. “Eating the local food on the farm where it was grown with the people who grew it. I think that makes a very powerful connection.”

The farm was chosen because it already provides fresh vegetables to the restaurant.

Around 50 people from the area came out to Prairie Star farms to enjoy the locally grown fare.

One long table outside next to the farmhouse was set out to seat the guests who paid $68 for the event.

The third course was a meggyleves — a cold soup — made with tart cherries, creme fraiche and cracked pepper. It was paired with Raspberry Old Stormy, which also used the farm’s raspberries.

The fourth course consisted of braised lamb from Sweetlove Farm in Jefferson County, along with roasted baby vegetables, potato gratin in a stock reduction and paired with the Ad Astra Ale.

And for dessert was a raspberry chocolate trifle from Sleepy Jean’s chocolates and caramel mousse. It was paired with a new and specially brewed Storm Cloud Stout.

Bart Hall, who runs Prairie Star Farms with his wife, Margit Hall, said he enjoyed the event because it allowed him to see, talk and eat a meal with the people who eat his food.

He said that makes what he does worth the effort.

“The privilege of working on the land is part of our profit,” Hall said.

“I get to share the food directly to people,” Holman-Herbert said. “I get to see their faces and shake their hands and talk with them. I want to forge that relationship that goes from our soil through our animals, through our coolers and freezer, to the mouths of the people that want to eat it. It’s a unique bond that is not as common as it once was.”

While this was the first farm dinner, Martin hopes it won’t be the last.

He is currently looking at other locations to have another farm dinner in the future and hopes to have one at the Sweetlove Farm soon.

“I want this to be a very sustainable idea,” Martin said. “This isn’t just one-and-done. This is designed to be mobile, and that’s my goal.”

More information on the next farm dinner will be made available through Free State’s newsletter.