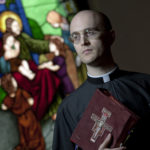 Father Matt Schiffelbein, pictured in July 2009 at Church of the Ascension in Overland Park, says it’s frustrating to be a new priest and to battle perceptions of the Catholic Church as the sexual abuse scandal unfolds. He says his role in the church is to be a good shepherd and to re-establish the public trust that has been eroded. New priests are now required to undergo training on issues relating to abuse and how to spot it.

Andrew Strobl, a Catholic priest serving in Olathe, trained to become a priest in the shadow of the sexual abuse scandal that shook the church a decade ago.

He said he was entering the church to live a life of service to God. But the reaction of friends and family when he entered the seminary made him realize that new priests have a lot of work in front of them.

“People would tease you about that,” Strobl said. “They’ll call you a pedophile.”

Matthew Schiffelbein, who was ordained in May and serves as associate pastor at the Church of the Ascension in Overland Park, said it’s a reality that new priests must learn to face.

“It’s frustrating,” he said. “This is the world that we live in.”

For Schiffelbein, his position also offers an opportunity to move beyond the church’s sexually abusive past.

“My role in the church is to build trust,” he said. “And be a good shepherd.”

As part of their training, seminarians are now subjected to rigorous training about sexual abuse, all with the goal of preventing and spotting potential sexual abuse in the church.

The training brings a new awareness to clergy about the issue of sexual abuse, said the Rev. John Schmeidler, a priest at St. John’s, who began training for the priesthood 20 years ago.

“I don’t even really remember hearing sexual abuse in any realm,” he said. “That had never really occurred to me as I was entering into the priesthood.”

But the new programs help ensure that all clergy are educated on the issue of sexual abuse, Schiffelbein said.

“It was an eye-opening experience,” he said. “You’re (trained) to see patterns of behavior that could lead to abuse.”

Strobl said it’s a challenge to balance being aware of sexual abuse, but not being overly paranoid about it.

“You have to make sure you’re not overreacting or under-reacting,” he said.

But the training and awareness are worth the effort if it prevents abuse, he said.

“We’re outraged at what happened,” Strobl said. The ultimate goal is making the church “a safe, friendly, joyful place for kids.”