Source says league could survive, with Oklahoma in North 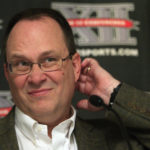 Big 12 Commissioner Dan Beebe listens to a reporter’s question during a news conference following the final day of spring meetings on June 4.

A source close to the situation told the Journal-World late Sunday night that the Big 12 Conference appears to have moved closer to an agreement with its remaining schools to keep the league together and that Oklahoma University will move to the North Division.

The source said it was unknown whether the Big 12 would move forward as a 10-member league or if it would look to add two new members to replace Colorado and Nebraska, which left for the Pac-10 and Big Ten, respectively, last week.

The news Sunday flew under the radar of reports out of Texas that said Pac-10 commissioner Larry Scott was on a plane bound for Kansas City, Mo., to meet with KU officials.

“That’s a back-up plan,” the source said. “It looks like the Big 12 is staying together.”

The Big 12 appeared to be all but dead just days ago, but a late move by commissioner Dan Beebe might have saved it. Reports indicated that Beebe lobbied hard this weekend with schools in Texas and Oklahoma to convince them to move forward with the Big 12 schools that remained. His selling point was talk of a reworked television deal that would push the per-school payouts to the nearly $17 million annually that’s close to what the SEC pumps out each year and in the neighborhood of what the Pac-10 was eyeing. What’s more, Beebe was reported to have told the University of Texas that it would have permission to proceed with its own network in the future, something the Longhorns have wanted for years.

This news falls in line with what Oklahoma athletic director Joe Castiglione has said all along.

“I understand people are writing this like the ship has sailed and there really isn’t any way the Big 12 could stay together,” Castiglione told The Oklahoman. “I just don’t think this is true. I think there’s still a way for us to stick together and be viable.

“There’s still proof that 11 or 10 teams together can create some significant value — even more than where we are with 12.”

A meeting of the UT regents scheduled for Tuesday likely will go a long way toward determining the outcome, and concerns remain over Texas A&M’s flirtation with the SEC.